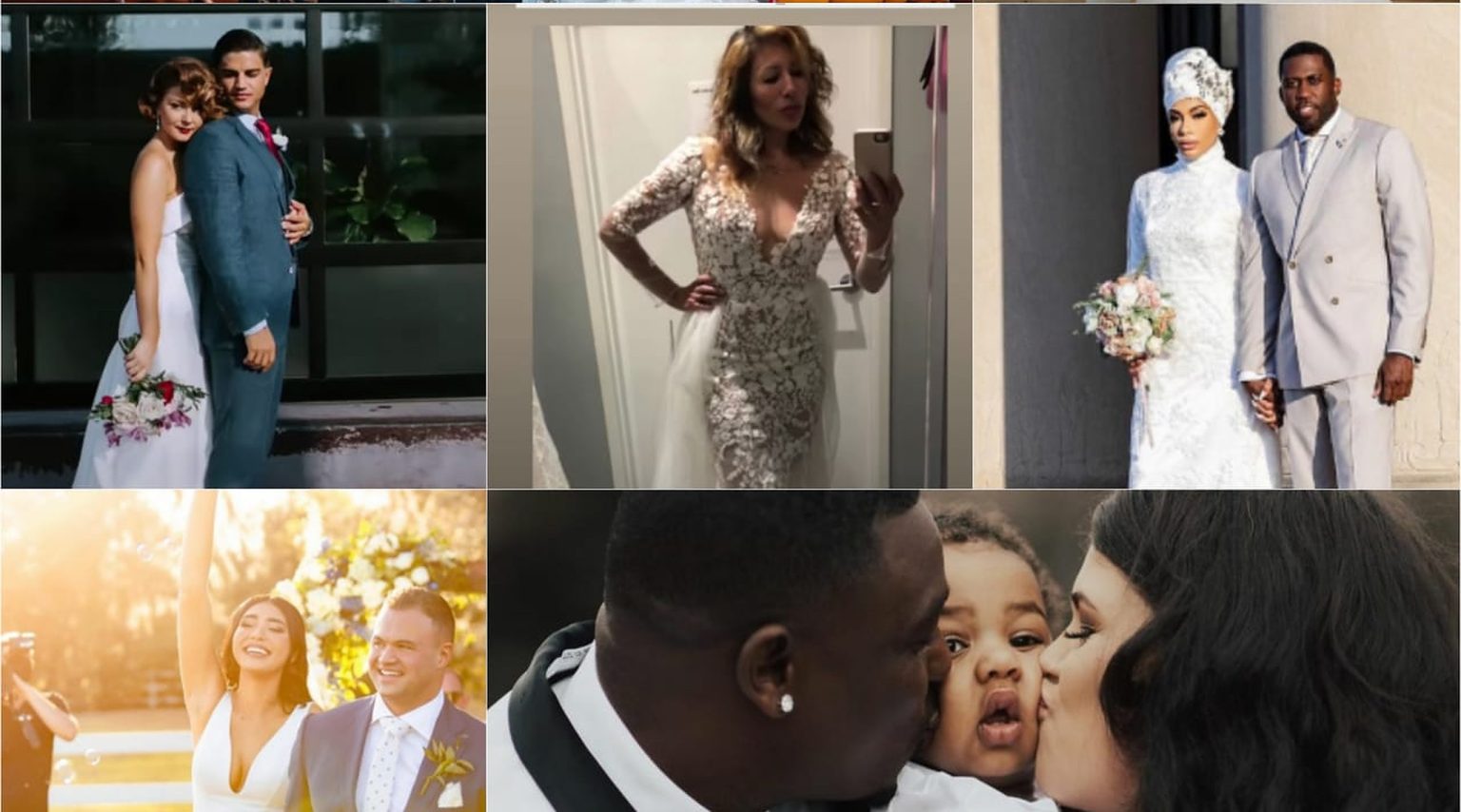 90 Day Fiance Season 9 finally aired its finale earlier this month. Surprisingly, all the seven couples decided to walk down the aisle. The couples finally reached their destination with lost hurdles, challenges, and ups and downs. When we were first introduced to cast members, it was certainly unbelievable that any of them would end up getting married. While Mohamed was unhappy with Yve’s culture and styling, Shaeeda struggled to sign a prenup.

To the very last moment, Kobe found it difficult to hide Emily’s pregnancy news from her parents. Meanwhile, Thais was homesick right before the wedding. Jibri and Miona were dealing with a financial crisis. Although things seemed fine between Kara-Guillero and Ariela-Biniyam, they had their issues to deal with. Fighting the hurdles, the seven couples are now married. TV season Spoilers is here with the wedding pictures of Season 9’s happily married couples.

The 90 Day Fiance couple Kobe and Emily met each other in China. Their one-night stand led to Emily getting pregnant with their first child. Later, when Kobe received his K-1 visa, the couple started living together. Recently, Emily again got pregnant with their second baby. Finally, the couple made it and got married in the season finale. Here are some of 90-Day Fiance Season 9 couple Kobe and Emily’s wedding photos.

Ariela and Biniyam had also gone through a fair share of tensions and struggles. The couple met in Ethiopia and later started dating each other. After three months of their relationship, Ariela learned that she was pregnant. Eventually, the family returned to America after receiving the K-1 visa, which included their son Avi and boyfriend Biniyam. Thankfully, the couple finally got married, and here are their wedding photos.

Yve and Mohamed make one of the most controversial couples of 90-Day Fiance Season 9. The major hatchback in their relationship was a culture mad lifestyle difference. Yve is quite a vocal and modern lady. But Mohamed had different expectations from his wife-to-be. Besides, this age gap was the major issue. However, with love, loyalty, and honesty, the couple fought all the challenges and finally walked down the aisle. Here are some pictures from Yve and Mohamed’s wedding.

The major issue in Bilal and Shaeeda’s relationship was trust. Bilal wanted his wife-to-be to sign a prenup and expected her to be fine with it. After talking to his mother, she finally agreed, and they happily got married in the finale. Have a look at this beautiful 90-Day Fiance’s couple wedding photos.

Patrick and Thais have been a happy couple since the beginning of the series. They enjoyed each other’s company, went out, and had a good time. However, things seemingly fell apart once Thais’ dad disapproved of their wedding and asked her to return to Brazil. Moreover, she also admitted that she was homesick. Battling everything, their love won in the end, and the two of them made it to the aisle. Have a look at the breathtaking pictures from Patrick and Thais’ wedding.

Kara and Guillermo’s love story started when she was on a work trip. They fell in love and later got engaged, something that her parents were against. Nonetheless, Kara and Guillermo’s listened to their heart and tied the nuptial knot for eternity. Without further ado, have a look at this amazing video, including the wedding pictures of 90 Day Fiance Season 9 stars Kara and Guillermo.

Jibri and Miona are blessed with a beautiful love story. The former met the latter while he was performing for his band in North Serbia. The instant connection led them to date each other, and later they moved into his parent’s house in South Dakota. Struggles started when his parents asked them to move out and do something of their own before getting married. Fortunately, this couple also got married, and here are their wedding photos.

Here was a quick look at all the pictures from 90 Day Fiance Season 9 couples’ marriage ceremonies. Stay tuned to TV Season & Spoilers for more updates. Please take a look at the video below: