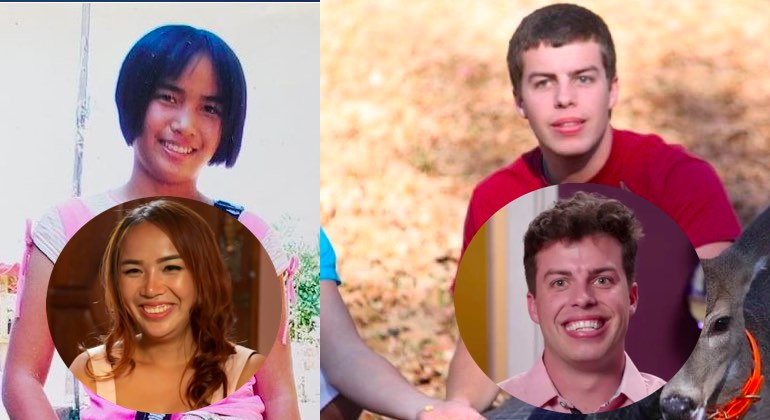 You wouldn’t believe but the 90 Day Fiance franchise has only been running for seven years. Well, it hasn’t been long since the show debuted, and today, it is far more popular than many of the long-running reality shows. With eight seasons of the main show and plenty of spin-off series, this unique franchise is ruling national television right now. It has introduced way too many stars by now, and almost all of them stay connected to their fans. Besides, some of the fan-favorite celebs now have thousands of followers on social media.

People like to follow their lives and desire to know more about the past lives of their favorite cast members. As a result, some of the throwback pictures of these stars have been going viral. Hence, check out some of these unseen and rare pictures of 90 Day stars that will totally blow your minds away.

Annie and David Toborowsky are amongst the veteran cast members of the show. Yet, they continue to appear on its different spin-off series. The couple became fan-favorite soon after they tied the knots and have continued to rule our hearts ever since. Well, both of them have changed a lot since they first appeared on the show. However, Annie recently uploaded an awkward teenage picture of herself, that has been doing rounds on the internet. The young TV star was only 13 or 14 years old in the throwback photo and looks super adorable in her funky hairstyle.

It hasn’t been long since fans were introduced to Jovi as he appeared on the most recent season of 90 Day Fiance. Within months, Dufren has become an absolute favorite and has a major fan following now. Well, it wasn’t Jovi who uploaded an older picture of him, but it was his mom. Gwen Edymard, who has often appeared on the show, posted a TBT (throwback Thursday) picture of her son. Jovi, in his teen years, posed with baby deer.

Fans went crazy when they saw this picture as Dufren looked super adorable in his short haircut. Since then, they’ve been asking Gwen to show them more pictures of the younger Jovi. Well, we hope she grants the wish soon.

Well, Colt Johnson has been way too popular to not be on this list. He initially appeared on the show with another popular cast member, Larissa Lima. After their nasty divorce, Colt went on to do some spin-offs of the show and dated a few other people. Eventually, he found love in his best friend

Vanessa Guerra, and the two of them even got married. Recently, on father’s day, Colt uploaded a heartwarming post dedicated to his late father.

He posted a picture with him when he was a young teenager. The post got a lot of love from fans, who paid their condolences to Johnson’s loss. Moreover, they also pointed out that young Colt looks very cute. His followers have been asking the TV star to upload more pictures of him.

90 Day Fiance Season 7 stars Robert Springs and Anny Francisco became fan-favorite soon after their first appearance. The couple eventually got married and welcomed their first child later on. On the other hand, only seven months after their daughter was born, Robert and Anny confirmed that they’re having a second baby

. Anny’s due date is only a few months away, and we might soon get to meet Brenda’s little sibling.

Anny recently uploaded some old pictures of her on her Instagram stories. The TLC celeb currently looks nothing like herself, and fans were thrilled to see the young Anny. Hence, they’ve now been revisiting some of her initial social media posts.

Syngin Colchester and his wife Tania Maduro were first introduced to fans in the seventh season of the show. Years after that, the couple still appear on some 90 Day Fiance spin-off series. While Tania looks almost the same, there’s a significant difference in Syngin’s appearance today. Fans have been loving his beautiful long locks and want him to keep it that way. Colchester recently uploaded a throwback picture of himself and talked about how he gained some “covid weight”. The TLC star is now planning to start his fitness journey.

Who is your favorite 90 Day Fiance star? Let us know in the comments below and keep coming back to TV Season Spoilers for more TLC updates.