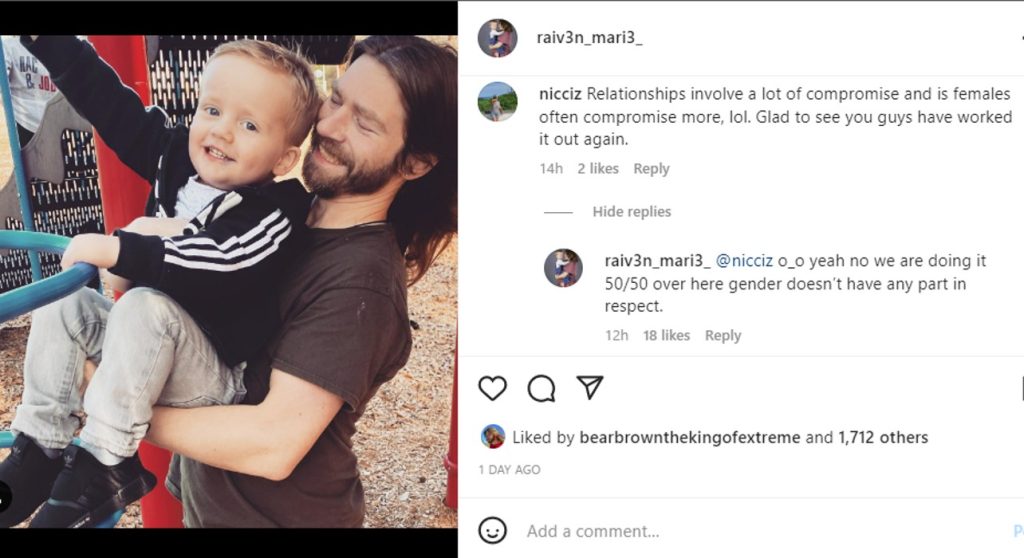 Bear and Raiven are the most widely discussed and controversial couple of Alaskan Bush People. The pair met at Noah Brown’s wedding, where Raiven came with her mother, who was photographing at the event. However, the two clicked started dating and got engaged the following year, in 2019. Bear and Raiven have had a roller-coaster relationship with several on-and-offs. They separated quite a few times before finally tying the knot in January 2022. Things did not work well there too, and Raiven recently announced separation in December last year amid a baby. Although, it seems like they are working out 50/50, maybe for the sake of the baby, for themselves, or both. Keep reading to explore the right reason with us!

Raiven and Bear Brown share a two-year-old son, River. The couple announced their second pregnancy in July last year. Further, the baby is due by the end of this month. People who follow Alaskan Bush People closely would know that Raiven suffered a miscarriage after River. The incident occurred in her 20th week of pregnancy. She also shared a happy milestone post after she crossed the 20th week with the upcoming baby. Surprisingly, the police had arrested Bear Brown under the charges of domestic violence three months after their marriage, i.e., April.

Although Raiven again came to his rescue and the police dismissed his charges. Additionally, a few months later, she also announced her pregnancy. During her second pregnancy, the photographer took several breaks from social media owing to its toxicity. Initially, she also unfollowed her husband, Bear Brown. This hinted to fans that something was cooking between the two. However, the mother of almost two followed him back again.

Raiven is a social media bee who cannot keep up without updating her life to her fans and followers. Recently, she posted a picture of her husband and child, Bear and River, respectively. Bear had held River in his hand while the little kid was smiling, hanging to swing. Fans were happy to see that the couple was trying to work things out. A fan commented that relationships involve a lot of compromises, and most females do it more. However, the user was happy that Bear and Raiven worked together.

If the books and everyday houses rule out, compromise parallels women. However, Raiven responded by saying that the couple is doing their 50/50 and gender doesn’t have any part in respect. The Alaskan Bush People alum feels that working out a relationship is sanely a two-people’s job and not a gender-based rule book of one doing more than the other. The couple had also celebrated Christmas together, which is not surprising for fans.

People have seen their relationship break over the years and then rekindle anyhow. This seems like another form of breaking and patching up. Another speculation predicts that maybe the pair are together for the sake of their children, especially when it is such a crucial time with baby number two coming up. Will they get back together again? For more exciting news updates, stay tuned to TV Season & Spoilers.