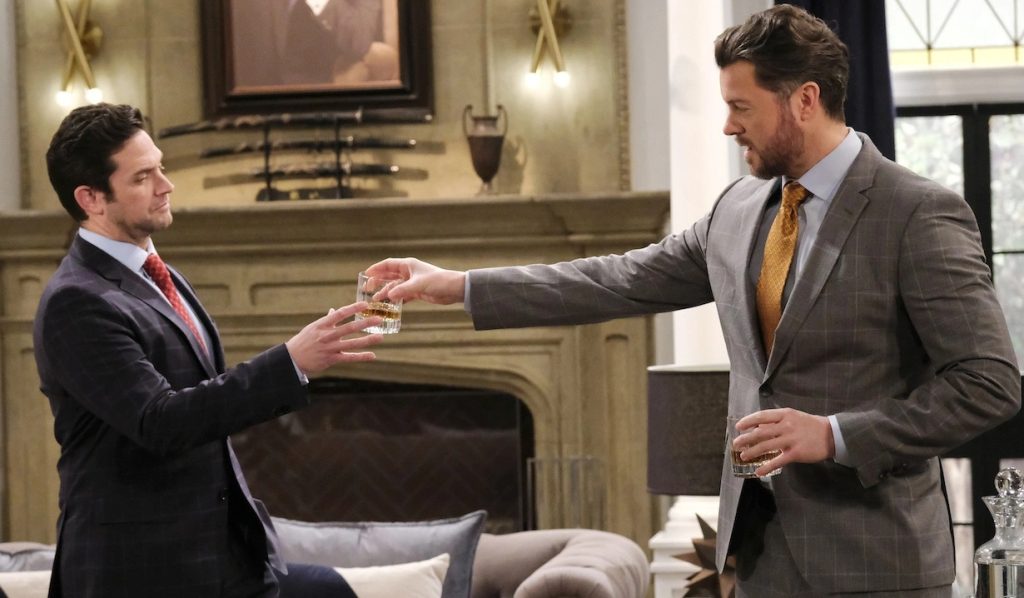 Days of Our Lives recap for Tuesday, September 20, 2022, revealed the story of Stefan and Craig. EJ wanted Stefan’s help to get Gabi’s shares and disqualify Ava from the board. Stefan was hesitant and claimed he wanted to hear the entire plan first. Chad walked in on them and was surprised to see Stefan. He explained about Dr. Rolf and his treatment, Chad was not happy to start fresh.

Leo told Gwen he believed Craig was the killer. Gwen agreed to tell Rafe about this theory and allowed him to hide in her room. Craig met Nancy and Clyde at the pub and told him he felt responsible for Leo’s crimes. He was here in Salem after hearing about his recent crimes.

In this episode of Days of Our Lives, we saw Stefan pacing hard when EJ DiMera brought up Gabi’s name. EJ asked Stefan why he was hesitant in bringing down Gabi if he did not love her. Stefan said he wanted to know the plan first. EJ told him the plan would help him get his shares back from Gabi. Furthermore, this plan would make the votes a tie – so they will have to change someone’s votes or get Ava’s vote disqualified.

Meanwhile, Chad talked to Jack at Horton house. He told him he did not know if Leo was guilty or innocent. Later, Chad went to the DiMera mansion to get Charlotte’s stuffed elephant. Chad discovered Stefan and EJ in the living room and received the shock of his life. Stefan explained how Dr. Rolf had kept him alive. However, Chad was cold toward his brother and rejected his attempts to start fresh.

would be hesitant to accept his return. Of course, Chad snapped and told Stefan, Abigail was dead, she had been murdered. Stefan expressed his condolences. Chad left to find Charlotte’s toy. After that, EJ and Stefan continued to plot their plan against Gabi.

At the Horton house, Jennifer was uncomfortable when Jack brought a tray of ice cream sundae. This was Abigail’s tradition and Jennifer was not sure if they should honor it. Jack suggested they should do it with the kids and they discussed memories of Abigail as a child. Later, Jennifer realized Abigail would have wanted for her to enjoy the ice cream and had some.

Meanwhile, in this episode of Days of Our Lives, Leo arrived in Gwen’s hotel room. Leo insisted Craig was a crazy person who was out to avenge him. Gwen was skeptical but Leo convinced her Craig was responsible for Abigail’s death and Sonny’s attack. Gwen told Leo she would inform Rafe about this and let him hide here in her room.

Speaking of Craig, he told Nancy that he came back to Salem after hearing the accusations about Leo. Furthermore, he blamed himself for Leo’s actions. Nancy and Clyde assured him he could not have known what Leo was capable of. Craig suggested a round of drinks after he heard about their engagement. Days Of Our Lives airs weekdays on NBC and Peacock. Stay tuned with TV Season & Spoilers for the latest news and updates.