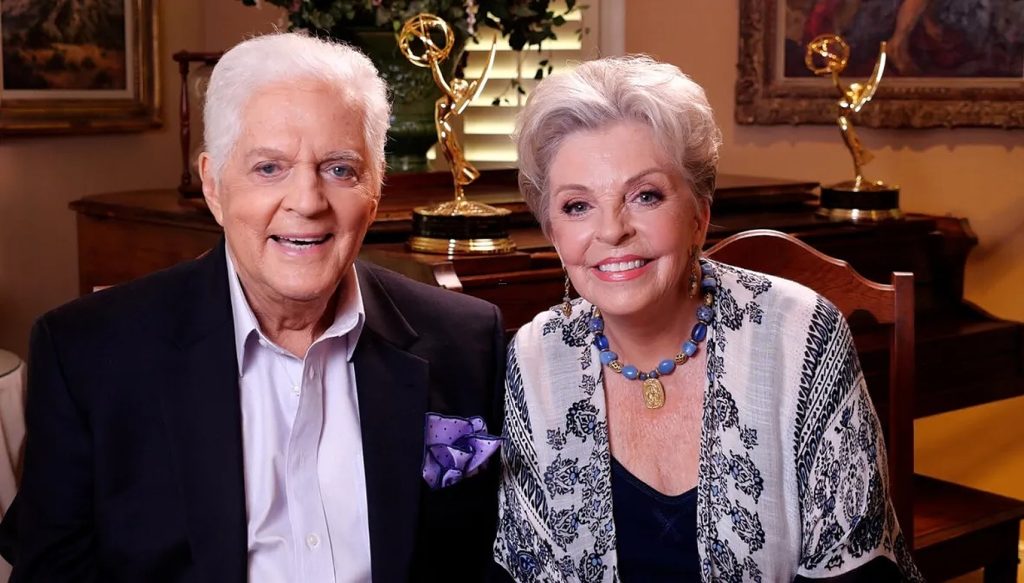 Getting a loving partner who will stay by your side in all your thick and thins is a true blessing. While Days Of Our Lives puts all their couples through a hard time, some are able to pull through, while some break each other’s hearts. Fans love to see couples going on extreme ways just to be with the love of their lives. Thankfully enough, the real-life situations of these actors is not that complicated. Many of the actors have found the meaning of true love in their better half. Not to mention, they look amazing together. Here are some of our favorite actors and their real-life partners.

On Days Of Our Lives, Crystal Chappell played the role of Carly Manning and shared the screen with her on-screen partner Lawrence Alamain played by Michael Sabatino played the role of Lawrence Alamain. On-screen, Carly always wanted to get far away from Lawrence. She never was ready to face him. Later, fans learned that they both had an affair that led to Nikolas’ birth. However, to her bad luck, when she and Lawrence decided to raise the child, Lawrence died in a car accident. No matter how scary and pitiful the situation Crystal and Michael’s characters had to go through, the love for each other in real life has its own beauty.

The couple fell in love with each other on the sets of DOOL. They both joined Days of Our Lives in 1990. They shared how they only had a few shots initially. But things changed in 1992, at Shelley Curtis’ party; they both had a moment when they felt the spark and knew that it was time. In 1997, they both got married and had two sons together. Last year, over Instagram, the couple shared the good news with their fans. Sharing the pictures of their grandson, Zeke, the couple announced becoming grandparents. In addition, earlier this year, they shared another good news about their younger son’s graduation from high school.

Days of Our Lives: Paul Telfer

Next on our list is Paul Telfer, who plays the role of Xander in Days Of Our Lives. On DOOL, Xander and Sarah are in love. Following this, they decided to get married on the soap opera. However, instead of exchanging vows, Sarah landed in the police station as people suspected her of being Abigail’s killer. In all this, their marriage got halted. They both went through a lot, starting from interrogation to searching for evidence. After clearing Sarah’s name, the couple finally rushed back to get married. However, in real life, it is not the case with Paul. He is happily married to a theatre actress and singer, Carmen Cusack.

Just a few months back, he even celebrated his wife’s birthday. Paul has been very active when it comes to displaying his wife’s achievements on his social media. He appreciates her as much as he can. The couple got married in 2012. Carmen has shared in most of her interviews that it was Paul who made the first move.

Further on the list, there is Carson Boatman, who plays the role of Johnny in Days of Our Lives. As for now, Johnny is getting super close to Ava on the soap opera. They even shared an intimate moment together. However, fans know that Ava is plotting against EJ to acquire Jake’s share. So, it is not known yet if Ava really likes Carson or if he is just a pawn in her play. However, in real life, Carson has already started his married life. He is happily married to Julana Dizon. Recently, the couple celebrated their one-year anniversary. They shared their pics on Instagram for fans to take a little peak into their love life.

Days of Our Lives: Bill Hayes And Susan Seaforth Hayes

Lastly, let’s talk about this amazing couple – Bill and Susan. A couple who have been with each other since 1974. Bill plays the role of Doug Williams, while Susan played Julie Williams. This couple was the first super-couple of Days Of Our Lives. In the 1970s, Julie met ex-con Doug, and they both fell head over heels for each other. However, in real life also, they fell in love.

In 1974, the couple got married. While on-screen, Julie and Doug married two years later, i.e., 1976. They became the first soap couple ever to get clicked for the Time magazine’s cover. This powerful couple has been like a pillar of support for each other since they married. These love stories are beautiful, and we hope that you enjoyed them. Who is your favorite? Comment down below. TV Season & Spoilers will bring you more interesting updates of your favorite soaps and actor. Make sure you tune in and enjoy.