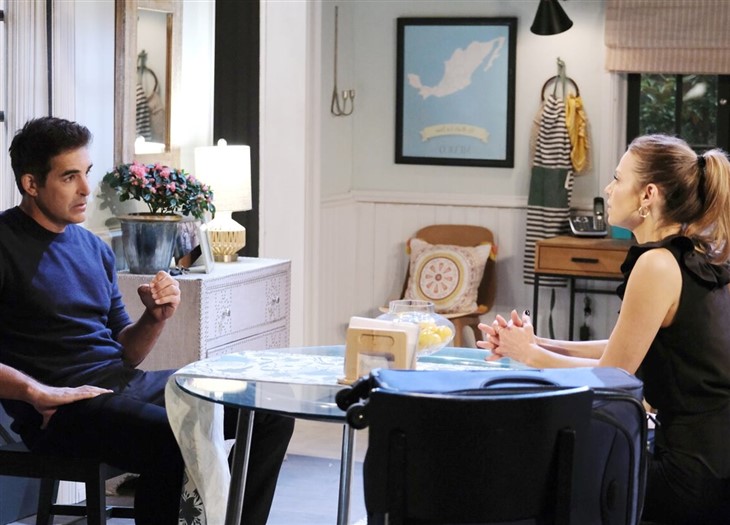 Days Of Our Lives spoilers for April 15, 2022, are out, revealing that the upcoming episode will see some trouble and scheming. For starters, Nicole will have a bad nightmare of a double shooting. Then, Rafe will get the evidence that might help him in arresting Ava.

Viewers will also see a double wedding drama in Salem while Sonny and Chad plot something against Leo. What will happen next? Keep reading to find out.

Starting off the episode, Nicole Walker will have the worst dream where Ava will be pulling a gun on her and Rafe. TV Season & Spoilers recently reported that Nicole will have a double shooting dream and will wake up in panic mode. Nicole knows what Ava is capable of, so she might be afraid of revenge.

Nevertheless, Walker will try to distract herself and go to the pub later for coffee, and she will find a familiar face and voice. DOOL spoilers reveal that Eric Brady will return to Salem. And longtime viewers know that Nicole and Eric share a history. So, Nicole will be happy to see him.

Moving forward in the episode, Gabi will give Rafe the evidence that she got from Hutchins against Ava. Furthermore, when Ava is busy flirting with Jake, Rafe will interrupt and arrest Ava. All of this will make Gabi feel like a winner, but her feelings might not remain the same.

The spoilers suggest that Ava will pitch an idea to Abigail, which will involve telling her Gwen’s truth. So, Abigail might ask Chad to do something and get Ava out of prison.

Later in the episode, Abigail will get to know that Gwen and Xander are getting involved in a double wedding with Craig and Leo. Even though Abigail hates Leo and won’t like her sister getting married to Leo, she might not say anything. More spoilers suggest that Xander will freak out after hearing that Leo is a part of the double wedding.

Gwen told Xander that her friend’s name is “Matty,” so he didn’t expect it to be Leo Stark. Longtime viewers know that Xander shares a weird history with Leo, so he might not be comfortable.

Regardless, Gwen will insist on a double wedding, and it will help the couple with wedding expenses, so Xander might agree. This double will surely create a lot of trouble in Salem. Sonny and Chad will also create issues for Leo in the coming week.

What will happen between Nicole and Eric? Only time will tell. It looks like many interesting storylines are in action. Until then, stay tuned. TV Season & Spoilers will keep you updated. Days Of Our Lives airs on NBC all weekdays. Don’t miss the action.