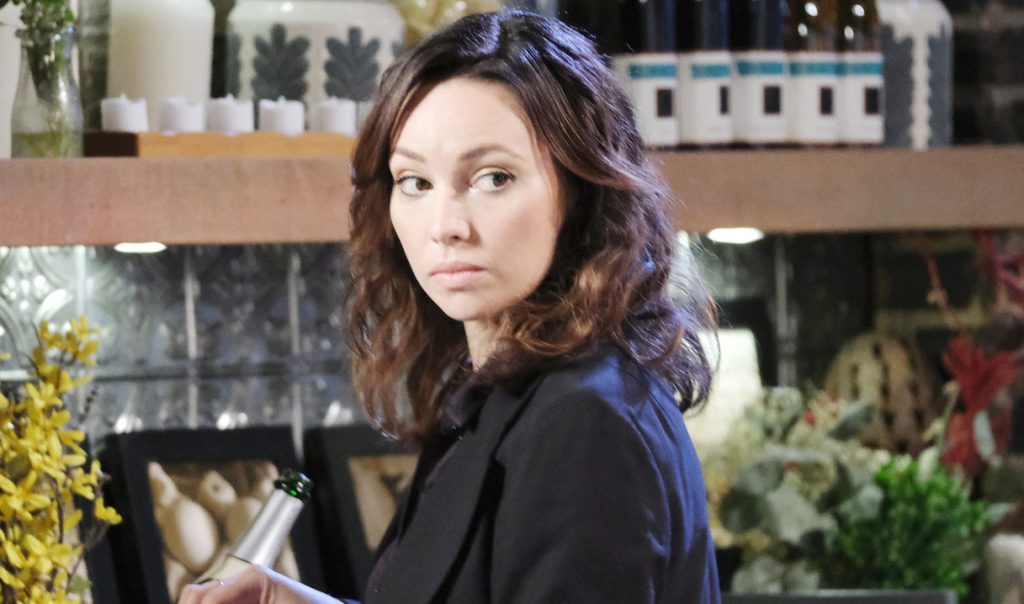 Days of Our Lives Spoilers for the Next Two Weeks (August 8-19, 2022) are out, and it reveals that there will be major revelations this week. In the week of August 8, 2022, Nicole will start obsessing over Eric and Jada’s date.

Then, Xander will also want answers, and he will make major moves for that. Dr. Rolf will be in a dilemma, and Days of Our Lives spoilers suggest that Leo will throw Gwen under the bus. Will the truth come out? We will have to wait to see.

Next, in the week of August 15-19, 2022, Alex and Gabi will have a tense first meeting, and Lucas will end up in prison. Anna will also get suspicious of Kristen, and she will follow her. Will she be able to bust Kristen’s secret? Here is all about it.

Days of Our Lives Spoilers For The Week Of August 8-12, 2022: Nicole Gets Obsessive?

Starting the week of August 8-12, 2022, Nicole will start obsessing over Eric. After Eric goes out on a date with Jada Hunter, Nicole starts getting jealous, and she will make Rafe worried.

Days of Our Lives spoilers suggest that Jada will bond with Shawn Brady because they are work partners, and after that, she will decide to check out a new place to live. As per the spoilers, Eric will decide to show Jada around, but Nicole will think that they are together.

Days of Our Lives spoilers suggest that Nicole will start getting jealous about it, and Rafe will sense that. This will leave him worried, and it might also cause troubles in his and Nicole’s relationship.

Xander Wants Answers, Will Do Anything About It

On the other end of the town, Xander will don the priest costume, and he will dig for information around Gwen. Days of Our Lives spoilers say that Xander and Sarah have a hunch that Gwen was at the DiMera mansion the night Abigail got murdered. So, Xander will decide to take things into his own hands.

He will don the priest costume and go to see the prison warden. While Xander will have enough information, he will still get some ideas. He will think of reaching out to Ava Vitali and hope she can fill the blanks. Both Sarah and Xander will be wondering what it would take for Ava to flip on Gwen.

Right now, Ava is distraught after Jake’s demise. She has started working on a plan with Gabi Hernandez and is helping with the whole share thing. So, she is still worried. Ava has officially moved into the DiMera mansion, and now EJ is going to keep a close eye on her too. All of this will push Ava close to the edge.

More Ava-related spoilers suggest that she will get close to someone else in the upcoming days. Johnny DiMera is heartbroken, and he will reach out to Ava. When that happens, the two of them will come closer. There will be a lot of awkwardness there afterward because they will get busted. So, some tense moments are coming up on the soap opera soon.

Dr. Rolf Is In A Dilemma

Elsewhere, Dr. Wilhelm Rolf will find himself under a lot of pressure when Kristen DiMera asks him to wake Stefan DiMera up. Stefan just underwent a heart transplant, and Dr. Rolf doesn’t think it is a nice idea. However, Kristen will force him.

Contrary to Kristen, Li Shin will want Dr. Rolf to delay this resurrection. Since Li is the person who paid for all of this, he will suggest that Dr. Rolf let Stefan sleep for a little longer. Although Stefan will wake up eventually, Li just wouldn’t want it to be now.

Everything Falls Apart For Leo

Days of Our Lives spoilers for the week of August 8-12, 2022, also reveal that everything will start falling apart for Leo. He will want a job at Basic Black, but Chloe and Brady won’t be on his side about that. Things will get worse for him when Thomas recognizes him as the tooth fairy. The Days of Our Lives spoilers say that Chad will come to know about it, and he will manhandle Leo after that. He will want answers. Will Leo tell him anything? We will know soon.

Speaking of answers, Clyde won’t be sitting ideal either. He will figure out that Leo was the man who came to him with the stolen jewels. So, Leo is about to get busted, but this won’t be the end. Further, Days of Our Lives spoilers suggest that Alex will get interested in another person in the town of Salem. This will be Chanel, and when Allie sees this, she will become territorial.

The Alex drama will continue in the week of August 15, 2022. Days of Our Lives spoilers suggest that Alex will meet with Gabi and push her buttons. He knows that she is famous for her conniving reputation. So, he will use that. Since Gabi isn’t someone who goes well with people, this first meet will also be rocky.

Further, the spoilers suggest that Leo will put Gwen in a troubling position when he throws her under the bus. He might speak about his suspicions about Gwen killing Abigail. Lucas is off the hook, and Sarah seems innocent too. So, Chad will take whatever he can. Further Lucas-related spoilers suggest that he will plead guilty to kidnapping Sami, and that means he will be headed to prison soon.

Elsewhere, Anna will feel that Kristen is hiding something, and she will want to know what it is. Kristen will try to conceal everything, but it looks like this is about Stefan surviving. Anna will follow the clues, and she might find the lab. Will she find out about Stefan? We will have to wait to know. Days of Our Lives airs on NBC all weekdays. Don’t miss the action.