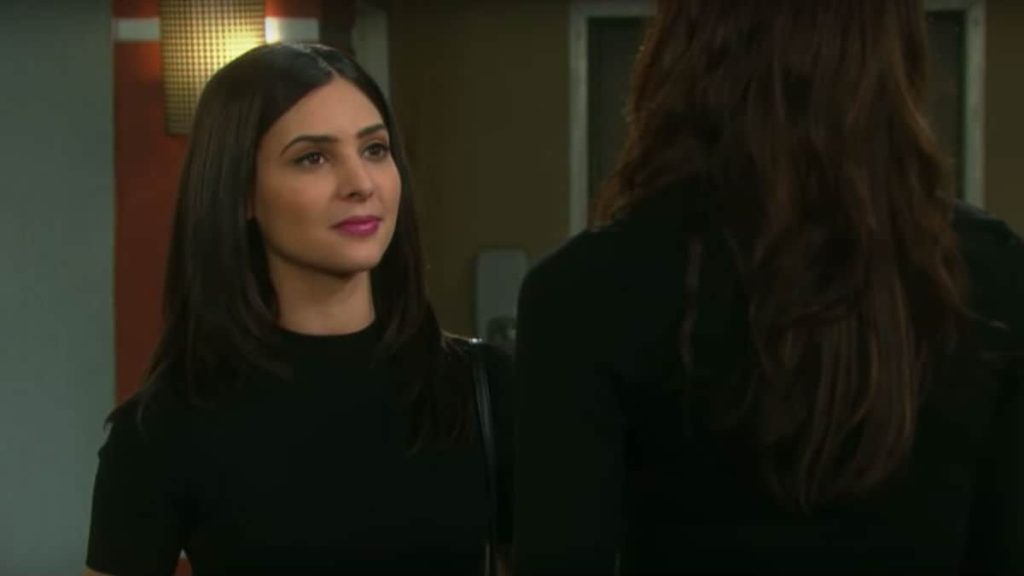 Days of Our Lives Two Weekly spoilers (October 11-22) reveal that viewers are in for some great drama. For the week of October 11-15, Gabi will confront Ava, and Rafe will threaten Philip. Rafe will tell Nicole about his jealousy, and John will try to talk Johnny out of the movie. Then Devil will take its full form, and Ciara-Ben will be in danger.

Further, in the week of October 18-22, Marlena will get really close to getting busted. Philip will reach out to Kate Roberts and ask for advice. Steve will get on a mission. Justin and Xander will work on their legal problems. Will they be able to sort everything out? Here is everything to know.

Days Of Our Lives Spoilers For The Week Of October 11-15: Gabi And Ava’s Confrontation

Starting off the week of October 11-15, Days of Our Lives spoilers suggest that Gabi will put up an act and convince Rafe that she wants to call a truce with Ava. Rafe will be really happy about it, and he will decide to leave these ladies alone. He will hope that they can make peace. However, as soon as Rafe leaves, these women will get to the business.

Gabi will rip into Ava, and she will accuse her of feeding Philip Kiriakis with all the information regarding Jake DiMera. Now, we don’t know if Ava will flat out confirm Gabi’s accusations or not, Days of Our Lives spoilers suggest that she will be glad that Gabi knows that Ava was behind it.

Spoilers also suggest that Ava will tell Gabi that she has cut a deal with Philip and is planning to turn Gabi Chic into Ava Chic. This will leave Gabi enraged. So, she will toss some threats and make it clear that this is just starting of a war.

More related spoilers suggest that Jake will go after Philip and threaten him. He will think that Philip trying to stir some mob trouble can get him into a really difficult position. But Philip won’t be scared of Jake, and he will act like Ava has got him covered. However, Jake will argue that Ava can turn onto Philip at any time. So, he better be careful.

Jealousy Is In The Air

Speaking of Philip, spoilers suggest that he won’t only be involved in stirring trouble for Jake and Gabi. In fact, the spoilers for the week of October 11, 2021, suggest that he will get really jealous when he finds Chloe Lane in Brady’s arms. It looks like Chloe will need a comforting hug, and Brady will be ready to give her that. But Philip will see them together, and he will be enraged. All he will be able to see is that Brady is holding Chloe.

DOOL viewers know this is a weak point for Philip. He cannot stand Brady and Chloe together. So, he will be fuming with jealousy.

More spoilers suggest that Rafe will sit down with Nicole and tell her about what he is feeling. He will tell her that he feels really jealous when he sees her with EJ DiMera. Later then, EJ and Nicole will have a hot make-out session, and that will make things hard for Rafe.

On the other end of the town, Days of Our Lives spoilers suggest that there will be more movie drama in the week of October 11, 2021. John Black will continue working to stop this film, but Johnny DiMera will gear up to take the next step. More movie-related spoilers suggest that Chad and Abigail will work on this movie together, and they will get closer to each other while they work together.

Days of Our Lives spoilers claim that while Abigail and Chad reconnect, EJ will have a deal for Johnny. He will hope that he can make some amends through this. Johnny will like it, and he will accept whatever EJ has to offer. However, Abigail and Chad will be shocked by it. It looks like EJ will convince Johnny into giving him a major role in the movie. So, Chad and Abigail will have to deal with that.

Days Of Our Lives Spoilers For The Week Of October 11-15: The Devil Takes Its Full Form

Other Days of Our Lives spoilers suggest that the devil will take its full form, and poor Marlena will be tormented. Spoilers suggest that the devil will change Ben’s mind about starting a family with Ciara Brady. It will convince him to go ahead with the baby plan. However, spoilers confirm that the devil wants to target Ciara and Ben’s baby. So, some hot plot is coming up there. Spoilers for the week of October 11, 2021, also suggest that the soap opera will revisit the iconic levitating scene this week. So, all the DOOL viewers, brace yourself to see Marlena as she floats about her bed. The demonic forces will become stronger than ever in John’s home. So, there is a possibility that he might get a hunch.

Days of Our Lives Spoilers For The Week Of October 18-22: Steve Goes Looking For Kristen

As we move into the week of October 18-22, this devil storyline will continue. Possessed Marlena will nearly get caught. Her eyes will be glowing when John approaches her. So, Marlena will have to turn away to avoid getting caught. However, the devil won’t be happy with this, and it will work really hard to make sure Marlena is under control.

On the other end, Philip will be worried about Chloe getting back with Brady Black. However, Philip is the one to be blamed here. He keeps self-sabotaging himself. Brady, on the other hand, seems to know what he is doing. He is always working to spend time with Chloe.

So, things will get tricky for Philip. He will confide in Kate Roberts about all of this. And she will point out Philip’s flaws and hope he understands. Celebdirtylaundry.com suggests that Philip will have to get the grip if he really wants Chloe.

Elsewhere, Steve Johnson will go looking for Kristen DiMera. Spoilers suggest that someone will hire Steve to track down Kristen. Who could it be? There is speculation that Victor might be behind all of this. He might be hoping for vengeance and insurance that Brady won’t go back to Kristen. So, he would rather lock Kristen himself.

Regardless, Steve will go looking for Kristen soon. More Victor-related spoilers suggest that Xander and Justin will need some legal help. So, Victor will work his best to get the Kiriakis men released from custody. He will go so far as to even bribe a judge.

Days of Our Lives spoilers also suggest that Justin and Xander

will have some other issues to tend to. Since they are behind bars, they will worry about their respective love interests. But, Victor won’t want to help either Gwen or Bonnie. Regardless, Xander and Justin will do everything they can to sort all the issues. It looks like the upcoming two weeks of Days of Our Lives will bring some very interesting episodes. So, make sure you tune in and enjoy. The soap opera airs on NBC all weekdays. Don’t miss the action.