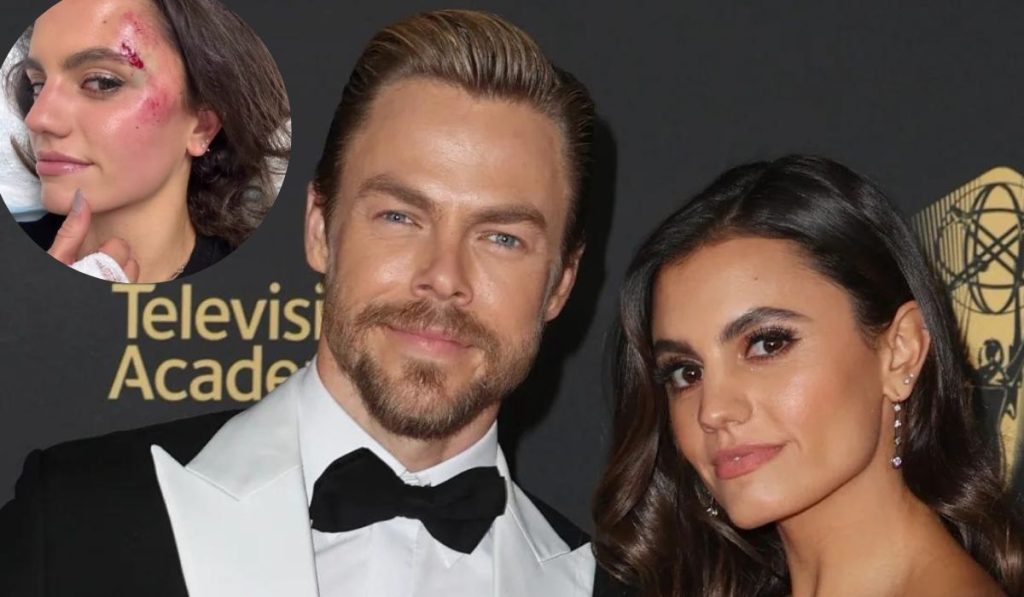 Long before they started dating, Derek Hough and Hayley Erbert wowed audiences with their on-stage connection. After dating for seven years, Derek and Hayley exchanged rings in June, and Michael Buble will perform at their forthcoming nuptials. However, the DWTS judges Derek Hough and Hayley Erbert recently experienced a scary incident. The Dancing with the Stars pair revealed the terrifying incident on Instagram after sadly losing their close friend Stephen “TWitch” Boss to suicide last month. The couple met with an accident on December 12 during their mountain trip. When the car carrying the couple skidded down an icy, steep hill, Erbert suffered severe facial injuries that needed stitches. Although, the couple recently give details about their accident and updated their fans about their health.

DWTS: Derek & Hayley Open Up About Their Car Accident

Derek Hough and Hayley Erbert uploaded a post on his Instagram Stories just after the incident, but he immediately removed it. The latter posted a picture of herself and her two dogs on December 18, 2022. The side of her head was wounded and bruised. She captioned the photo “healing cuddles,” and added a white heart emoji to the post. Erbert didn’t say anything much, which greatly worried supporters. The next day, the DWTS star gave her fans an update. She thanked everyone for helping them last night. Hayley told her fans that she met with an accident last night, but now she is completely fine.

Meanwhile, the Dancing With The Stars personality also said that she would soon explain everything in detail. However, on December 23, she shared a post on her Instagram narrating the whole incident. She shared a video clip from the night of her accident. Derek and Hayley’s visit to the ER, the damage to their vehicle, and Erbert’s receiving stitches in her forehead are all seen in the footage of the incident’s aftermath. In the caption, she wrote on December 12, she and her fiance, Derek, experienced a pretty scary ancient. They were traveling to the mountains when the unfortunate incident took place. Their accident involved a steep hill, icy roads, and also a tree. However, the worst of all of them was the fear that they would slide off the mountain.

Apart from this, she said she feels grateful as no other people were involved, and there was an immediate response from the paramedics. And lastly, they both are complete already. However, Hayley’s face is a little swollen, she got four stitches above her eyebrows and has difficulting walking. She also added that after their accident, they realized how fragile life is and how important people around you are. Wrapping the caption, she wished everyone a safe, healthy, and happy holiday season.

The DWTS judges will walk through the aisle soon. Derek Hough, a judge on DWTS, revealed information about his forthcoming marriage to Hayley Erbert. After dating since 2015, Derek and Hayley got engaged in June 2022. Their favorite location, their house, is where he made his proposal. Derek holds the record for the most victories, with six on the DWTS. Whereas, Erbert competed in So You Think You Can Dance Season 10 as one of the top three girls. Later, she placed in the top six of the competition. When Hayley was chosen to join the Hough siblings on tour as a professional dancer in 2014, Derek and Hayley first got to know one another. In Season 21, she joined the cast of DWTS, and she and Derek started dating. After seven years together, the pair is now preparing to get married as soon as possible.

Derek stated that he and Hayley hope to marry “within the year” in an interview with Parade. Approximately 160 individuals would be on the guest list, he said, adding that about 155 of them are all her nieces and nephews.  Derek said, “I have a huge family”. One of Derek’s family members is Julianne, a professional dancer and former cast member of DWTS. Derek wants to work with Hayley to prepare the color schemes, floral arrangements, and music for the event. He stated, “I will surely want to be involved since I am a choreographer, a creative, and with anything I do with production”. Stay tuned to TV Season & Spoilers for more updates.