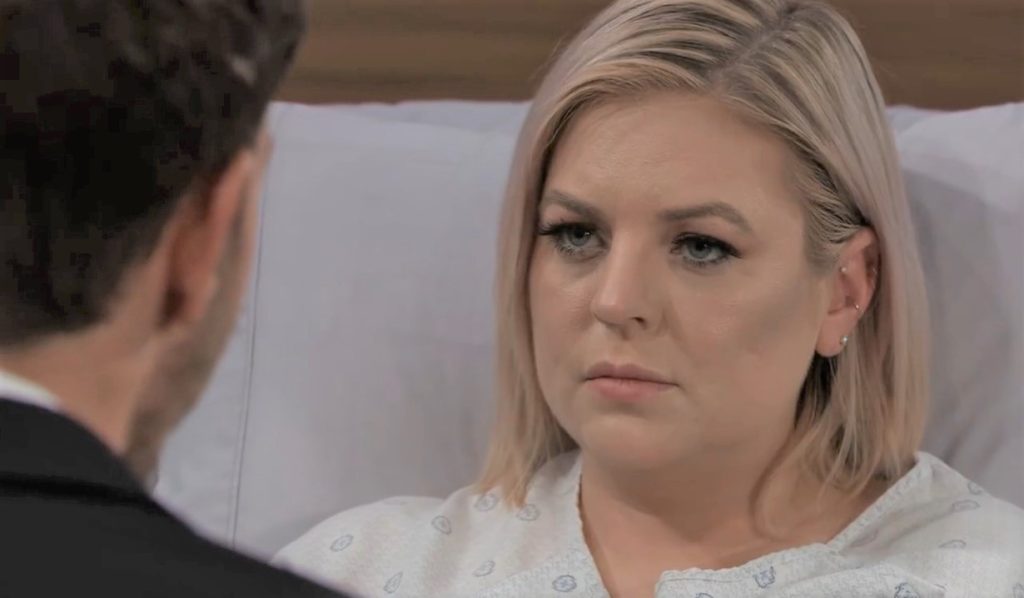 General Hospital Preview & Spoilers For The Week Of June 1 Out! Maxie Gives Baby Lou Away

General Hospital preview for the upcoming week, the week of June 1, is out, and it reveals that viewers are in for a rather emotional week. This will be the time when Maxie will give Baby Lou to Brook, and that will be a very emotional moment. Then, viewers might finally come to know the truth about Peter’s fall.

General Hospital has been teasing that for a very long time now. This week will bring the answers. The preview video also reveals that Portia and Trina will be in danger, while Laura and Cyrus will have an emotional moment. How will all of this rollout? Keep reading to know-

The promo for the week of June 1 reveals that Maxie and BLQ will take their plan to the next level in the upcoming days. The promo starts with Maxie telling Brook that she has a wild story to tell her. So, first, Maxie will tell Brook about everything that happened to her, including “Chloe Jennings” and how she ended up giving birth to baby Lou in the woods. After this is done, the two ladies will embrace themselves for the next part of their plan.

Later on in the video, viewers can see Maxie kneeling down on her hands and sobbing uncontrollably. It looks like she might have given Baby Lou to Brook, and this separation might have been very difficult for her. While Maxie knows that this is the only way to keep her child safe, the idea of being away from her for a long time might be unbearable to Maxie.

General Hospital: Will Peter Be Okay?

It looks like Peter’s plan to fly away with Maxie and Baby Lou to start a new life somewhere else will be in limbo. General Hospital is focusing a lot on Peter’s fall from the stairs and lay there unconscious. So, the escaping plan will not pan out. However, the question is, who might have pushed Peter?

At this point, Hamilton Finn seems like the answer to that question. Spoilers suggest that Finn and Peter will have an ultimate confrontation earlier the day of the fall. So, it is possible that Finn’s emotions might take the best of him, and he will push Peter down.

Liz Has To Take Actions

Spoilers confirm that Liz will find Peter unconscious after the fall, and she will check his pulse. However, it is yet to be seen what Liz will do next. Would she help him get the medical assistance or leave him there to die? We will know about that soon. Either way, we know that Peter will be in bad shape.

General Hospital: Portia and Trina Are In Danger

On the other end of the town, viewers will get to see some serious drama. Viewers know that Cyrus had ended up in Portia’s place, threatening her to treat him. The upcoming episodes will continue that drama. In the preview video, we can hear someone screaming. In the meantime, viewers get to see Curtis, Jordan, and Marcus as they gather outside Trina’s house. Laura, along with Kevin, will also be there accompanied by an officer. It looks like Cyrus will threaten both Portia and Trina. So, this will be a delicate situation.

General Hospital spoilers reveal that Laura will end up talking to Cyrus, trying to bring him to his senses. The two siblings will have a rather emotional moment. This could be a breakthrough for both of them. However, more spoilers reveal that Laura’s life might be in danger too. So, she must not forget that even if she and Cyrus are having a personal moment, he is armed.

We will have to see how things roll out in Port Charles. What we do know is that everything will be really dramatic. Make sure you tune in and enjoy all the episodes that are coming up. General Hospital airs on ABC all weekdays. So, stay tuned.