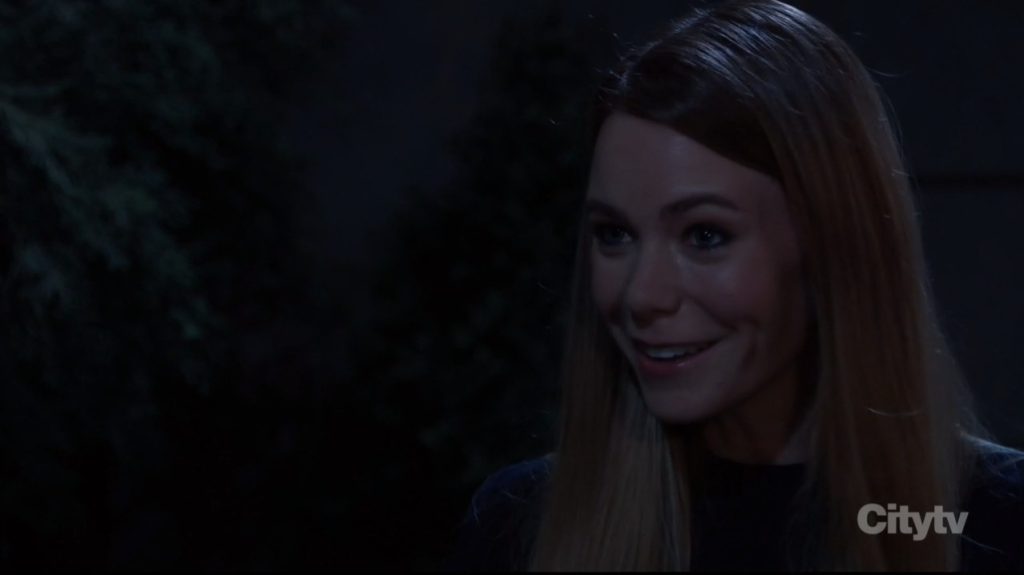 General Hospital recap for Tuesday, September 6, 2022, revealed the story of Willow and Nina. First, Willow had a bad dream where Michael and Carly were dead. Nelle appeared in the dream and accused Willow of ending her family. A startled Willow and Carly left for Nelle’s grave. They wanted to see Nelle but GH had another plan. At the graveyard, Nina was already there talking to Nelle’s vision as this mother-daughter reconciled.

Nina and Willow argued at the graveyard. Carly interrupted them and scolded Nina. Meanwhile, Trina demanded to know what was in the letter addressed to her. Spencer confessed he wanted to be more honest with Esme, so things were different. Trina gave his letter back, and Spencer left.

Willow Gets A Nightmare

In this episode of General Hospital, Willow saw a terrifying nightmare in which Michael and Carly were dead, lying on the floor. Nelle appeared in the dream and accused Willow. In her dream, Willow looked at the blood on her hands in shock. Nelle urged Wiley to say goodbye to Willow, and they disappeared. Willow woke up in sweats but was grateful to see Michael and Carly alive. Wiley was sleeping in the other room.

Willow told everyone about her dream and decided to step out for fresh air. Carly mentioned it was Nelle’s second death anniversary. Wiley also had a bad dream and wanted to be with Michael. So, Carly offered to take Willow out.

Speaking of Nina, she visited Nelle’s grave and saw a vision of Nelle lamenting her past. Nelle wanted to be with her mother and was sorry she could not be. Nina and Nelle shared a hug and assured each other. Nelle thought they were the same people, and thus, they caused pain to others. Furthermore, Nelle confessed they would have been dangerous for the world had Nina not stopped them.

Nelle lamented that Nina had opportunities to know she was her daughter; Nina held Nelle’s face and cried. Willow arrived and wondered what was going on. Nina told her she was only talking to herself. Willow expressed sympathy, but Nina wanted Willow to remove Nelle from Wiley’s life. They argued, and Carly arrived to stop them.

Willow left, and Carly accused Nina of playing the victim card, just like Nelle. Moreover, Carly felt compassion for Nelle before. However, now she could see all the harm Nelle had done. Carly accused Nina of feeling proud of all the wrong Nelle did. She stormed off, leaving Nina in shambles.

Meanwhile, in this episode of General Hospital, Trina wanted to know what was in the letter. She was curious because Spencer’s letter had her name written on it. Spencer confessed it was about their friendship, and now, he did not want her to read it because they were not friends anymore.

Trina wanted Spencer to understand her perspective. Spencer assured her and wanted to be more honest. Furthermore, Spencer regretted the past and felt things could have been different. He claimed this was what he wrote in the letter. Trina gave the letter back and let Spencer leave. General Hospital airs weekdays on ABC. Stay tuned with TV Season & Spoilers for the latest news and spoilers.