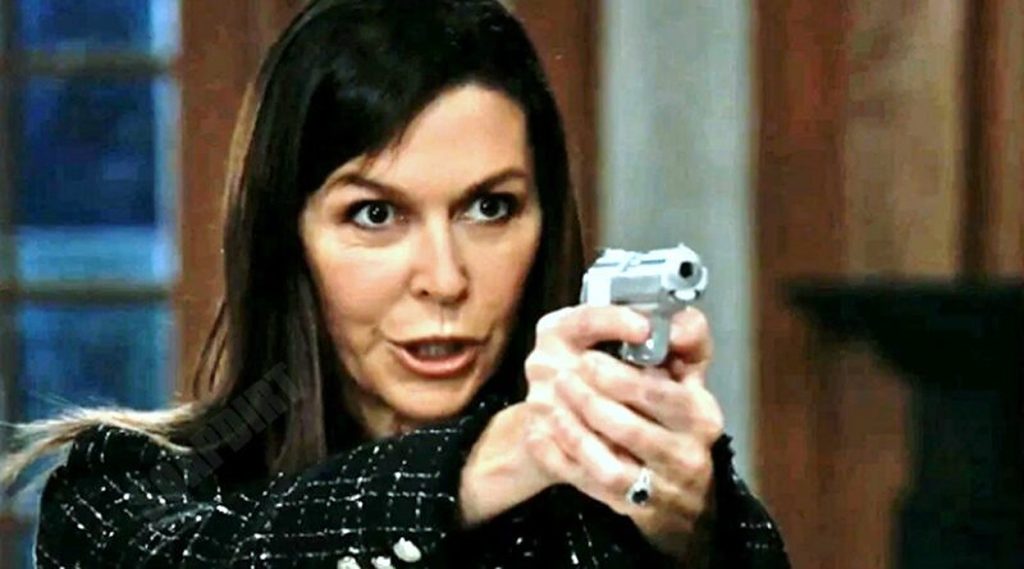 General Hospital has its fair share of twins in town! And when it comes to soap operas, it’s quite a given that at least one twin has to be the devil incarnate! We have seen it with Nelle and Willow! And the other pair is Anna and Alex! Both are played by actress Finola Hughes. However, it’s been quite a while since we had the chance to see her on-screen.

Of course owing to the fact that she has been presumed dead ever since her fight with her good twin! But history stands proof no one presumed dead is ever REALLY dead! So maybe it’s time for the evil twin Alex to reveal herself as alive. Moreover, we think when she does reveal herself, she will be holding the DEADLY HOOK! And holding her other hand could be Evil Genius Victor Cassadine!

General Hospital: Death, Vengeance, And Beyond!

Last we saw She-Devil Alex on General Hospital was on board Haunted Star. Where she was seen fighting it out with her twin sister Anna. Towards the end of the high voltage shoot-out, Alex fell off the board into the high current waters. Or, she actually threw herself. When she did not re-surface, Alex was presumed dead. However, we know if there is no dead body, there is no death! After all, we just saw Esme return from the waters, didn’t we? So there is a high probability that Alex is well and alive and is just biding her time in wait of the perfect moment to bounce back!

Or perhaps, she has already returned! Yielding a hook, more so! With every passing episode, the likeliness of Esme being the Hook Killer is reducing. This puts us to ponder if this She-Devil could be the murderous hand behind it all! She sure has many axes to grind on General Hospital. Especially with her sister, Anna! We know that Anna had given up Alex’s son Peter up for adoption. Later, because of Valentin, Peter ended up with his evil father, Ceaser. None of it sat well with Alex, of course, and she tried to kill Anna over it once already. So we say Alex is looking pretty good as a suspect right now!

Alex Partnering Up With Victor!

On General Hospital, She-devil Alex and Devil Incarnate himself- Victor, both have a shady past. They both were involved with WSB and DVX! Hence, there is a fair chance that they’ve known each other from back in the day. Moreover, they both have the same target at the moment! Anna! Victor wants to get rid of the super spy as she all up in his business and Alex wants to avenge herself by eliminating Anna altogether. So it is not that farfetched of a thought to believe the two have joined forces to eliminate a common enemy. Poor Lucy too may have fallen prey to these same games. Alex may have taken her out on Victor’s behest.

We know that Victor recently set up social media posts originating from Europe to make it look like that’s where Esme is! So there is a fair chance Alex, too, is trying to pin her kills on the teen-devil Esme. After all, except the age, they do have similar physical attributes. So behind the cloak, it could be either of them, and no one would tell the difference!

Going by the theme of events, we must gear up to witness a big reveal, where Victor and Alex may come forth as the REAL culprits behind the tragic and malicious Hook Killings! What do you think? Are you on board with this idea? Or do you still think it is Esme behind the cloak? Please share your views in the comments! Meanwhile, stay tuned to ABC over weekdays to catchup with all the high voltage drama of General Hospital.