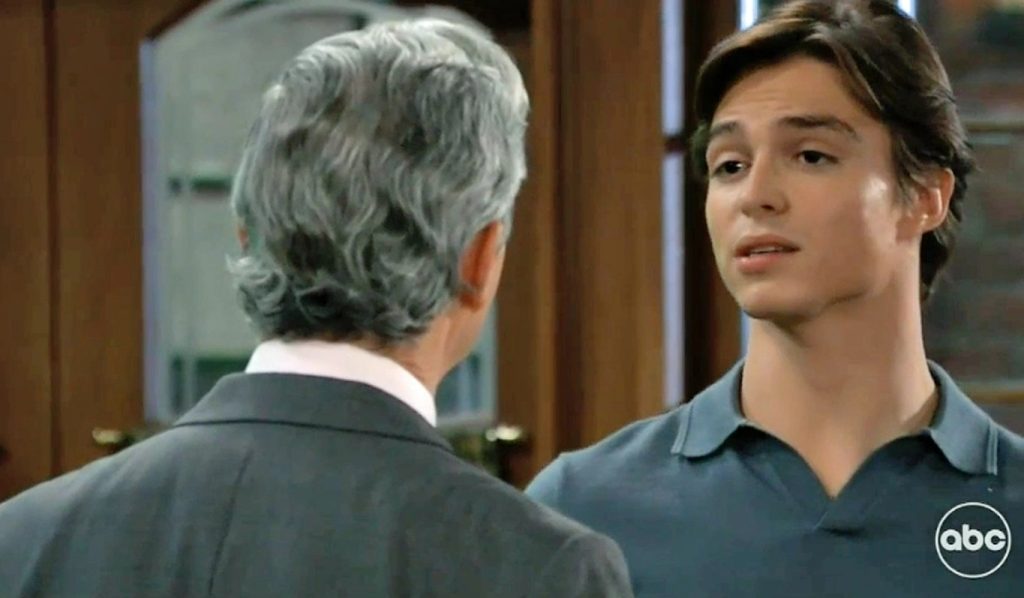 General Hospital spoilers for August 29, 2022, reveal that Sonny will get tired of his family. He will be furious with his family for treating Nina badly. In the meantime, Josslyn will find an injured Ava. Looks like a mysterious person will attack Ava with a hook. As a result, Victor may suspect Spencer and will push him to answer. Meanwhile, Elizabeth will have a missing memory. She will wonder if she injured Ava by mistake. Continue to read further, and let’s see what is brewing in Port Charles.

After getting to know about Nikolas and Esme, Spencer will feel very disgusted. As a result, he will get intoxicated. General Hospital spoilers for Monday claim that Finn will worry about Spencer and will advise him. Having been away from his own father for years, Finn will not want Spencer to follow his paths. He will warn Spencer that his decision to disown his father will bring regret later in the future.

Elsewhere, Mac and Felicia will discuss the possibility of him being the biological father of Cody. Mac will feel that this might be an option considering his past. Speaking of Cody, he will try to kiss Britt. However, Britt will pull back, not wanting the kiss him.

As a result, Cody will get frustrated. He will wonder why Britt is so irritating at times. Just for a kiss, she is overreacting. As for Britt, she knows that Cody has something going on in his mind. He constantly enquires Britt about her father, Caser.

General Hospital Spoilers: Ava Is Attacked With A Hook

Friday’s cliffhanger was Ava being chased by someone with a hook. On Monday, Josslyn will threaten Nina to throw her out of the Quartermaine’s property. Later, she will stumble upon an injured Ava. The mysterious person will attack Ava. Josslyn will be shocked and scared to find Ava in that state. However, Ava will ask her not to leave her side. Then, Joss will call 911, and Ava will be rushed to the hospital.

This incident will put everyone in shock. As for Victor, he will confront Spencer, thinking he might have attacked her out of anger. On the contrary, Spencer will think the same for Victor. Either way, Spencer’s current state of drunkenness will put him in more trouble.

Elsewhere, after having a heated argument, Liz will run away from the house. Later, she will wake up with an injury on her head. Not just that, she will also have missing memory. Nikolas will be there to help her by providing comfort. Once she learns about Ava’s attack, she will wonder if she is the one who did it. Earlier also, she mistakenly injured Harrison. However, General Hospital spoilers tease that it will not be Liz’s fault this time. Then who was it? We will know it.

Sonny Is Done With His Family; Austin Suspects Mason

Further on General Hospital, Sonny will lash out at his family for treating Nina poorly. Later, he will cross paths with Anna. She will notice that Sonny is not in a good mood. Hence, she will ask Sonny to open up and share his thoughts. In the meanwhile, Sonny will appreciate Anna’s efforts. He will like that someone is ready to listen to his ordeals.

Next, Austin will grill Mason with questions regarding Ava. According to Mason, he will feel that Mason might have attacked Ava. Whatever it is, it looks like Ava is swinging in a life-or-death situation in the hospital. Stay tuned and watch General Hospital, it airs every Weekdays on ABC. For more spoilers, visit our website, TV Season & Spoilers.