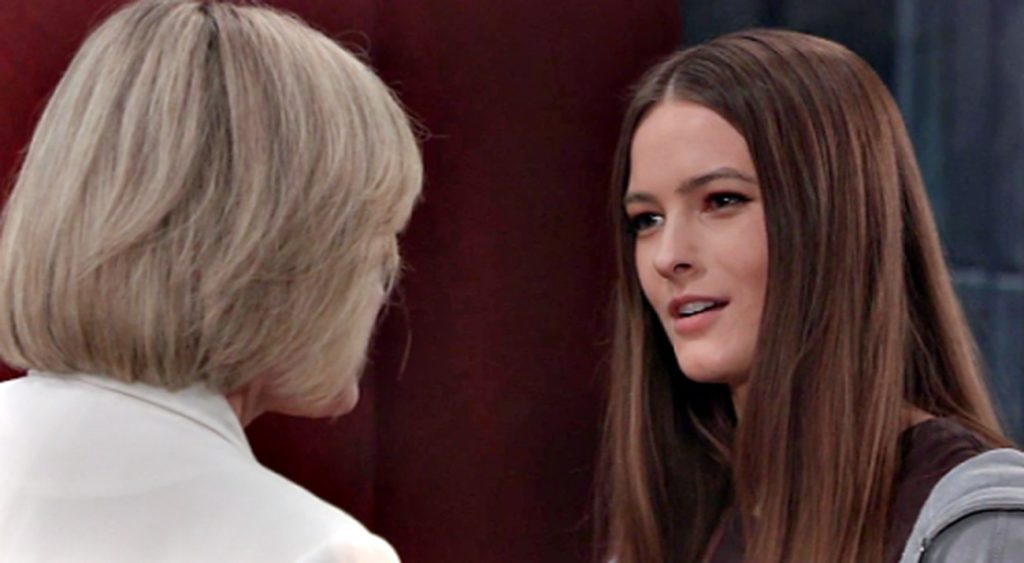 General Hospital spoilers for the week of October 17-21, 2022, tease that Holly Sutton will return to Port Charles. She will have many things to tackle before she makes some shocking revelation. At Wyndemere, Esme and Ava will have a fall-out when Ava discovers the baby update. Ava couldn’t accept Nikolas’ cheating affair, and this baby is just going to push her over the edge. Over with Sasha, she will also have to face a legal battle. Now that Brando is dead, what do GH writers have in store for Sasha? Let’s continue to read and find out what unfolds in next week’s episode.

Previously General Hospital viewers saw how Lucy was in trouble when Johann wouldn’t let her leave Victor’s room. Now, General Hospital spoilers for the week of October 17, 2022, tease that Anna and Valentin will have to face more troubles with Victor when Valentin lands in a tight spot. So, Anna will have to take care of both the situations, one with Lucy and another with Valentin.

At the city council, Carly will deliver a passionate speech to protect the cemetery. Drew will be so proud of her that he will plan something special for her. Looks like Drew and Carly will spend some time having a deep conversation before they hit the sheets.

At Pentonville, Cyrus will approach Spencer again. He might have an offer for him. So, if Spencer lands in hot water, he might get tempted to take Cyrus’ deal. What might Cyrus want from Spencer? We will know soon. Further, General Hospital spoilers suggest that Ned will feel betrayed and confront Michael regarding Valentin’s plan. Whatever the case, both Ned and Michael will get into a heated argument.

At Wyndemere, Esme will land in a tough spot but will soon find some relief. But that relief mightnot last very long because GH spoilers say someone unexpected will come just right in time to mess things up. Spoilers say that Ava will corner Nikolas for answers, so she may find out that Esme is back in town that, too, with a baby bump. Listening to this, Ava will lose her composure and will wonder how Nikolas let that happen and how he can be so irresponsible. Later, Ava will rip into Esme regarding the same.

Over with Sasha, she will have to face a major issue. She will have to deal with some legal drama. Now that Brando is dead, who will take her guardianship? Looks like Sasha will have to fret over her future, whether she will land in rehab or in prison.

Elsewhere, Victor will quiz Trina regarding something. Victor has noticed that the hook killer’s targets are somewhere related to Trina. So, he will ask her about the same. Across the town, Brook Lynn will land in trouble when “The Hook” stands in front of her with a sharp object. Brook’s past traumatic memory will come rushing into her mind. Years back, Nelle attacked Brook and slit her throat open, so she will remember that.

At the hospital, Robert will come to meet Diane in the hope that she might have some fresh clues regarding the killer. However, he might not get much info. In fact, spoilers hint that Robert would be in for a bigger shock in the upcoming episodes. General Hospital spoilers for the week of October 17, 2022, say that Holly Sutton will be back in town and leave everyone shocked, especially her former flame, Robert. However, Holly will have to tackle some issues before revealing some shocking information.

Back with Victor, he will feel that he has achieved something big. Chances are there that before letting Holly escape, Victor might have done some programming in her mind. Next week, Holly will find herself in major trouble and be shocked at what she has done. Is this a sign that Holly might be the hook killer? And only now is she realizing it because of Victor’s programming? We will know that real soon. Until then, watch General Hospital, which airs every weekday on ABC. For more updates and spoilers, visit our website, TV Season & Spoilers.