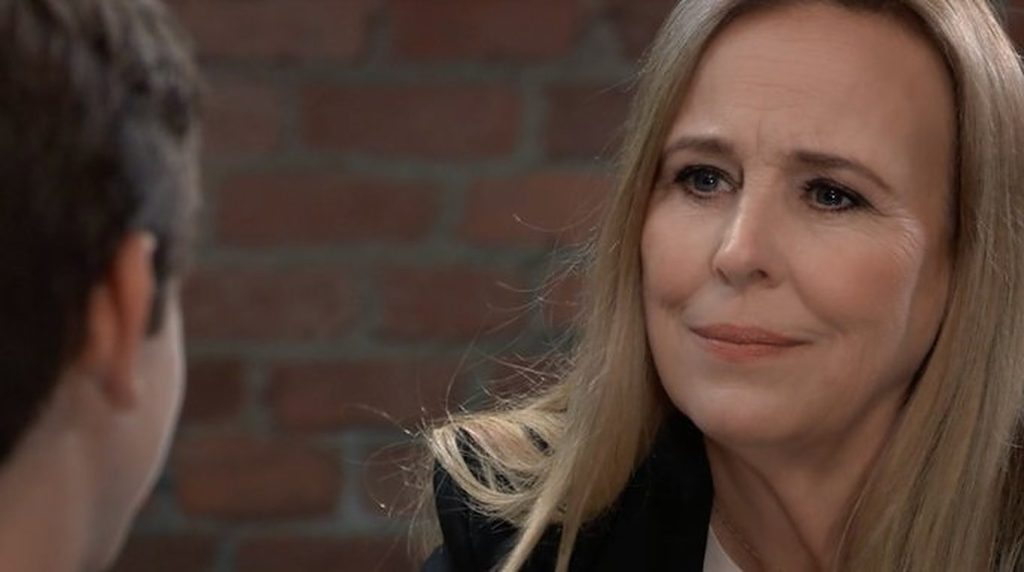 General Hospital spoilers for Wednesday, April 20, 2022, suggest that Laura will talk to Ava about the whole Jennifer situation. Meanwhile, Cam demands Spencer to tell Trina and Joss the truth. All of this will end up in a furious battle.

Esme will reach out to Nikolas to discuss something. Then, Sonny will be in the mood for revenge. Harmony might reveal the truth to Alexis. Sam fails to score the evidence against Esme. What would she do? Here is everything to know about it.

Laura Reaches Out To Ava

General Hospital spoilers for Wednesday, April 20, 2022, suggest that Laura will speak to someone about her growing suspicions. In Wednesday’s preview video, she says, “you are suspect number one,” to someone.

Laura will also speak to Ava after this. It is likely that she will try to find information about what Victor is up to. Since Ava is in the prime position to give her that, she will reach out to her.

Ava will admit that she suspects that Victor is behind Jennifer’s case. Laura also doesn’t think that Trina could leak such a scandalous video. She will agree with Ava regarding Esme’s guilt and think justice should be served.

Elsewhere, Officer Rory Cabrera will witness something that will lead to double arrest. Cameron will demand Spencer open up about his plot to take Esme down. But Spencer doesn’t want to reveal his plan in front of Trina or Josslyn.

So, Spencer will keep quiet about this whole thing. However, Cameron will not like it and end up punching Spencer. Unfortunately, Rory will see this incident and take them into custody.

Esme is concerned that Nikolas has changed his mind. She’s hoping to take Nikolas on her side, but it looks like Nikolas is treating Esme just like Spencer. However, he will assure Esme and tell her that he is still by her side. He will also give a pep talk to Esme.

Over with Nina, she will meet with Ava and deliver some updates and a warning. Nina will tell her about the robbery at Charlie’s Pub, which is somehow connected to the mob dram. But Ava is aware of this thanks to Sonny’s connection with Avery. Nina will still ask Ava to stay alert.

Speaking of Sonny, he’ll talk to someone about a closed case. It looks like Sonny will plot a deadly mob move in order to regain his power. In General Hospital’s weekly promo, Sonny lets out an evil laugh in front of a person tied up in a car trunk. Either the person is one of the robbers or someone high position in the organization. Now Sonny will connect the dots and take matters into his hand to prove it’s deadly to mess up with him.

On the other end of Port Charles, Alexis will wonder what’s wrong with drunk Harmony after she canceled Alexis’ order. Alexis will suspect that something is wrong with her, and she will push her to speak up. Since Harmony is tipsy, there’s a chance that she might tell the truth behind the purse and incriminating file.

Harmony will eventually leave the place, and Alexis will follow her

. There will be stressful moments when Carly shows up and wonder whether things are alright. So Alexis will reveal she was taking Harmony home.

Once they reach home, Alexis asks Harmony to spill the truth. Harmony will urge that she feels terrified. But Alexis will continue to question what made her terrified. Harmony could be on the verge of spilling the saddening truth about Brendon’s story. But before revealing the truth, she will change her mind and come up with a cover story.

Rounding off, Carly will apologize to Sam for creating a mess between her and Dante. But Sam will take the responsibility because she decided to sneak into his cell phone. Now that the damage is done, Carly will quiz Sam whether she found something that could help them take Esme down.

Sam may accept that she tried to get the details, but there’s nothing that could reveal Esme is guilty. Stay tuned. TV Season & Spoilers will keep you updated. General Hospital airs all weekdays only on ABC.