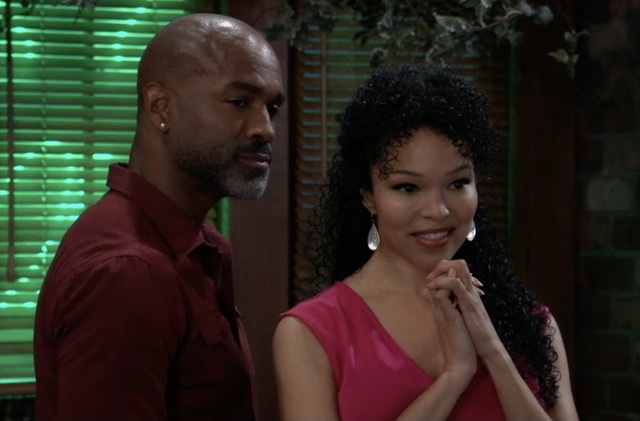 General Hospital Spoilers: Portia And Curtis Come Closer! Is It The Start Of Their Romance?

General Hospital viewers who have been keeping up with the show know that Portia and Curtis have been coming very close lately. In fact, many General Hospital viewers have been even speculating that the two of them would get involved in a romantic relationship quite soon. And it looks like all of those speculations will be true. The latest spoilers suggest that in the upcoming days, both of them will make some major development in their relationship. It looks like the spark will finally become a fire. What would happen there? Here is everything you need to know-

Portia And Curtis Are Coming Closer

The recent General Hospital episodes have seen a number of developments in Curtis and Portia’s storyline. The two of them had been coming closer for a long time now. However, it was now, in the recent episodes, when Portia decided to make a move. Viewers would know that recently Portia went to see Curtis in his new bar, and the two were having an intimate moment where Portia kissed Curtis. However, Curtis felt blindsided and unprepared for that, and hence he did not reciprocate. So, Portia left the club hurriedly, as she felt embarrassed. However, now in the upcoming episodes, things might change.

General Hospital: Curtis Finds Out Portia Is In Danger

After Portia kissed Curtis, he fell in a tough spot. He didn’t quite know how to react. But thanks to Laura, he was able to find a way. In the General Hospital episode that aired this June 1, Curtis spoke to Laura, where she pointed out that what happened was okay. Later then, Curtis called Portia to apologize. However, when he called her, all he could really hear were some whispers as Cyrus had taken not only Portia but also Trina hostage. It looks like Curtis will sense that something is wrong there, and he might take action.

What Will Curtis Do?

Once Curtis gets a sense that something might be wrong with Portia, it doesn’t look like he will stay calm. In fact, the latest General Hospital spoilers reveal that Curtis will straight away call Jordan, and she, along with the team of cops and Curtis, will reach Portia’s house. Not just them, Laura and Michael will also reach there. They will all find out that Cyrus has taken Portia and Trina hostage.

This might be the moment where Curtis would realize that if he hadn’t reached there on time, he might have lost Portia. That thought might also be the push Curtis needs to give in to this relationship. So, the latest General Hospital spoilers reveal that it is possible that viewers might get to see Portia and Curtis getting passionate in the upcoming days. This would also mean the beginning of their romance.

Curtis and Portia do have great chemistry, and it would be really interesting if the two of them came together. This would start a series of interesting events. We will have to wait to see what happens at General Hospital. So, make sure you tune in and enjoy. General Hospital is indeed bringing some fun storylines. Don’t miss out.