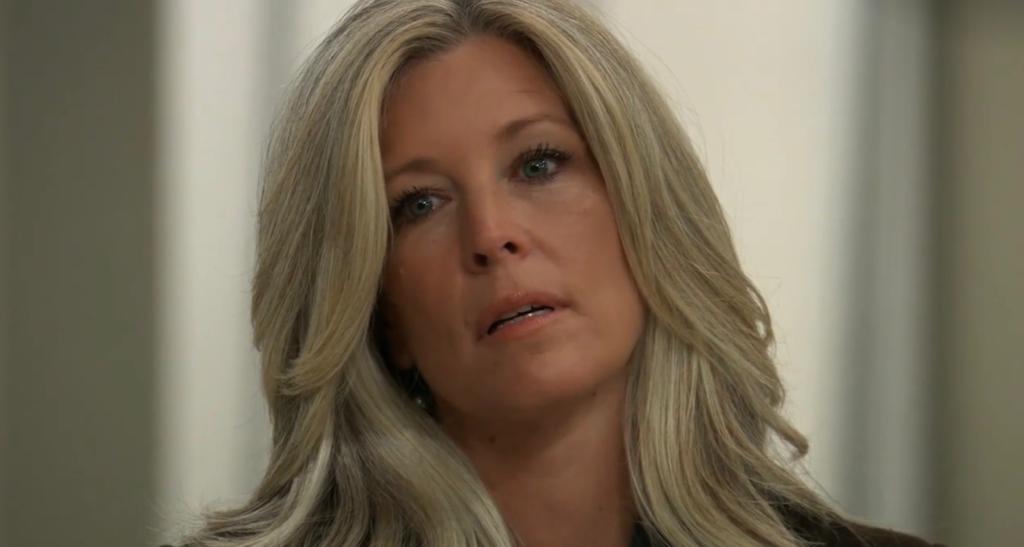 General Hospital Two Weekly Spoilers are out, and it reveals that the upcoming weeks will be full of interesting storylines, twists, and turns. In the week of January 31, 2022, Sonny will make some grand gestures while Liz will get suspicious. There will be a lot of teenage drama in the upcoming days, and Ned-Olivia will renew their wedding vows.

While GH viewers might feel that this is a good thing, spoilers suggest that things won’t be as good. Some unexpected guests will show up and cause havoc. Not only that, Peter will be on his way back to prison. But will he really be shifted? It looks less likely. So, all of this will cause Maxie and everyone in Port Charles to freak out.

As we move into the week of February 7-14, 2022, there will be some hospital emergencies, and that will keep many characters on edge. Then, Sonny will meet up with a friend and ask for advice. He will also do something that will end with Carly making a decision. Would she decide to get a divorce, or is she finally ready to give Sonny another chance? Here is all about it.

Starting off, the week of January 31, 2022, will be Sonny, who will be stuck with the idea of a grand gesture. While Ned will try to talk him out of it, Sonny will not listen. Ned believes that the idea of a grand gesture isn’t something that Sonny should go ahead with because Carly clearly asked for some time alone. He will worry that all of this will only cause more issues for Sonny in the upcoming days. However, Sony might not listen to any of it and go ahead with the plan anyway.

General Hospital spoilers also reveal that Sonny won’t be the only one making gestures. His son Michael will also surprise his girlfriend Willow with a romantic gesture. He will hope that the two of them can go to Paris for a getaway. Things haven’t been very easy for Willow and Michael lately. So, he will hope they could take some time off.

Over at GH, strange things will happen, and it will leave Elizabeth worried. General Hospital spoilers claim that viewers will get to see Liz as she sits in the art room reflecting on something. She will feel that someone is trying to destroy Franco’s Legacy, and she won’t like it. She will think about all of this and everything that has happened in the past few days. After giving it a lot of thought, Liz will reach out to Finn, and they will discuss it.

General Hospital spoilers for the week of January 31, 2022, confirm that viewers will get to see a lot of teenage drama in the upcoming week. Esme will continue to play the victim after the whole cabin drama. However, the truth is that she only planned the trip to blow up Spencer’s friendships. While Spencer does not know everything, he has understood that trusting Esme is not wise.

Tv Season & Spoilers suggest that Spencer will not trust Esme anymore, but he will pretend to reconcile. Spencer will think that it is important for him to do so to protect himself and his friends. After that, he will meet with everyone one last time at Kelly’s before he leaves for his time at Spring Ridge. Knowing how smart and sneaky Esme is, it is likely that she will understand that Spencer isn’t being truthful.

More teen-related spoilers suggest that Trina and Jocelyn will also have a tough conversation. Josslyn will ask Trina if she really meant what she had said during the cabin getaway. Trina will most probably blame everything on the alcohol, but Josslyn will feel that it is what Trina actually feels.

Josslyn might feel like she needs to strike a balance between Cameron and Trina. She will talk to Trina about all of this, but Trina will feel that their happy days together are over. She might point out that those are now the good old days. After her conversation with Josslyn, Trina will head to the gallery, where Ava will ask her everything about the trip. Trina will fill Ava with all the updates.

On the other end of the town, there will be some romance in the air because Ned and Olivia will renew their wedding vows. They will decide that they are ready to move on from the whole Alexis slip and give the relationship a fresh start. However, things won’t be all smooth because some unexpected guests will show up.

Tracy Quartermaine will be worried when Luke’s past comes right in front of her. We will have to see how all of this ends. More related spoilers claim that Brooke and Chase will also talk to each other about their relationship after this whole wedding vow renewal ceremony. Would the two of them decide to actually give romance a try? We will have to wait to know.

General Hospital Spoilers For The Week Of January 31- February 4, 2022: Maxie And Austin Process A Shocker

Speaking of romance, General Hospital spoilers suggest that Sonny will sit with Carly and try to talk to her. He will hope that they can work on their fractured marriage. However, it doesn’t look like things will get any better at the moment. While Sony struggles, his daughter Kristina will provide him with some support.

But, Sonny and Carly won’t be the only couple thinking about the future. General Hospital spoilers suggest Maxie and Austin will think about their kiss in Pautauk and wonder what it means for both of them. They will have to think this thing through.

More Maxie-related spoilers claim that her ex Peter will be transferred to prison in the coming week. However, it doesn’t look like that will happen because Victor Cassadine might derail the plan. All of this could leave Mac Scorpio severely injured. So, we will have to see where General Hospital takes this storyline.

General Hospital Spoilers For The Week Of February 7-11, 2022: Hospital Emergencies Coming Up

The week of February 7, 2022, will start off on a rather tense note. Tv Season & Spoilers suggest that there will be more than one medical emergency that week. One of them will be Carly related because the spoiler suggests that she will rush to the hospital. Carly won’t be the only one tensed because the spoiler suggests that Nina will be fearful too.

This could easily have something to do either with Wiley, or it could also be something about Sony. Since we know that Sony is off his lithium, it is possible that his bipolar disease might have started acting out.

In another emergency, Maxie and Felicia will be waiting anxiously for some news. It is likely that this could have something to do with Mac. Spoilers for the week of January 31, 2022, anyway, hint that Mac might get injured in the whole Peter escape storyline. So, would he be rushed to surgery or something similar? We will know soon.

While Maxie will be worried for her stepdad Mac, she will also have to worry about her daughter. If Peter escapes, Louise will be in huge danger. So, Maxi will have a lot to worry about. More General Hospital spoilers suggest that Brook and Chase will also be alarmed later on. So there is a possibility that Victor might kidnap “Bailey” as a part of his plan.

Further spoilers suggest that Victor’s plan will be in danger when he loses control. Peter will want what he wants, and he might do something about it. GH spoilers say that Maxie, along with Brook and Chase, will make a decision. It is possible that they might finally decide to tell everyone about the “Bailey” secret.

Further spoilers reveal that things will get heated on the haunted star later on, and this could have something to do with Peter. General Hospital spoilers imply that Maxie will have to make another very difficult decision in the week of February 7, 2022. She might have to negotiate with Peter on something if she wants to keep her daughter safe. However, spoilers also confirm that Peter has a mystery weapon to protect himself. So, we will have to wait to see what that is.

Coming back to Sonny, he will meet with Phyllis in the week of February 7, 2022. He will be in much better shape when he checks in with her. However, his grand gesture idea will not have worked. So, he might tell Phyllis about it. General Hospital spoilers claim that when Sonny sees Charlie’s pub all decorated for Valentine’s Day, he might think of using this romantic occasion to his benefit.

More related spoilers suggest that Carly will move forward with a meeting that will affect her future big time. Will she finally decide to give Sony another chance, or will she go ahead with the divorce? Only time will tell.

Liz And Finn Investigate, Terry Goes Out On A Date

Rounding off the spoilers for the week of February 7, 2022, will be Liz and Finn, who will embark on an investigation around the whole Franco thing. Since Liz feels that someone is consciously making moves to tarnish Franco’s legacy, both of them will work to find their top suspect.

While Finn and Liz continue on this mystery, Terry will brace herself for her first date with the dating app match. However, General Hospital spoilers suggest that things won’t go as planned. There will be some mistakes around the identity, and it would lead to new sparks flying.

What will happen on this date? Will Finn and Liz be able to solve the Franco mystery? We will have to wait to know. The upcoming two weeks of General Hospital will bring many twists and turns along with answers, so make sure you tune in and enjoy. General Hospital years on ABC all weekdays. Don’t miss the action.