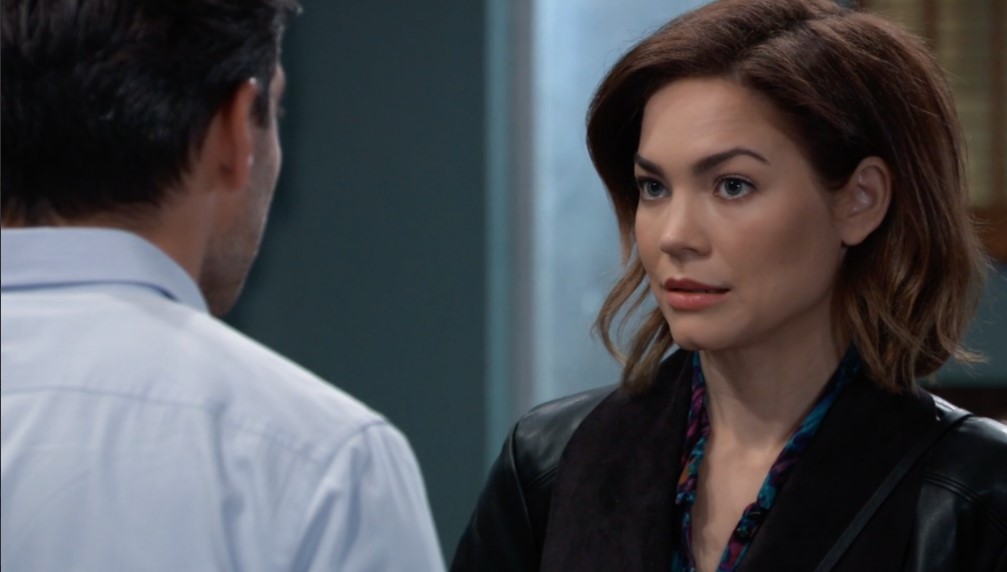 General Hospital update for Monday, April 4, 2022, suggests that more trauma is aligned in Liz’s life. Liz and Finn will finally find the same ground. Then, Selina will set up a meeting to convince Britt. But she might not be on board. Nikolas takes Esme home. However, Ava will give an ultimatum to convince Nikolas. Next, Brook will once again deal with Bailey-related drama. Keep reading to know more.

Liz Deals With A New Threat

General Hospital fans know Liz has been dealing with a stalker situation. Since Hamilton Finn and Liz dealt with Jake Webber’s situation, they are now together to figure out who’s behind this stalker drama. Regardless, Finn wants Liz to know that he will always stay by her side. So he doesn’t want anyone to stop them from pursuing this romance. But another eerie stalker occurrence will talk place.

After Liz talks to Laura Collins, she’ll discover something troublesome. Whatever she’ll find out will ultimately lead her to the next clue in the stalker mystery. But she’ll remain unnerved for now.

On the other end, Britt Westbourne will learn some disturbing news after meeting Selina Wu. Selina will book the entire Port Charles Grill just for a meal with Britt, who’ll find this a bit extra. However, Selina will clarify that this isn’t for a get-together. Selina will seem a bit commandant, leaving Britt wondering whether it’s a trap.

Selina might want to use Britt. Of course, Brad trusts Britt. So, Selina will try to suggest to Britt that she needs to convince Brad to join the Wu family organization. Britt will question why she should do that. Although whoever tried to cross Selina and stayed on her bad side never survived for long. But Britt doesn’t seem afraid of Selina and may refuse to follow her orders. But fortunately, she’ll be alive to narrate the entire story.

General Hospital update for Monday, April 4, 2022, suggest that Britt will recommend Brad for a job at General Hospital. So he’ll move with the interview process to plead another chance to Terry. Though Terry will show concern about Brad’s track record, he’ll hope that he must come clean. It looks like Terry will finally give Brad the position he seeks. But for this, he needs to avoid any criminal activities.

As for Ava Jerome Cassadine, she will wonder whether Nikolas lost his mind. She will fume over Esme and Spencer living under the same roof, especially since she framed Trina. However, Nikolas may remind her that there’s no proof of that. He doesn’t want to leave Esme alone, especially when she’s carrying the Cassadine heir. Ava may at least want her to head to Kelly’s room, but Nikolas will have something else in his mind.

Of course, Ava will be adamant about throwing Esme out of her house, so she will play the “it’s her or me” card and push Nikolas to choose one. But Nikolas may convince Ava to bear this arrangement for a while. Meanwhile, Spencer will convince Esme to take the home pregnancy test. She will vow to take it, and Spencer will promise to deal with the situation together.

Rounding off the General Hospital spoilers, Brook will face an uncomfortable situation. Violet will ask her about Brook’s baby. And that will bring some awkwardness since Bailey wasn’t hers. Brook might tell Violet that she was just taking care of Bailey for her friend. After learning this, Gregory Chase, who joined Finn and Violet for dinner, will be puzzled.

At first, Gregory will enjoy catching up with him, but he will struggle to deal with the baby drama and where Chase stands with Brook. Chase is sensitive regarding Bailey, so it would create some tension between them. Brook will deal with another trauma when Amy shows up for Deception’s song for the IPO launch party. Maxie will try to smooth things up, but Brook will be upset over something Amy says.

It could involve Chase since both aren’t on the same page regarding their romance. General Hospital spoilers suggest that Brook and Chase will start communicating better. Stay tuned. TV Season & Spoilers will keep you updated. General Hospital airs all weekdays only on ABC.