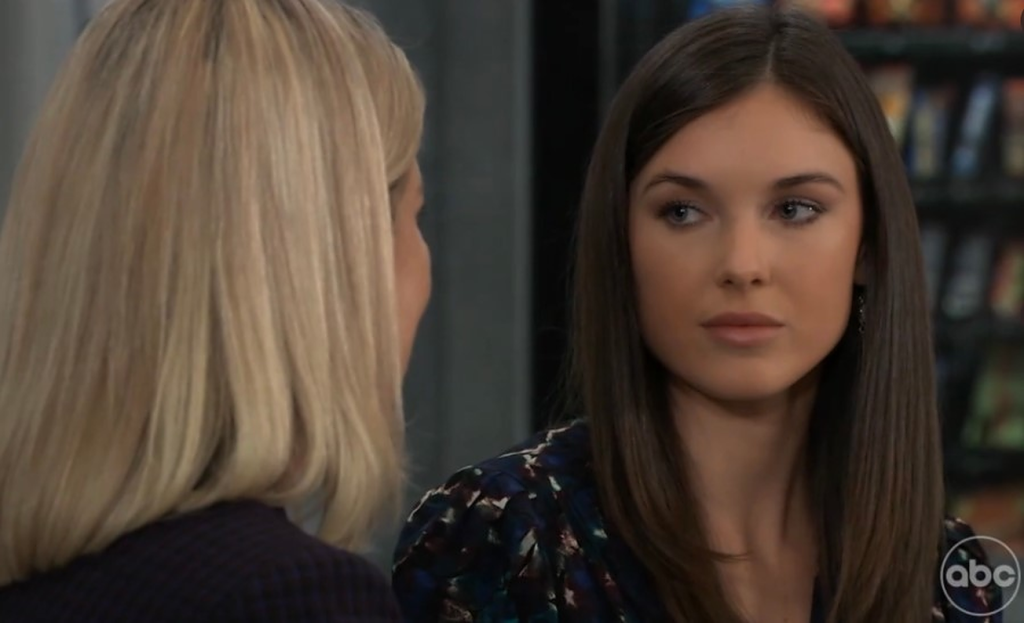 General Hospital spoilers for May 31, 2022, reveal that some courtroom drama and troubles is coming up. To begin with, Willow will trash Nina for the whole courtroom drama. Then, Esme will also try to seduce Nikolas while Ava gives updates to Laura. Viewers will also witness Britt getting into some trouble at the Society Setups event. What more will happen there? Keep reading to find out.

General Hospital spoilers for May 31, 2022, suggest that Willow will grab Nina by her hand and rile her up in the upcoming episode. Nina will ask Willow to let go. But Willow will tell her that she should give up on pretending that she’s a great grandmother. As for Nina, she will insist that she wants what’s best for Wiley.

But it looks like Willow is frustrated about Scott’s attack on Michael in the courtroom. We will also see Willow bringing up Nelle in their conversation and tell Nina that Nelle was lucky that she never got to know that she was her mother.

While Nina and Willow are having a showdown, Michael will worry about his past and what Wiley would think of his father when he’s older. But, Carly will assure her son that he’s a great father and is raising a good kid who’ll understand everything. There will be some sweet mother/son moments as Carly comforts Michael.

Furthermore, General Hospital spoilers suggest that Esme will tell Nikolas that her relationship with Spencer is over. Esme will put up an act to pretend that she doesn’t want to be with a child but a man who can offer her stability. She will make sure that Nikolas keeps drinking so that he opens up about Ava’s nature. Then, Esme will try to seduce Nikolas, and things will become tense and steamy.

Speaking of Nikolas, his wife will meet with Laura Collins at target practice. Ava will fill Laura in with the updates on her falling apart marriage and Victor’s plan as well. Even though Ava has not been able to find all the secrets, she is getting close to Victor in order to gain his trust.

Britt Is In Trouble

Next on General Hospital, viewers will see a Society Setup program happening. This is something that is supposed to be a place where you meet new people. A lot of Port Charles residents will be present here. These people include Drew, Brook, and Britt. But we know everyone is not looking to get a date.

Sam and Dante are very much in love, but Sam will end up being around the pool party. It is likely that Sam will think that Spinelli is the main brain behind this whole idea and talk to him about the same. As for Britt, she will land in some trouble, and Brad will be with her.

General Hospital also spoilers suggest that Terry will want Chet to take his dream job. Amy did come clean about her whole scheme. But Terry will still want Chet not to give up on an opportunity like this. She will also add that Chet might start resenting her if he gives up this job. As per reports, Chris Van Etten, who plays the role of Chet, is moving out of California with his family. So, this means Chet’s storyline is definitely coming to an end. As for Terry, she will find someone for herself very soon.