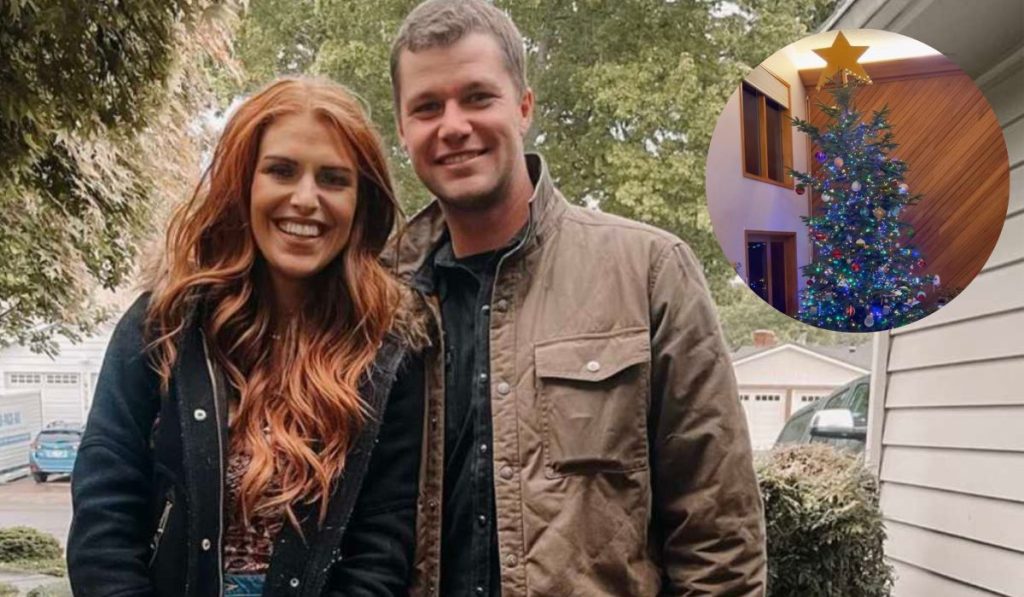 LPBW: Fans Think Audrey & Jeremy’s Christmas Tree Can Cause A HAZARD As It Can “Fall-Over” Anytime!

Although they no longer appear on the show, Jeremy and his wife, Audrey Roloff, are highly active on social media. Audrey tries to show she is always busy, and the pair frequently brags about their slack lives. The duo has long frustrated people with their parenting decision. However, recently, as well, the couple is receiving criticism. Jeremy’s supporters and opponents expressed their opinions regarding his new massive Christmas tree on Instagram. Jeremy documented the process of moving a 16-foot tree into his house for the holiday season in November. However, Jeremy met with criticism quite quickly after that. Let’s read more to find out what people have to say about the giant tree.

Bigger isn’t always better, just like this year’s Christmas tree for the Roloffs. Audrey and Jeremy Roloff, stars of Little People Big World, are criticized for their oversized Christmas tree. Fans believe that their decision to such a massive tree can be dangerous. However, such a huge Christmas tree can fall anything leading to a big disaster. And hence one fan took to Reddit to express their concern. Posting the screenshot of the Christmas tree wrote, “I can’t with the Christmas Tree. Is it me, or is their tree crooked and about to fall over?”. Fans seemed to be really concerned as someone said, “Every picture and/or video I see, the tree looks like it is going to fall over”. Supporting the comment, others also highlighted the fact that the couple has three small kids.

Considering it, fans believe it could be hazardous for the kids as it has a high chance of falling. Viewers of Little People Big World generally dislike Jeremy and Audrey, who will look for any opportunity to bash them. Even for only fifteen minutes of fame, the danger is associated with being in the spotlight. For Jeremy, being in the spotlight is essentially a lose-lose situation since he will probably face criticism no matter what he does. Any content the Roloff pair uploads, no matter how extravagant or unremarkable, will get criticism. Both on and off Little People Big World, Jeremy and Audrey’s sincerity has long been a source of controversy for fans.

Hours after her sister-in-law unveiled the identical toy under the tree, Tori Roloff of Little People Big World surpassed Audrey with a train set. Fans have lately said that the sisters-in-law are at odds with one another once more. Audrey Roloff posted a video on her Instagram Stories showcasing the model train system Jeremy had built to revolve around the family’s Christmas tree. The middle child of Audrey and Jeremy, two-year-old Bode, is seen in a shot with the caption “watching the train” as they observe the toy go around the tree. The train is moving through the gifts stacked at the base of the tree’s trunk in the next short video. In the following clip, Jeremy’s two kids, Radley and Ember, also joined him as “all the stuffed animals” board the toy train.

A few hours later, Tori added numerous toy train pictures on her Instagram profile. The Little People Big World star captured her boys, Jackson and Josiah. They were playing with the train set together with her husband, Zach Roloff. As Jackson rushes to repair the broken links, a giddy Josiah keeps accidentally pushing his walker into the tracks. As Jackson is shown waiting for the moving train later in the Instagram Story, Tori writes the caption, “Admiring his hard work”. The five-year-old is then shown acting the role of a daredevil by putting his foot on the track and then removing it as the train passes quickly by. Keep checking TV Season & Spoilers