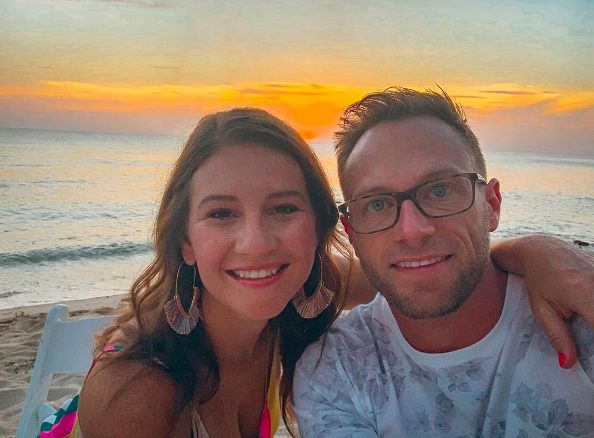 OutDaughtered Danielle Busby Risks Herself Trying To Reunite With Adam

Last week, the mother of the quintuplets successfully completed a business trip. However, just when the OutDaughtered star thought she would be back to her routine with the girls, things took an ugly turn. Someone close to her suffered a tragic loss that took Danielle to Louisiana. What’s more, she took a big risk trying to reunite with her husband by rushing back. Let’s take a detailed look.

Fans of OutDaughtered already know that Danielle and Adam are all in when it comes to enjoying their life. Recently, they spent an entire summer on vacation with their six daughters. However, they had to go to separate destinations once their little ones were off to school again. While Adam left for the mountains for a bonding retreat, Danielle went on a business trip to Dallas in regard to her online boutique.

While Danielle thought she would be back home soon after her business trip, life had other plans for her. Her best friend lost her mother and Danielle had to be there for her. She kept fans updated about her whereabouts. When OutDaughtered fans wondered who is going to take care of the girls, she let them know that Adam was on his way back.

The audience was also concerned about her safety considering the hurricane recently hit Lake Charles. However, while driving she was hoping that it went another way. All in all, the mother of six was able to be with her friend to offer support during a difficult time. However, it looks like the reality TV star put herself in some grave danger hurriedly trying to get home.

OutDaughtered Star Danielle Risks Her Safety To Reunite With Adam

With hurricane Ida nearing the Gulf coast, Danielle had to take a traffic-heavy route to Louisiana from Texas. At the time, 5 hours were remaining until Danielle got home, most of which she spent stuck in the traffic. While she was eager to reunite with Adam as soon as possible, there was another reason why she wanted to go home soon. Dale, her brother-in-law was participating in a charity event dance competition on August 28.

As reported by Tvshowsace, during the time she was stuck in traffic, hubby Adam kept sending Danielle pictures of some of the possible choices for his outfits for Dale’s event. While Danielle praised her husband’s good looks, she wasn’t pleased with being apart from him for 6 whole days. In a different frame, the TV personality revealed that she might not have sufficient food for the entire ride. Fortunately, she consumed a hidden Cliff as a snack to compensate for all three meals.

Even though she had to go to the restroom and was clearly hungry, Danielle pushed through in the hopes of reuniting with her husband and brother-in-law real quick. Finally, efforts paid off and she was there in time for the event. The loving wife also joked about wanting to spend some alone time with her husband by slipping out a little early. Let us know what you think of the risk Danielle took to reunite with Adam in the comments below.