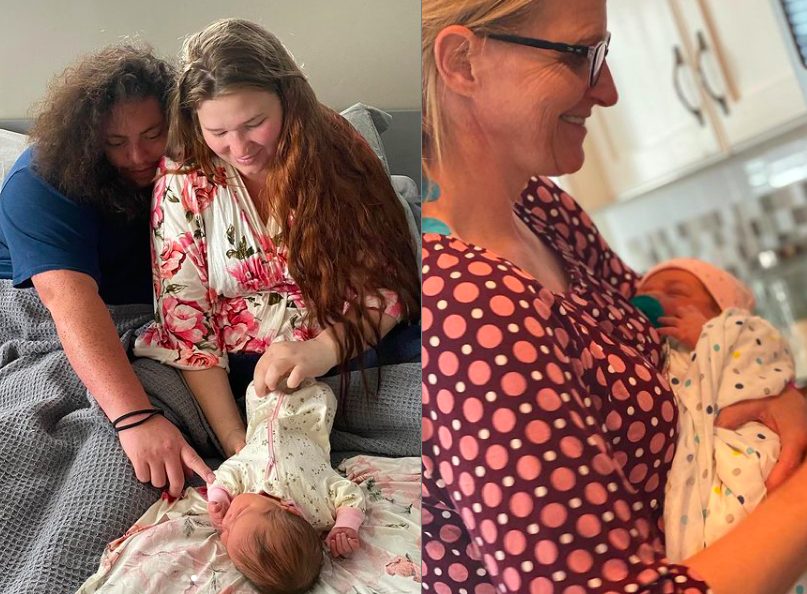 gave birth to a baby daughter named Avalon Asa with husband Tony Padron on Monday. The baby daughter looks adorable and calm in the photos. Christine is so proud and filled with happiness that she put a series of pictures of her granddaughter on social media. She is seen holding the baby close to her heart with a big smile on her face. Let us look into the details of how the Brown family welcomed the new member into the family.

Mykelti announced the news of the baby’s birth on April 8 through her Instagram post. Mykelti and Tony were holding their newborn in the picture. The other picture also gives a close look at the adorable baby. The star announced the news to be ‘happy, healthy fun news.’ The Sun reports the baby to be 9 pounds and measuring 20.5 inches. Mykelti also praised her daughter and says she is gorgeous and amazing. The 24-year-old goes on to inform that the home birth went awesome.

Meanwhile, Tony’s captions about his family have now become ‘a+1.’ The couple also talked about the safe delivery to People. Moreover, Robyn Brown was there through Zoom call for the entire labor. And the home delivery went well for the couple. Everyone is safe and healthy. We wish the newly-been parents to have happy parenting ahead.

Christine Brown was on the top of the world after meeting her granddaughter. Avalon reminds her of the days when she used to hold her daughter while cooking. She finds holding the baby while cooking to be one of her favorite things.

Sister Wives: Mykelti Predicted Way Before That She Is About To Have A Daughter

Mykelti, with her husband Tony, held a pink balloon in one of her IG posts, saying that they are having a baby girl. The new mom revealed that she predicted way before that it’s going to be a girl. Mykelti says that while the whole pregnancy, she felt like a girl. When Tony found out that the baby is a girl, he was astonished to know his wife’s prediction to be true. In an interview with People

, Tony says, “I was happy it’s girl, but I did want a boy first. I’m ready to be overprotective.” Well, we hope the gender doesn’t matter much to the couple.

Mykelti kept her fans thoroughly updated through the entire pregnancy period. The last update was when she was 38 weeks pregnant. The star felt that the baby would be huge. The couple even selected the name before the birth of the baby. Choosing the Avalon is for some reason. Avalon originally comes from King Arthur and the Round Table. However, Mykelti likes the name Avalon way before when she got her first car. She explains the coincidence to be funny. Fans showered love to the newborn baby. Many comment that the baby looks exactly like her father, Tony. Who do you think Avalon looks like? Let us know below in the comments.

Kody Not Present At The Celebration

While this joyous occasion, the fans pointed out that they were not able to see the proud grandfather, Kody Brown. Mykelti’s father

was not present to cherish the loving moment of her daughter. It seems he was not seen because of his and Christine’s public marriage struggles. Fans also commented that if Kody would’ve been present there, then why his daughter hasn’t shared any glimpse of him? One also added that Christine must be really hurt if he wasn’t.