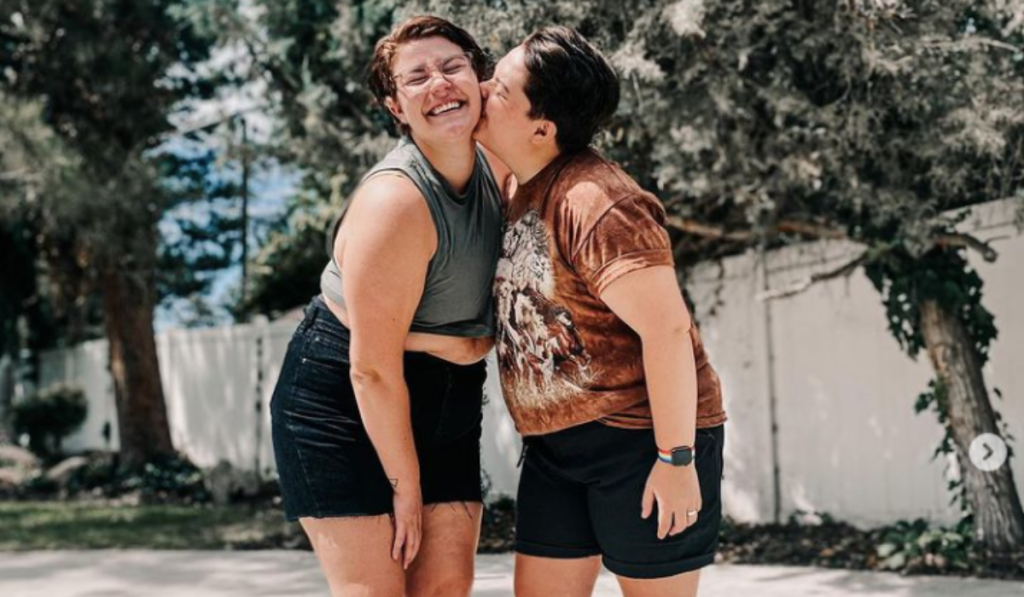 It’s pride month, and everyone celebrates the liveliness of being queer. Similarly, Mariah and Audrey have come a long way by preaching and spreading awareness about sexuality. Hence, no one is behind the closet, and it’s time to throw oneself out! The couple has been actively posting deets of the pride parade. Similarly, Kriss’s latest post has made the Sister Wives fans question Mariah’s sexuality. Well, why is that? Dive in right away.

Sister Wives: Did Mariah Brown Underwent The Top Surgery Just Like Her Partner?

Mariah and Audrey’s journey has been an amazing tale with numerous distractions. First, it was the family and then the society. The couple has deeply felt the fear of judgments and accusations. However, they have come forward with great connection and support to share their story and wake others. Apart from this, Mariah has been an adamant supporter of her partner. Recently, Audrey Kriss went through top surgery. It is a surgery that changes the chest’s shape and size. More so, Audrey has also started getting testosterone.

Meanwhile, Audrey posted a snap on their Instagram where the couple posed together. They went to attend the pride parade in Utah. The pair had their shirts undone. Kriss captioned their post, “Open shirt at Pride this year was big time gender euphoria.” Meanwhile, as Mariah had her shirt undone, the fans wondered if the Sister Wives also underwent the top surgery. Similarly, the TLC audience noted that Mariah had changed her way of dressing. She now wears more crop tops and biker shorts.

Though Meri’s daughter hasn’t responded to the fan’s comment, we cannot say if Mariah has undergone the top surgery. Yet, one thing is surely being with Audrey has greatly changed the celeb, and she has faced many hurdles. The Sister Wives fans love seeing the couple together, and they blessed the pair for a happy future. Mariah and Audrey are yet to marry each other. The couple will also be moving to Denver and Colorado to be close with friends.

Sister Wives: TLC Did Not Invite The Queer Brown Kids For The PRIDE PARADE?

The Brown family has followed the traditional way of living for years. Kody and his giant family believe in the Mormon religion. And some things are against religion. One of being queer. Yet, some Brown kids are brave to honor their sexuality and beautifully accept their true selves. Mariah and Gwnedlyn are those kids. Meanwhile, to celebrate pride month, TLC did a pride parade float. However, there was no sight of the Browns. The fans on Reddit are shocked not to find Mariah, Audrey, and Gwendlyn.

Similarly, Whitney was present in the parade from “Say Yes To Dress” and Shauna Rae from “I am Shauna Rae.” It is typically odd not to spot the Brown stars. But, some fans feel that the couple bid farewell to the show years ago. Hence, maybe that’s why TLC did not consider them. Likewise, Gwendlyn may not be open to such limelight. What do you think? Tell us in the comments below. And stay tuned to TV Season & Spoilers.