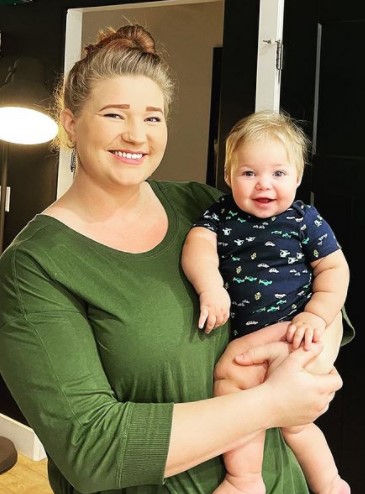 Mykelti Padron went from a sweet and silly teenager to a caring mama. In no time, her life changed when she met Tony Padron. After several years of their marriage, last year they welcomed Miss Avalon. And since then, Sister Wives celeb Mykelti paved her way to being the best mom. As Ava learns new things, her mother took to Instagram to share about her ” Death Grip.” So, keep scrolling down to know about it.

Since her guest appearance on Christine’s cooking show, Mykelti Padron has been making news. The Sister Wives followers are amazed at the then-teenager. That’s because Mykelti has changed a lot since then. Likewise, her adaptation as a first-time mother is quite commendable. It seems like she already knows her way around.

Meanwhile, talking about her daughter, she’s just as lovely as her mother. In the latest Instagram update, the mother shares about baby Ava’s strength and death grip. Turns out the little one wants to see mother 24/7. Hence, she keeps touching her mother to keep her close to her. Mykelti shares it has been a natural occurrence recently.

Therefore, mama Padron calls this grip of Miss Avalon’s “Death Grip.” It could be this, or she really loves her mother. The 25-year-old mom added in the end that she’s enjoying being a mother. And next month, Ava is going to turn one. Sister Wives fans couldn’t help but share similar events with their baby. Some had an 11-month-old too and did the same with their mothers. Another added that motherhood is such a beautiful thing.

Robyn Brown has turned a blind eye to the Sister Wives family members. The fourth wife doesn’t interact with most Brown members. However, the other wives don’t take much interest if she tries to. Meanwhile, with everything going on between Kody and Christine, it’s clear some will try to stay away from Robyn as well. But, turns out Miss Avalon was snapped with Robyn’s kids, Solomon and Ariella.

TLC fans were shocked to find the picture. They wondered if Robyn went to visit Mykelti amid the fight. However, the kids seem to enjoy each other’s company. Ava was sandwiched between Solomon and Ariella. So, did Robyn visit Mykelti? Well, Christine’s daughter herself came forward to clear the confusion. She said she and her kids went to visit the former. Are things getting normal with the Brown family? What do you think? Stay tuned to TV Seasons & Spoilers for more.