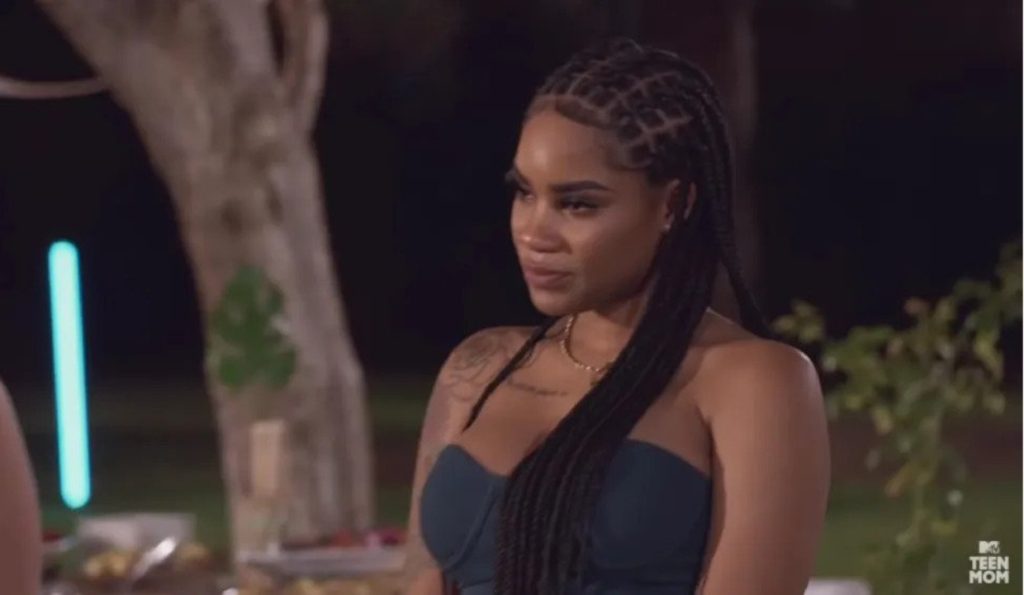 Teen Mom has taken a wild turn since Ashley Jones and Brianna DeJesus’s aggressive fight. The Teen Mom: Family Reunion Season 2 recently released its trailer. The newest version of the show kicked off with a surprise factor. MTV added a major spice in the front by casting mothers from Teen Mom and 16 & Pregnant, the show where it all started. The stars also have their mothers, which is an added spice to the show. Moreover, they went on a retreat at the end of the show, but it didn’t go as planned or rather expected. The event went a little south when Jones and Brianna got into a physical fight, shocking everyone. Keep reading to know what made Ashley Jones lash out!

Teen Mom: Ashely Jones Expresses Frustration Over Co-Stars And Says She Looks Better Than Everyone Else!

Recently, Ashely Jones cussed Brianna DeJesus, and she probably didn’t take it well. The MTV celeb jumped to attack Ashley Jones and had a brawl. Further, the production crew had to intervene to stop the Teen Mom stars. However, the fight didn’t escalate into something hurtful. Well, the fact that it got physical was an issue. It took the crew and other co-stars by surprise and left a weird silence throughout the rest of the show. However, Ashley and her mother, Pastor Tea, stated that it was the production’s fault as they tried initiating a fight for a good TRP. The brawl has been the talk of the town and is not leaving the people’s minds anytime soon.

In a virtual panel that featured Teen Mom stars Jade Cline, Maci Bookout, Kiaya, and Catelyn Lowell, the stars made a few comments on the fight. Kiaya stated that she can’t get offended over whatever ‘this’ girl says as the family is in complete chaos. She directed that the family is comfortable in chaos. The star feels she is better off than them because they’d never get into a mess with her. In the conversation, Kiaya talked about Ashley Jones and Brianna DeJesus and their fight. As per TheSun

, Ashely heard about the panel, and it got on her nerves. She posted a screenshot of the Teen Mom stars and expressed her rage by cussing at them

Ashley Jones tweeted, stating that neither of the Teen Mom stars looked better than her in the virtual panel. She addressed her co-stars as ‘Hating B–ches’. The press show was all about her even though she wasn’t present there, Jones added. The Teen Mom star concluded that she felt like the main character even though she was only in two or three episodes. Moreover, she tweeted that she is ready to take up on all of them since her brother is gone. Jones also warned the stars not to utter another word about her. People who follow Teen Mom and its stars would know that Ashely Jones lost her brother in a tragic incident recently.

Later, the mediator directly asked about Ashley and Brianna’s confrontation in the show. Catelynn Lowell came in and threw light on her perspective on the fight. She expressed that when bodily fluids get thrown around, it is a sign that they are in a pandemic. People can transfer diseases, and fists will surely swing if anybody spits. Moreover, Catelynn concluded that if someone gets spit on, all morals and ethics go out of the window.

The show’s official Instagram shared a clip where the stars got ready to discuss the show with host Dr. Drew. The former stated that Brianna broke while getting her hair and makeup done because she couldn’t sit face-to-face with Ashley. Not just viewers and fans, but Ashley and Brianna are not over it yet. For more exciting news updates, stay tuned to TV Season & Spoilers.