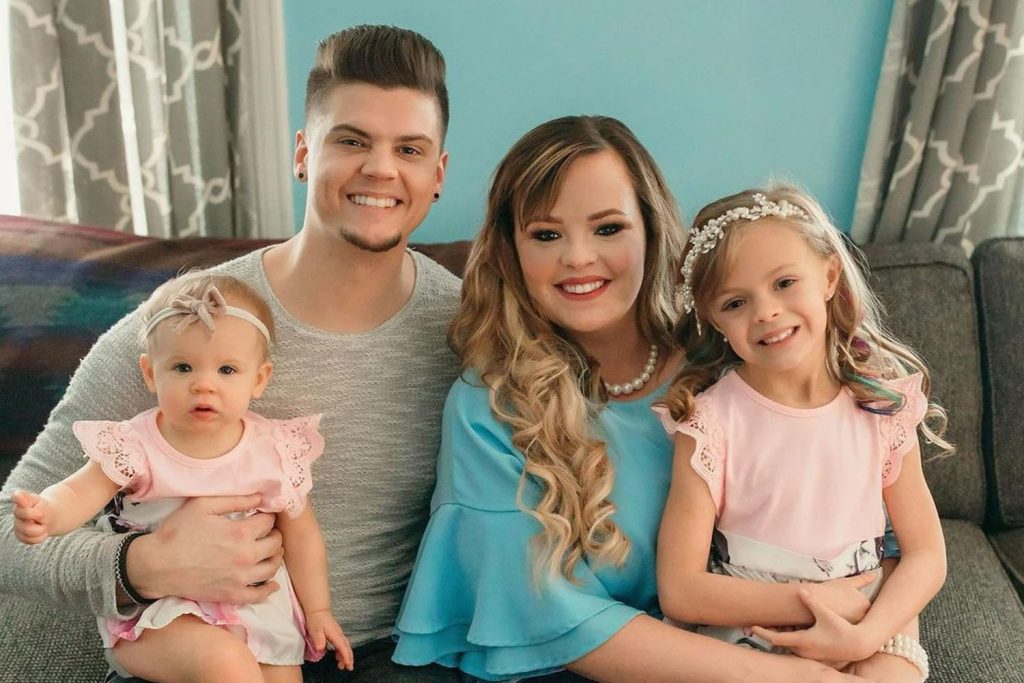 Catelynn Lowell and Tyler Baltierra are one of the only couples to survive in Teen Mom’s history. Their relationship has had huge ups and downs, including a brief separation trial in 2019. The Teen Mom stars have canceled their engagement twice and finally tied the knot in 2015. They are parents to four daughters, Carolyn, Vaeda, Novalee, and Rya. Carolyn is the high-school sweetheart’s first daughter they had to put up for adoption due to a lack of resources to raise a child. However, they have grown up and are raising three daughters. While Tyler Baltierra accounts for his fitness journey, his wife made a fun comment which could earn them bucks.

Teen Mom: Catelynn Wants Husband Tyler To Make Bucks Out Of His Biscuits!

Raising three children is a task, and Teen Mom mother Catelynn has a plan. Tyler Baltierra has taken on a fitness journey to work on himself. He has shared his progress over time with followers and fans. Further, the father of four also inspired Catelynn to join the gym and work on her fitness journey. He updates his gram family with his muscle toning routine through several shirtless pictures. However, his wife is after him to get signed up for an OnlyFans account. For reference, OnlyFans is an app where people pay for content through a monthly membership.

Several other Teen Mom stars include Farrah Abraham, Jenelle Evans, and Briana DeJesus. Baltierra’s sister Amber Williams is also on the online platform. In an exclusive interview with E News, Catelynn shared her wish for her husband to join the app. She is impressed and inspired by Taylor’s work ethic and has also changed her lifestyle. Catelynn believes gyming is good for her husband’s mental health and gives him space to grow. However, she feels that signing up for OnlyFans would bring them a good sign income and earn big bucks.

Teen Mom stars Catelynn Lowell and Tyler Baltierra are focused on raising their three daughters and keeping their marriage alive. They have been into a lot of therapy and couple therapy. She added that it took them a lot of nerve and collective growth to stay together. Over time, they have become each other’s safe spaces and progressed with a lot of hard work. In this complete process, they happened to grow towards each other than apart, Catelynn concluded.

In an early season of Teen Mom, Catelynn made an inappropriate comment which resurfaced on Reddit. The video featured her in the driver’s seat with her husband, Tyler, in the passenger seat. Moreover, the couple’s daughter Novalee was seated in the backseat, secured with a seat belt. As Tyler looked grumpy, Catelynn teased him and called him ‘grumpy bottom’. The husband failed to react, so the Teen Mom star complimented him, saying he looked handsome and sexy.

She went on asking if they would have a party in his pants later while their daughter sat and listened to this conversation in disgust. The camera panned onto her face of annoyance. Viewers slammed Catelynn for using such dirty language in front of her daughter. Others felt sorry for Novalee and called her a ‘poor kid stuck in an inappropriate situation’. Should parents avoid using such words and language in front of their kids? What is your take on this? For more exciting news updates, stay tuned to TV Season & Spoilers.