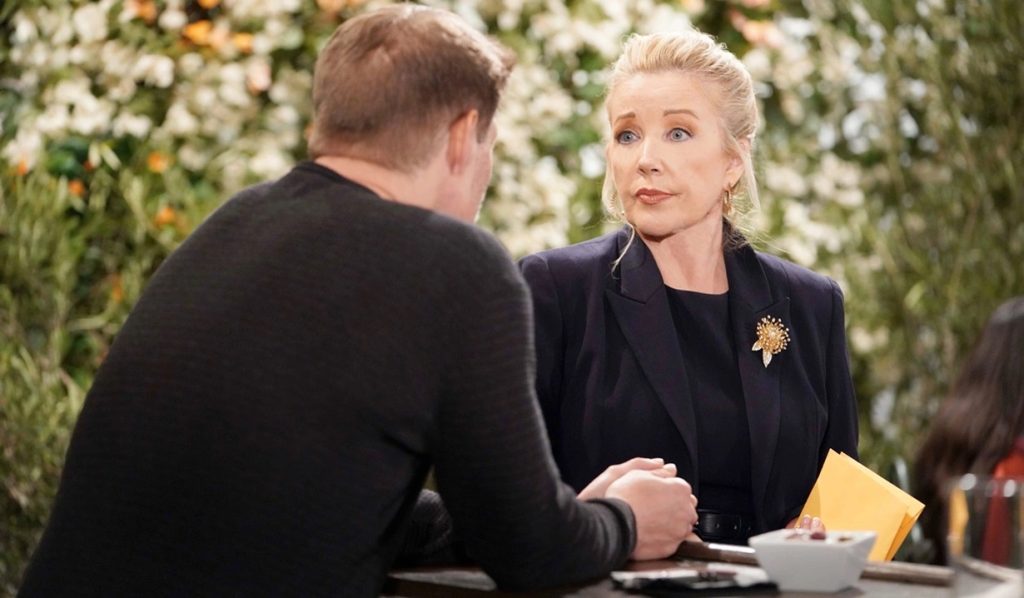 The Bold And The Beautiful Recap For Monday, September 26, 2022: Nikki In LA, Thomas & Brooke Fight

According to The Bold and the Beautiful recap for Monday, September 26, 2022, saw Nikki make the most of her time in Los Angeles. First, we saw Taylor get candid with Ridge as she asked him to introspect. Later, Nikki arrived at Forrester Creations and picked up Eric’s latest work. She then went to meet Deacon and picked up an envelope that would help her take down Diane.

During her encounter with Deacon, she ran into Sheila in disguise and failed to recognize her. Elsewhere, Thomas argued with Brooke because she thought peeling an apple was “dangerous”. He informed Taylor about this fight, and she promised not to let Brooke harm her family. What is Taylor going to do about this whole thing? Here is everything to know.

Taylor & Ridge Have A Chat

In the September 27, 2022, episode of Bold and the Beautiful, Thomas pointed a knife at Brooke in the Forrester Mansion. He told her he was serious and sarcastically, “keep it up”. Of course, Brooke thought Thomas was threatening her. Taking it a little further, Thomas promised Brooke that she wouldn’t be able to bother Ridge or his family again. But, this situation got very tense and Brooke was scared.

While Brooke dealt with Thomas, Taylor told Ridge that she would never forget their time in Monaco at the Cliff House. Furthermore, she acknowledged she was confused about her feelings. However, Taylor confessed she thought she and Ridge would be together if they were meant to be together. She did not want to coerce him, but she asked him to think about how his relationship with Brooke was going.

The Bold And The Beautiful Recap: Nikki Arrives At Forrester Creations

Meanwhile, Nikki was happy to see the Forrester original Eric offered for Summer’s vow renewal at Forrester Creations. Nikki met Steffy and Hope, and they discussed the terrible shootings. However, Steffy assured Nikki everything was fine now, and she would be happy for Nikki to meet Finn someday.

Nikki was furious about what Sheila did to Steffy and her family. Moreover, Nikki was shocked to see how a sociopath like her could give birth to a kind and compassionate man like Finn. Later, Nikki praised the gown again and told them she needed to do one more thing before leaving Los Angeles.

In this episode of The Bold and the Beautiful, Deacon expressed his discomfort in their living conditions to Sheila. Moreover, this could not continue if Sheila still dreamed about a family reunion. Later, Deacon grabbed an envelope and gave it to Nikki at the II Giardino. It contained important information that would help Nikki take down Diane.

Later, Nikki bid Deacon adieu and ran into Sheila in disguise as “Lina”. Taylor arrived at the Forrester Mansion, where Thomas told her about his fight with Brooke. However, Taylor was not happy about the drama Steffy had caused by answering Ridge’s phone. Thomas insisted Brooke accused him of being dangerous to Douglas because he was peeling an apple. Taylor was furious and would not let Brooke start another fight. The Bold and the Beautiful airs weekdays on CBS. Stay tuned with TV Season & Spoilers for the latest news and spoilers.