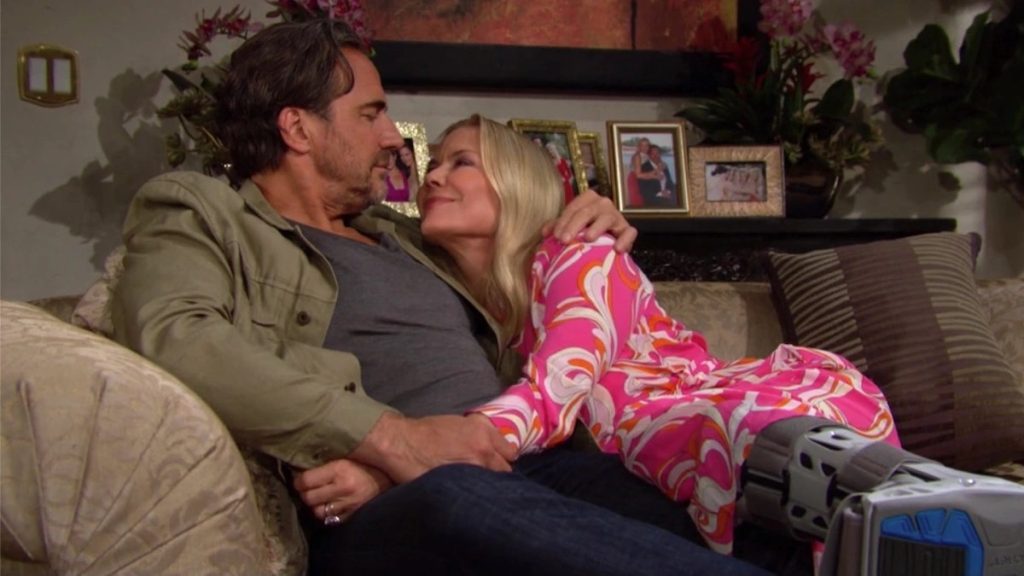 The Bold And The Beautiful Recap For September 6, 2022: Deacon Drags Sheila Away, Brooke & Ridge Kiss

The Bold and the Beautiful recap for Tuesday, September 6, 2022, revealed the story of Sheila’s disguise. Deacon arrived just in time to stop her from entering the Cliff house. He demanded Sheila leave. Steffy arrived and was shocked to see Deacon at her backdoor; he made an excuse and left. Meanwhile, Sheila felt confident about telling Finn the truth.

Elsewhere, Brooke talked to Ridge about her concerns. Ridge offered to stay at the Forrester mansion and help Thomas. Brooke thought that was a bad idea as they had just begun reconnecting. Then, Thomas talked to Hope about their future as co-parents. Hope was apprehensive but confessed Thomas could become a full-time father if he tried. What would she decide? Keep reading to find out.

In this episode of The Bold and the Beautiful, Deacon grabbed Sheila and pulled her away before she could enter the Cliff house. Previously, we had seen her eavesdropping on Finn and Steffy’s conversation in her disguise as “Lina”. Deacon scolded her for sneaking out of his house and demanded she returns. Steffy arrived and was surprised to see Deacon at the backdoor.

Deacon pretended to think Steffy was by the beach. He suggested he was there to tell her he was happy to they were alright. Steffy was grateful to Deacon for calling 911. She invited him inside, but he left. Later, Steffy told Finn about the encounter. She also told him about the nightmares she was having. Finn assured her he was here for her and there was nothing to be scared of.

Meanwhile, Deacon scolded Sheila for her behavior. The two of them got in a heated argument. After that, Deacon left for the bar as he was out of beer. When alone, Sheila dreamed about telling everyone she was alive on her next visit to the Cliff House.

The Bold And The Beautiful Recap: Brooke & Ridge Patch Up

Brooke expressed having trust issues with Thomas at Brooke’s place because of his past. Ridge thought Thomas would change if he had an opportunity to prove himself. He also discussed working with Taylor to ensure everything goes well for Thomas and Douglas. Brooke was agitated, but Ridge said it was his job to ensure Thomas’ well-being as his parent.

Brooke continued to have concerns regarding this decision. Ridge suggested he move into the Forrester mansion for some time. Brooke mentioned Hope as the person responsible for things and did not want Ridge to move out of her house again. Furthermore, Brooke suggested it was a bad idea for Ridge to move out as it was essential for them to reconnect. The couple shared a passionate kiss.

At the cabin, Thomas asked if Hope was alone. Hope was uncomfortable, but Thomas explained he wanted to talk about their life as co-parents. He insisted they were on the same team, but Hope was apprehensive. Thomas agreed about Hope’s fears regarding Douglas’ future, considering he had faced so much upheaval in his life.

However, now, Thomas wanted to be a full-time father and set boundaries. Hope confessed she thought Thomas could make it work. Hope insisted Douglas belonged at the cabin. Thomas asked her to prevent conflict and try their best to figure out a solution. The Bold and the Beautiful airs weekdays on CBS. Catch the latest news and spoilers from the show on TV Season & Spoilers.