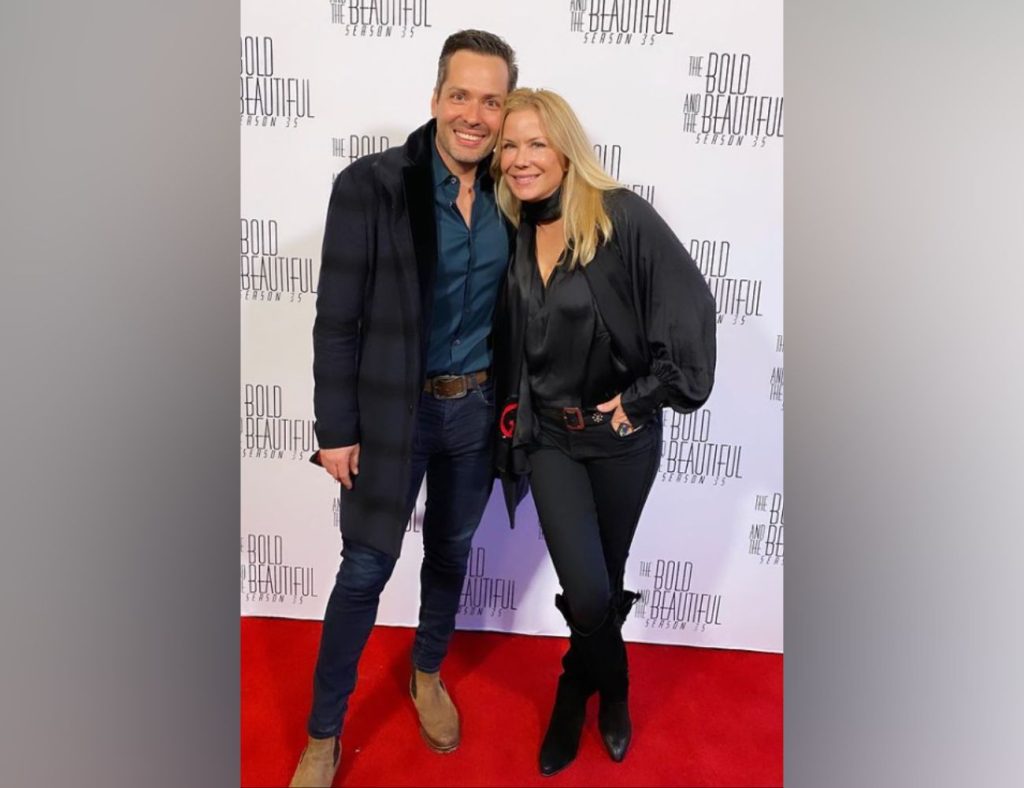 The Bold And The Beautiful: Reel-Life Real-Life Couple Revealed!! (Part 1)

The Bold and the Beautiful: To love and to be loved back by the same person is probably one of the most beautiful feelings we can experience as humans. While our favorite characters of The Bold and the Beautiful are constantly tackling torrid and turbulent relationships, the talented actors portraying them have all been quite blessed in real life with beautiful partners.

We have put together a list for you of these amazing actors with their real-life partners, and a little sneak peek into the heavenly and stable life they have weaved together. So waste no time and dig in to feel the love!

The Bold and the Beautiful: Katherine Kelly Lang and Dominique Zoida

on The Bold and the Beautiful and has been part of the show for 35 long years now! Over these years, the character has gone through a lot of ups and downs in her romantic relationships. Even right now, she is fighting for her husband, Ridge.

In real life too, Katherine has faced two failed marriages before finding “the one”. She has three beautiful children from her former partners. However, for the past few years, The God of Love has been smiling down upon her as she seems really happy with her long-time boyfriend, Dominique Zoida. “I have found the love of my life”, she exclaimed in an interview.

The love birds met for the first time in 2013 and have since then progressed towards building a steady relationship. They often take to their social media accounts to share little peeks into their lives with their fans.

The very suave Thorsten Kaye has been portraying the character of Ridge Forrester on The Bold and the Beautiful for almost a decade now; currently, B&B fans are thoroughly enjoying the spicy chemistry between him and his on-screen wife Brooke Logan Forrester (Katherine Kelly Lang), after a series of failed and torrid relationships.

However, unlike his on-screen character, Thorsten is blessed with a very stable and happy relationship with his partner Susan Haskell. She also is an actress by profession. Interestingly, the two of them met on the sets of the TV show One Life to Live, where they played each other’s love interests. Thorsten and Susan together have two lovely daughters, McKenna (born Feb 2003) and Marlowe (born Jan 2007).

The heartthrob of millions of fans, Lawrence Saint-Victor, plays the very charming Carter Walton on The Bold and the Beautiful. Fans recently saw some really romantic scenes between Carter and Quinn. They spent some cozy time together after Quinn crashed and stopped his wedding to Paris in the previous episodes. “Quarter” as Quinn and Carter fans like to call them, are one of the most loved on-screen couples of soaps.

However, In real life, Lawrence enjoys a rather uncomplicated relationship with his wife Shay Flake. They were College sweethearts and happily got married in the September of 2007. (Couple Goals Alerts!) Lawrence and Shay together truly are what fairy tales are made of! Check this beautiful and heart-warming post Lawrence shared for his wife on Instagram.

John McCook needs no introduction; he is an Emmy-winning soap opera veteran who plays Eric Forrester on The Bold and the Beautiful. The actor has been playing Eric on the show since 1987, making it a three-decade-plus run and that is commendable! In his long and memorable journey on B&B, Eric Forrester has romanced many women, several of whom he even married.

However, the story is quite different for John McCook in real life! He turned into quite the quintessential one-woman man (and we love it!) after he met his partner Laurette Spang. John McCook was married twice before, but none of the marriages worked for him. But, as they say, third time is the charm!

John and Laurette, who also is an actress, have been married since 16th February 1980. Together they have three children, Jake, Becky, and Molly. Molly is also an actress best known for her role in Last Man Standing.

The Bold and the Beautiful: Don Diamont and Cindy Ambuehl

The extremely dashing Don Diamont plays William “Bill” Forrester on The Bold and The Beautiful. Like most of his soap opera counterparts, our man Bill too, has quite a scandalous life on the soap opera. He has had numerous romances and marriages over the years on B&B.

Talking about Don’s real life, his first marriage was to Rachel Braun, and he has three children with her. However, they couldn’t last long. On 12th June 2012, he married his long-time girlfriend, actress Cindy Ambuehl in France. The couple together are proud parents of twin sons.

On a very heartening side note, after Don’s sister passed away, he raised her son as his own, calling him his seventh child. Well, you truly won our respect for that, Don! Just look at how happy and gorgeous Don and Cindy look together in this selfie posted by him on his official Instagram!

Our hearts are so warmed up by these wonderful real-life love stories of our favorite stars from The Bold and the Beautiful and we just had to share them with you all! Although we are sure you will be smiling ear to ear reading their stories, we would still love to hear how it made you feel.

Share with us in the comments which was your favorite amongst these and how excited are you about Part two of this list, yes! You read it right! There is going to be a Part Two of The Bold and the Beautiful Real Life – Reel Life couples. So stay tuned to TV season & Spoilers for more!