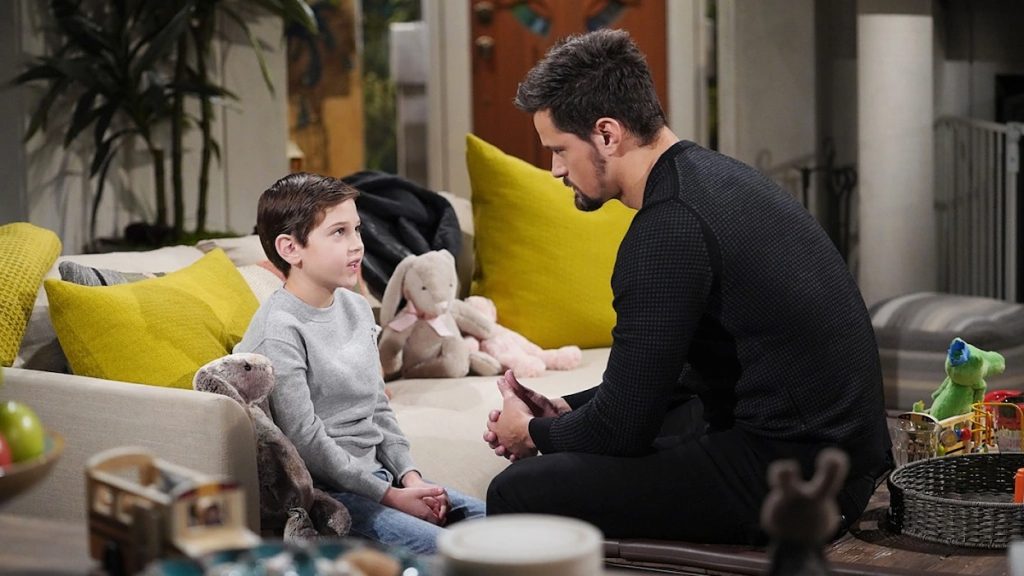 The Bold And The Beautiful Spoilers For Next Two Weeks (August 15-26, 2022): Ridge’s Confession To Brooke, Douglas Makes A Choice

The Bold And The Beautiful spoilers for next two weeks starting from August 15-26, 2022, reveal that Ridge will finally make a confession to Brooke. Steffy will push Ridge to come back to Taylor. However, things might not be that easy. In the meantime, Li will confide in Bill. She will share about her broken marriage and how Jack cheated on her with Sheila. Meanwhile, Eric will express his support to Thomas wanting Douglas back in his life. On the other end, Quinn and Carter will get caught, and things are going to get messy.

Next week from August 22-26, 2022, Deacon is likely to get into trouble. He will wake up to a stranger lying beside him. On the other end of the town, Douglas will make a choice between his mom and dad. Keep reading and find out the way the storyline is crawling to.

The Bold And The Beautiful Spoilers For The Week August 15-19, 2022: Ridge’s Confession; Ridge-Taylor To Connect?

The kissing gossip was already spreading at the speed of lightning. This made Ridge decide that he will confess to Brooke himself instead of someone else telling her. The Bold And The Beautiful spoilers for the week say that Ridge will finally confess to Brooke about kissing Taylor. She will then realize that Taylor still has a good control over Ridge.

However, fans can expect Steffy to push Ridge to sense his feelings. She believes that Ridge should be back with Taylor. She will pair them both and want them to be together. In the meantime, she will urge Taylor to accept Ridge in her life again. It is teased that Ridge, Taylor, and Steffy will talk about Brooke and her past of betrayals.

Elsewhere, things will get very steamy as Quinn and Carter will have a make-out session in the office. Unfortunately, they both will get caught while kissing, and things might get messy. Now, the question is, who will witness it first? It would be interesting if it is Paris or Eric.

Fans already know that Bill’s life is lonely. However, it looks like that is about to change. The Bold and the Beautiful spoilers say that Li will have a chat with him. she will open up about her broken marriage to him. How Jack cheated on her with Sheila and the lies which he told to her about Finn.

However, she knows that it’s time for her to move on in life. Probabilities are there that Bill could be the right choice to move forward. It would be good to see two people who are already shattered in their personal life to hold hands. Whatever it is, we will know if this pair has a chance in the future.

The Bold And The Beautiful Spoilers: Deacon’s Life Gets More Tragic

After the confession, The Bold and the Beautiful spoilers say that Brooke might go to Deacon. They both will have a conversation where Brooke will tell him how much hurt she is. She knows that Ridge will never give her the respect and loyalty that she deserves. Later, Deacon might wake up to a stranger lying beside him on his bed. He is likely to land into more trouble over the course of time.

The Bold And The Beautiful Spoilers For the Week August 22-26, 2022: Douglas Makes A Choice

Things are quite messed up with Hope and Thomas. The spoilers show that Thomas will tell Hope that he is willing to take Douglas back with him. Hope approaches her dad in the aftermath. They both have a conversation. Deacon did tell her to be confident because Douglas will always be by her side. However, things don’t look like in favor of Hope. This time, Thomas will again approach her and might suggest to directly ask Douglas of what does he thinks.

Hope knows that Douglas is old enough to know whom he wants. He might pick Thomas, which will leave Hope completely heartbroken. But still, she will know that she has to respect his choice. All his life, the kid has stayed with his mother. It is obvious that he might need a fatherly care in his life.

In the meantime, Brooke will cross paths with Taylor. She will definitely not like the idea of Ridge and Taylor getting back together. It is teased that she might lash out at Taylor for kissing her husband. However, her husband is also at fault clearly. Nevertheless, things between these two women are supposed to get rougher by the course of time. The next two weeks will be the weeks of confession and confrontation. Do not miss it. Watch The Bold And The Beautiful, which airs every Weekdays on CBS. for more information on updates and spoilers, visit our website, TV Season & Spoilers.