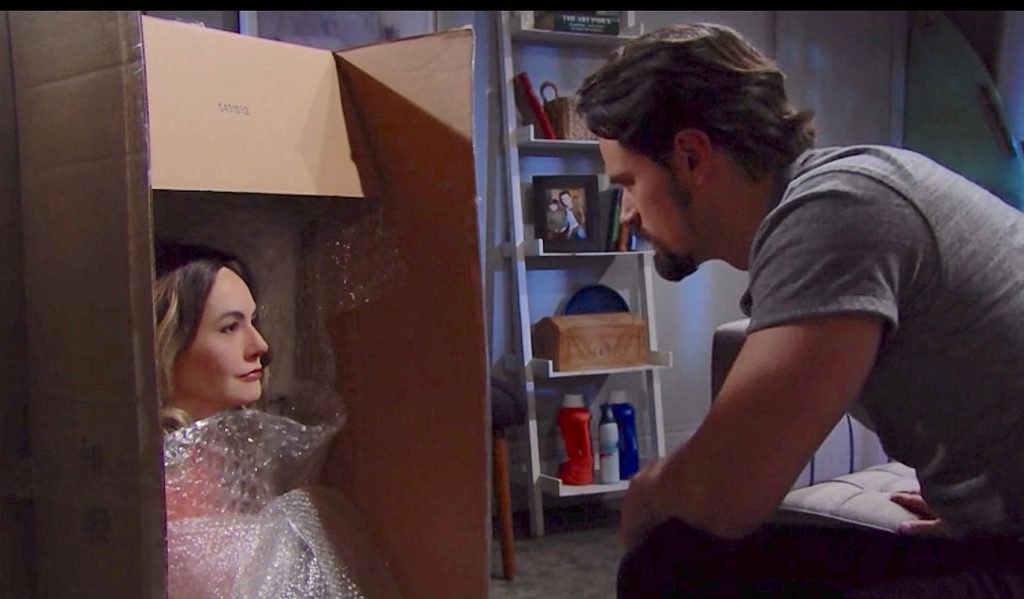 The Bold And The Beautiful: Thomas Goes CRAZY! Brings Back The Mannequin?

The Bold And The Beautiful spoilers tease that Thomas might bring Hope’s mannequin again to his house. So, it is certainly going to shake Hope’s world and make her question Thomas’ current mental status. Who might be the one to find it? And, what might be the reason that Thomas has bought back the mannequin, which has some terror-inducing memories? Keep reading to know what might uncover in B&B.

Thomas’ Obsession With Hope In Past, Makes A Mannequin That Resembles Her!

Long-time The Bold And The Beautiful fans might remember the obsession Thomas had with Hope. Initially, people might have thought he is just a mere stalker or someone crazy in love. However, The Bold And The Beautiful gave a major twist to Thomas’ character by highlighting his mental stability. Obsession is fine, but when Thomas bought a Hope lookalike Mannequin at home, fans got scared with the direction the soap has taken.

Well, we surely have seen mannequins in horror movies or in fashion shows. But in soap operas, a character obsessing over another character and living in a delusional world with a mannequin is the rarest of the rare. Thomas went to the extent of dating that mannequin and considering it Hope. Once Liam also caught him kissing the doll.

However, later Thomas was diagnosed with some brain issues and was taken for surgery. All this was in the past. Now, coming back to the present, fans might know the level of scheming Thomas is doing. Be it to get closer to Hope or to separate Brooke and Ridge, he is doing everything in a sinister way. So, what might be the next thing Thomas does to scare viewers? The Bold and the Beautiful spoilers say that Brooke will have a face-off with Steffy where she will remind her of the mannequin incident. In soaps, nothing is mentioned randomly, so does it mean that the mannequin will be back on-screen? Let’s discuss what might happen next.

The Bold And The Beautiful Spoilers: Thomas Brings Back The Mannequin, Stuns Hope

The Bold And the Beautiful spoilers suggest on October 27, 2022, Brooke will have a face-off with Steffy. Over there, she will remind her of Thomas’ past deeds. The Bold And The Beautiful spoilers teased that Brooke will interrupt when Thomas is going to confess his feelings for Hope. Looks like something else might happen again, which will lead to Brooke and Steffy’s face-off. Brooke will remind Steffy just how much obsessed Thomas was with Hope. In that, Brooke will also remind her of the mannequin incident. This particular storyline was one of the most bizarre and terror-inducing storyline B&B has ever come up with.

So, mentioning it randomly might be the case. In soaps, things are not mentioned randomly. So, chances are there that the same horror might return to the storyline soon. Other The Bold and the Beautiful spoilers already mentioned that Hope will get an extreme shock in the upcoming episodes. So, it might be this mannequin that Thomas has bought back to his house.

Given how Thomas is scheming to get back Hope in his life, it won’t be a surprise if he goes to this extent. As for Hope, she might get shocked to see the doll, but Thomas might assure her that he might use it up for the fashion week event. Whatever the case, Hope will surely be reminded that she is in more danger than she thinks! So, stay tuned and watch The Bold And The Beautiful, it airs every weekday on CBS. For more updates and spoilers, visit our website, TV Season & Spoilers.