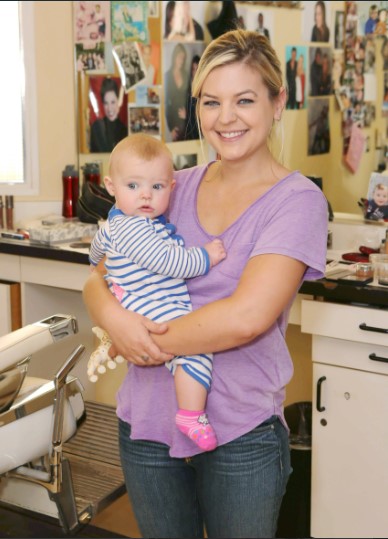 WHO IS HARPER ROSE BARASH? EVERYTHING ABOUT THE GH STAR’s DAUGHTER

Harper Rose Barash is the daughter of General Hospital star Kirsten Storms and Brandon Barash, who played the role of Stefan DiMera on Days Of Our Lives. They welcomed their beautiful baby girl on January 7, 2014.

The father took to Twitter and shared the news with his fans. He wrote, “Our passenger has touched down and arrived. Welcome to our world. There has not been a more fulfilling day.” Barash also shared photos, and he added, “Just the three of us…well, the Queen, the Princess, and a dad’s hand.”

Kirsten Storms and Brandon Barash were married for three years. Storms and Barash got married in 2013. A year later, the couple welcomed their daughter. However, their marriage ended in 2016. In an interview back in the time, Barash said that the couple was splitting “amicably” due to “the cliché irreconcilable differences.”

Prior to their split, Storms and Barash also sought therapy. Storms shared, “We went to therapy for a long time, trying to figure out how to communicate better with each other. It’s not anything that we dislike about each other.” He furthermore added that “We’ve decided that raising our daughter in two separate homes would be a healthier choice for all of us.”

When the duo decided to divorce each other, they vowed that they would continue to co-parent their daughter. In 2016, Rose was just three years old, and since then, her parents have done an amazing job at sticking to their word. In addition, Kirsten and Barash are amazing parents, and it seems like they would do everything to keep their daughter protected.

Brandon and Kirsten celebrated their daughter’s 8th birthday in January. Harper’s mother posted a picture of her on Instagram, saying that she loves how this girl knows how to find joy in anything. She also added that her energy and spirits are goals. Even though her parents are in the daytime drama business, her life is full of laughter and love.

Moreover, Storms and Brandon never leave an opportunity to show the world how much they love and enjoy their daughter’s company. So, let’s go through the timeline of love and laughter that this small family brings to us.

The General Hospital star who plays Maxie on the ABC soap tweeted the couple’s happy baby news on the day of her daughter’s birth. She also wrote, “Daddy’s Lil Princess.” This picture is so cute; it melts our hearts.

In April 2016, Harper and her father made a new definition of procrastination. The 34-year-old actor wrote, “If procrastinating means loving on this wee one, I’ll take it.” Moreover, In this picture, the father/daughter are making the cutest faces and expressions.

In June 2019, Harper graduated from her kindergarten, and the proud parents shared a beautiful picture of Harper dressed up in a blue Graduation dress and hat.

Kirsten posted a picture of Barash and Harper hugging as a sweet tribute to her daughter’s father. She wished him a very Happy father’s day and mentioned that she would not write anything mushy and sentimental. However, Storms wrote about Brandon’s wonderful father and how his love for Rose is endless. And, this picture makes us all very emotional, and we might miss our father a little now.

5. Harper On The Driving Seat

The Emmy nominated actor shared a photo of her daughter in the driving seat, and he wrote that someone likes being in the driver’s seat. In addition, he also told his fans that the car was off and parked in the driveway with many winks and smiles.

The eight-year-old also made her debut in General Hospital when she was one year old in the role of Storm’s on-screen daughter, Georgie. We all love small families, don’t we? TV Season & Spoilers will keep you updated with all the news. Keep an eye on the space to catch the updates related to daytime drama.