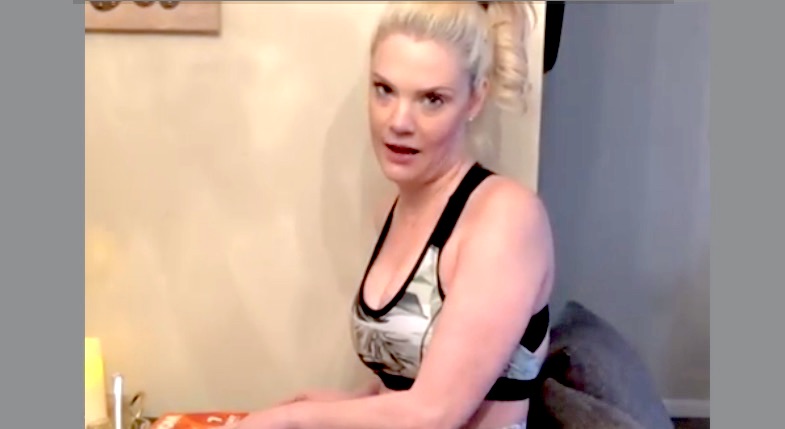 90 Day Fiance: Is Ashley Really Feeling Sorry For What She Did To Nicole?

Amid all the cheating scandals, Ashley Martson is undoubtedly facing a rough patch. For obvious reasons, the ’90 Day Fiance’ star seems a little unstable. Her Instagram stories reveal her frustration. As we all know, she withdrew her divorce papers even after her husband was involved in a cheating scandal right after the duo got married. It seems like she is now putting a limit on forgiveness and she might take stern action. Let’s take a look at what’s going on in Ashley’s life.

90 Day Fiance Ashley Insults Nicole And Slams Her About Azan

Ashley recently called Nicole the laughing joke of TLC. She concludes that Azan doesn’t want Nicole and her constant efforts to make the relationship work are all going in vain. She also stated that his lack of love for Nicole is the main reason why he is procrastinating his visit to the states. John Yates called Ashley out for crossing a line of attacking someone at a personal level.

Nicole once made a comment about Ashley keeping secrets. She defended herself by saying that she didn’t take a shot at her personally. However, she deleted her initial comment. In the end, she perfectly summarizes Ashley’s marriage and the fact that she is on the edge. Ashley also put her heart and soul in a relationship and got nothing out of it. She then persuaded fans to be cool about it and stay kind to everyone. She also apologized to Ashley and hoped that she gains a fair share of happiness whenever it is about to come.

But there was something about Ashley’s apology that doesn’t make it sound genuine and sincere. So, she took to Instagram on 20th April. In a series of video clips, she apologized for hurting anyone or for being mean. She also mentioned that what she did was inexcusable even though she had been going through a lot. She mentions that she is not like this and doesn’t understand how she stooped to a level so low. Ashley also goes on to say that she is sure that a lot of hate is coming through her way only because she deserves it.
https://www.instagram.com/p/BwXvodunVmi/?utm_source=ig_web_copy_link
She made a statement following the video that made it clear that she is dealing with a lot. Ashley also persuaded the viewers to watch the show. She is hoping that when fans know of her situation, they might sympathize with her more. Ashley went on to state that in no way did she mean to hurt Nicole. She messaged her to fix it and Nicole was kind enough to offer help in her bad times. Martson reacted due to things going on in her own life, not because of what Nicole said or did. She blames her anger, pain, and insecurities behind the feud.
When Ashley is facing tough to endure circumstances, she thinks of her track record of getting through the bad times. Since till now, it’s 100%, she thinks it’s pretty good.

Are Jay And Ashley Getting Divorced?

Rumors have been flying that Jay has gotten another woman pregnant. Even though there is no confirmation on this, we know that the star has to make a court appearance on the orders of the U.S. Department of Homeland Security. When Ashley posted the information about Jay going to a strip club in her car spending her money, fans have been supporting her all through. She thanks fans for their support and makes sure that she makes her appreciation clear.
https://www.instagram.com/p/Bwke8GwHnJJ/?utm_source=ig_web_copy_link
John Yates also reveals that the documents hinting Jay’s deportation are all in. They are questioning Jay’s immigration status and it doesn’t seem fortunate for the Jamaican playboy. Jay and Ashley are expected to make an appearance in the 90 Day Fiance: Happily Ever After Season 4. Stay tuned to watch the drama between the on and off couple.
As it seems, Ashley has gone out of her way to forgiving jay and gave him a second chance even after he cheated on her once. But if the pregnancy rumors are to be believed, Jay can’t seem to have any self-control and concern for his immigration status. He knew this could get him deported but he still took a shot. Now, it seems this can turn out to be a massive blow to the Jamaican star. Let us know what you think Jay’s fate should be.