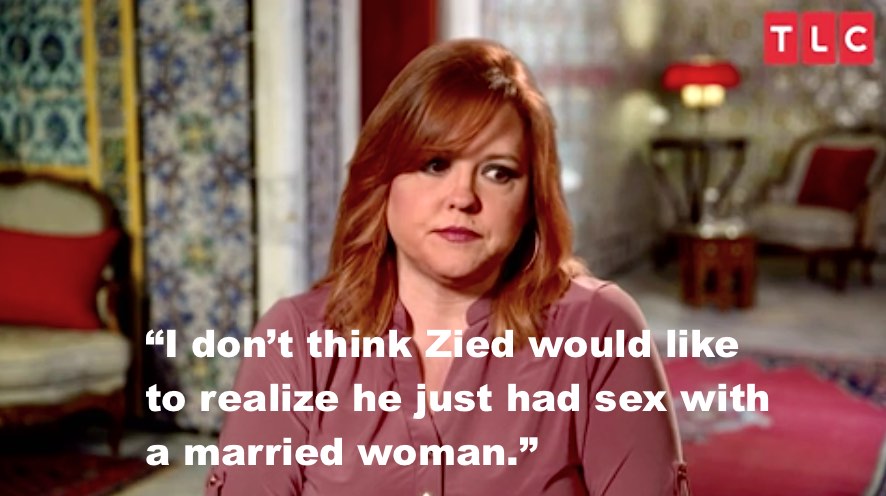 The preview trailer for 90 Day Fiance: Before The 90 Days is out. It features the gorgeous 47-year old Rebecca and her 26-year old hubby Zied. He is from Tunisia whereas Rebecca is a resident of Clanton, Georgia. In the video, we can see Zied going out of control with anger. The reason behind the massive rage outburst is the revelation of the fact that Rebecca is still legally married to her third husband. to clear the air, let’s take a look at the exact situation.

90 Day Fiance: Before The 90 Days; The Couple’s Official Bio

The couple’s official for 90 Day Fiance: Before The 90 Days states that Rebecca has three kids and has also had three failed marriages. One of them includes with a Moroccan guy she brought to the US on a spousal visa. However, she is ready to put all of that behind and try once again.
Someone claiming to be Rebecca’s son posted a picture of himself, his baby and Rebecca, stating that she is going to be on 90 Day Fiance: Before The 90 Days to meet Zied. Even though the post is no longer there, there has been a couple of question and answer sessions.


When a commentator said that the guy looks selfish, the poster says that he is better than the Moroccan guy Rebecca married. He also takes interest in his life and asks about his son who was in the hospital for a while. He also revealed that even if Rebecca and the Moroccan guy are not together anymore, she hasn’t divorced him yet. The poster and Zied get along well. He also states that they are portraying Zied to be more selfish than he actually is. He and Rebecca love each other and get along great.

Before The 90 Days; Rebecca’s Marital History And Kids

About 20 years ago, Rebecca married her first husband and filed for divorce in 2006. They have three children together. Things stretched to 2014 when the judge gave her youngest minor child’s custody to her estranged husband and ordered her to pay child support in the form of $5200.
She married her second husband in 2009 and filed for a divorce in 2013. Within six months, her divorce was finalized. Precisely after 15 days of the finalization of her divorce, she married the Moroccan guy. The separated on 4th January 2018. Considering her history of failed relationships, it is hard to say whether this one will work out. However, if we follow what the person who claims to be her son has to say, things seem pretty promising for the new couple. Stay tuned for the premiere airing on Sunday, August 4 at 8/7c on TLC!