90 Day Fiance: Before The 90 Days star Ed seems to have a lot of efforts to make to win Rosemarie back after he asked her to get tested for STDs. Let’s take a look at how he goes about it in detail.

90 Day Fiance: Before The 90 Days; Ed and Rosemarie Get Into a Fight

After chatting online and falling in love, Ed decided to come down to the Philippines to meet Rosemarie. He also purchased a ring as he thought that she is the love of his life. One day over dinner, Ed ignited a massive fight when he asked his girlfriend to undergo a test for STD. Moreover, he also pressured her to open up about the father of her 4-year-old son Prince and some more of her past relationships. 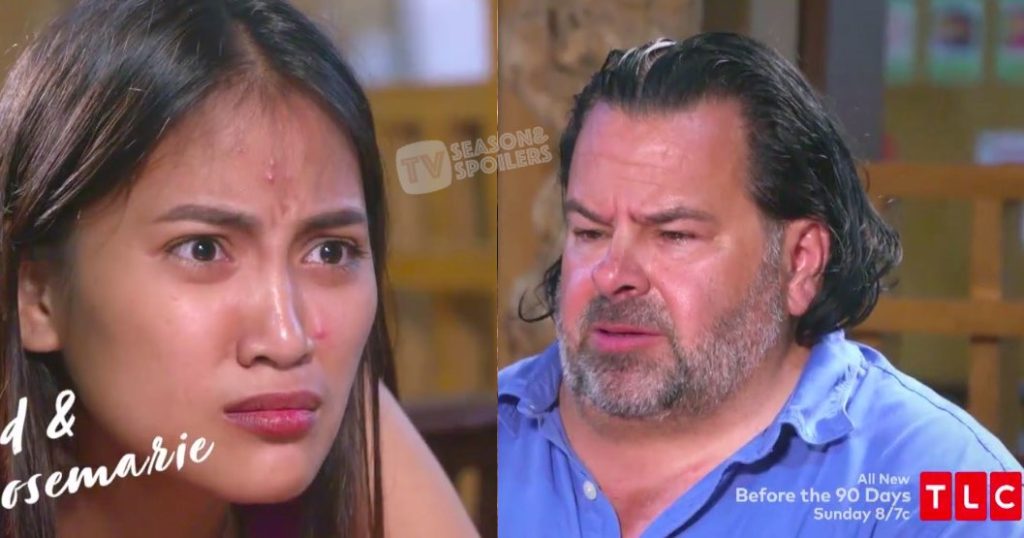 When Ed wouldn’t give up talking about the father of her son, Rosemarie told him that she doesn’t talk to him as he has his own family now. She took offense to the fact that Ed didn’t trust her, according to ETOnline. Rose also cleared the air about her past relationships stating that she has only two ex-boyfriends. In the end, she went alone in a cab to another hotel, away from Ed. Moreover, when the producers asked Ed what happened, he had no answer and went away without saying anything.

90 Day Fiance: Before The 90 Days; Ed No Longer Believes In Love

Ed said that he no longer believes in love. He felt like it’s over but isn’t ready to give up yet. Via text, he asked her to meet him in a cafe. He was hoping she would show up after an exclusive fight. Ed told the producers that he loves Rose and misses her. He said he is sorry and wanted to let her know that he will never ask those questions again. In fact, he knows what he wanted to know about her past.

When Ed sat down to discuss his journey, he said that his friends and loved ones had their reservations about Rosemarie. At one point he wasn’t in talking terms with his daughter Tiffany because of his relationship with someone younger than his daughter.

Ed said that no one understood how good he felt after being admired for almost 28 years. His daughter kept pointing out that Rose is even younger than her. Ed admitted to having made a complete fool of himself. He was not thinking about anyone else apart from himself and Rose.

Now, rumors about Rose being engaged are surfacing but it is still not clear who she is engaged to. Do you think Ed and Rosemarie made it through? Are they still together? Is she engaged to another guy? Let us know what you think about Rose and Ed’s fate together in the comments below.