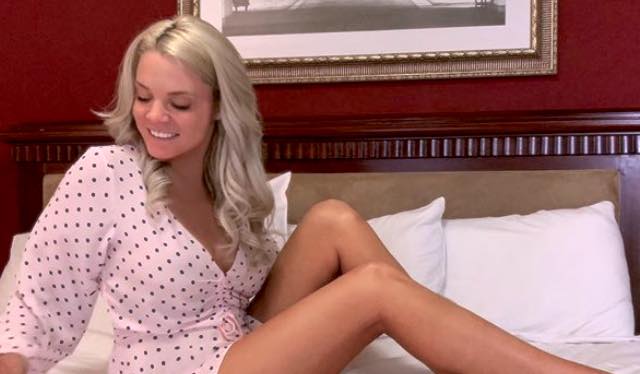 90 Day Fiance: Is Ashley Martson Getting Her Own Dating Show?

90 Day Fiance star Ashley has announced on Instagram about a Local Meet and Greet at, on September 13, 2019, at Blarneys in Mechanicsburg, at 11 PM. Talker of shits says on Instagram that she is just feeding the rumors stating the beginning of her own show. The Instagram post points it at Ashley and states that the contestants are going to be 18 this time. ‘Are you thrash? Win a date with Ash’ is the tagline of the post. Let’s take a look at what all this chaos is about.

90 Day Fiance: Thoughts On Ashley Getting Her Own Show

One of the biggest perks of being a reality TV star for so long is the exposure a person gets. No matter how you become famous. Even if the contestant getting all the fame has a huge hater base, the person is still going to be popular as hell. Most likely, people are going to continue to watch them. The same thing seems to be happening with Ashley Martson. She has her fair share of haters. Still, she is boasting around the possibility of her own show this time.

The reaction on the post doesn’t seem to be much positive. Fans are already full of all the drama Ashley and Jay have been created for the past few months. Most of them have realized that Ashley might not be as innocent as she seems to be. Moreover, one time, she has already been caught betraying the fans. When she announced that Jay and she have broken up, she didn’t call it quits. After the first cheating scandal, she filed for divorce. However, she gave Jay a second chance.
But on social media, Ashley continued to pretend that their relationship is over. Because of this, she lost many followers within a few hours of her being caught. Moreover, she made a huge fuss over her wedding pictures being leaked. It later turned out that Ashley and Jay leaked those and put the blame on Natalie, Ashley’s ex-best friend. Jay came live from the Instagram account that leaked the pictures by mistake and the fans caught them red-handed.
https://www.instagram.com/p/B0q0Nu3AjI7/?utm_source=ig_web_copy_link

When Jay was under the custody of the ICE, Poochie, Jay’s sister, made a lot of revelations about Ashley and her deeds. She mentioned that Ashley had been cheating on Jay as well. Moreover, she also lied about Jay being the only Jamaican guy she dated. She had had a Jamaican boyfriend before and was still in touch with him while seeing Jay. She also calls the barbershop incident a trap she laid for her brother Jay.
From all this, it is safe to assume that there are a lot of viewers who hate Ashley to the core. Do you think if a new show based on Ashley was to happen, will it be as popular as 90 Day Fiance? Is it likely to have a decent viewership? Let us know in the comments below.