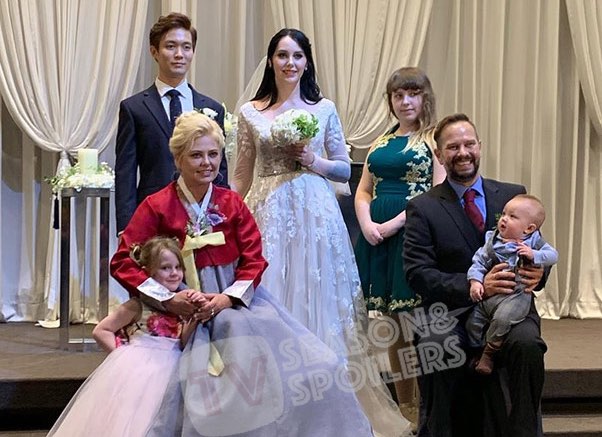 90 Day Fiance couple Deavan and Jihoon tied the knot soon after she arrived in South Korea. But she wanted her family to attend the formal ceremony. This weekend, she got what she wanted, and her family attended the ceremony. Jihoon looked sharp in a formal suit, and Deavan looked gorgeous in her traditional white gown.

As we can see in the wedding picture, Deavan’s sister Raven is standing by her side. Her dad, Steve, and mom Elicia are also present. We can also see Drascilla and little Taeyang. There aren’t many details about the ceremony. But we do have some shots of the crew working behind the scenes. And taking note of the fact that Jihoon and Deavan are married now, they qualify for other shows of the 90 Day Fiance franchise. We know that they are shooting for the next season. However, there is a possibility that they can also star on 90 Day Fiance: Happily Ever After.

What Do Fans Have To Say About Jihoon and Deavan’s Marriage?

Fans can’t get over how charming the couple looks in their wedding outfits. Most of them are praising Jihoon’s hairstyle. The common opinion is that it makes him look like a man and not a boy. One user also wondered whether Deavan dyes her hair dark to make her skin paler. Nevertheless, her hair beautifully complements her blue eyes.
Deavan and Jihoon’s journey hasn’t been as challenging as the other couples on 90 Day Fiance: The Other Way. Even though the language barrier and cultural differences were there, fortunately, Jihoon’s family never caused any problems. They have always been welcoming even if having a baby without wedlock was not common in their culture. Despite the differences and varying opinions, they not only accepted Deavan as their daughter-in-law, but they also welcomed Drascilla into their family.
Jihoon seems to love Deavan genuinely. Even though they are having financial issues, it never seemed like a dead end with this couple. They enjoy some beautiful family moments.

What Can We Expect In The New Season of 90 Day Fiance: The Other Way From This Couple?

https://www.instagram.com/p/B3276LynavK/?utm_source=ig_web_copy_link
There is always more to the story. Jihoon and Deavan have a simple, positive, yet interesting story. The couple can catch the attention of the viewers. Moreover, they are also among the top favorites of fans all over the world. Deavan and Jihoon’s story seems genuine and realistic.
But there are still some problems that the couple has to address. For instance, they have two kids to take care of. Deavan is in a new country and it’s going to take some time to find a good job. As for Jihoon, he doesn’t have a stable job yet. Drascilla can be difficult to handle at times.
Do you think they can have a happy ending? Let us know in the comments below. Stay tuned for more 90 Day Fiance