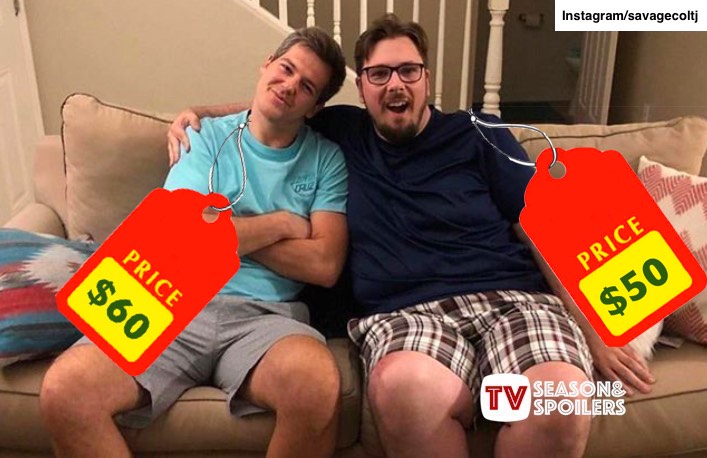 The biggest perk of being on a reality show is that the alums can gain a lot of exposure. Even though they might not always maintain a successful relationship with their partner, they brought on 90 Day Fiance. But they can certainly put fame to good use. For instance, earning some extra bucks! Eric Nichols, Larissa’s ex-boyfriend, seems to be using his fame quite appropriately. The interesting thing to note in his case is that he hasn’t even appeared on 90 Day Fiance! All he did was date a 90 Day Fiance alum and started charging for cameos. Let’s take a look at this in detail and the cameo rates of other reality TV stars.

Eric Nichols is technically not a reality TV star yet. But he has certainly dated the queen. However, dating Larissa is just responsible for part of his fame. After the breakup, he started hanging out with Colt and Mommie Debbie. After all, playing a little with the slot machine doesn’t sound boring now, does it? He is charging $60 for a cameo and users are trolling him for it. He is barely a sensation, and the fact that he is charging so high for a cameo is ridiculous according to viewers.

Known for his complicated relationship with Akinyi, Benjamin has been facing a hard time in Kenya. He has to pay a massive bride price for her hand in marriage. Ben has a son to take care of and is not very rich. Moreover, Akinyi is reluctant to be a mom for his son. He does cameos for $20.

Darcey Silva and drama go hand in hand. Be it messy relationships or drinking problem, Darcey has gained a lot of fame via reality TV. She has a difficult relationship with her sister. Moreover, her desperation for her new beau Tom is making the headlines. Her rate for cameos is $50.

Paola faced a lot of backlash when she refused to hand over her baby to Russ’s mom. Russ and Paola have been busy taking care of their newborn. But it seems that she has some spare time for cameos. Her rate for cameos is $60.

Tom Brooks has been the center of major controversies since the day the news of his fakery came out. He is accused of ripping pictures off the internet and posting them as his own. On the upside, these controversies have earned him a lot of fame. He does cameos for $60.

Corey has been the center of sympathy during the course of his relationship with Evelin. However, he has now broken up with her and is back in the States to spend quality time with his family. He does cameos for $35.

Deavan has recently given birth to little Taeyang and is adjusting to her new life in Korea. She is clearly not satisfied with her living conditions. Moreover, the couple has been facing a lot of financial crisis since Jihoon doesn’t have a stable job. Her rate for cameos is $40.

Jennifer is the Columbian beauty who is involved in a romantic relationship with Tim Malcolm. It appears like she is settling for him just because he is a family man. However, the reality star is available for cameos. Her rate for cameos is $40.

Rebecca has been stirring the 90 Day Fiance plot with her secrets one after the other. The fact that she was skeptic of Zied’s source of income seems ironic now, that she has huge secrets of her own. Her rate for cameos is $35.

When it comes to Nicole, the criticisms never end. She seems like the epitome of hopefulness. Her long-distance relationship with Azan has been a hot topic among fans for more than 2 years now. Her rate for cameos is $50.

Evelin is evil in most fans’ eyes. According to viewers, her treatment of Corey was totally unreasonable, and this is the reason why she receives a lot of hate. However, good or bad, fame is fame, and Evelin knows how to use it to her advantage. Her rate for cameos is $25.

Colt Johnson’s fame is a bit complicated. Larissa’s haters seem to take his side. On the other hand, those on team Larissa hate his guts. He is famous for his overly close relationship with his mother. He does cameos for $50.

Zied and Rebecca have been one of the couples who are popular for their over-the-top cultural gap. They have tried to cope with all the differences despite so many secrets. It seems that they are still together. He does cameos for $25.

Even though David and Annie are not a part of the 90 Day Fiance franchise anymore, they have their own YouTube channel in which they share their life. They give us serious couple goals as they are always gushing over each other. They charge $ 37 for a cameo.

Tim Malcolm seems to be facing a really hard time. Viewers and other 90 Day Fiance alums have been calling him out for not being masculine enough. In fact, Dean and Tarik called him a transgender which was extremely offensive. His cameo rate is $39.

We have been saving the best for the last! The queen has grabbed the majority of 90 Day Fiance fame and has been the most discussed contestant ever. She was a sensation when she was with Colt and Larissa created a stir when she broke up with Eric. She charges $55 for a cameo.