Darcey and Stacey might soon start to get more screen time on TLC than other 90 Day Fiance stars. According to rumors, the Silva sisters are going to star in their own spinoff series. Let’s take a look at this in detail.

90 Day Fiance: Darcey and Stacey Get Their Own Spin-Off Show

Dacey has been one of the most dramatic 90 Day fiance cast members to ever star on the franchise. Whether she was in a tumulous relationship with Jesse Meester or the British hunk Tom Brooks, she never failed to get the spotlight on her. 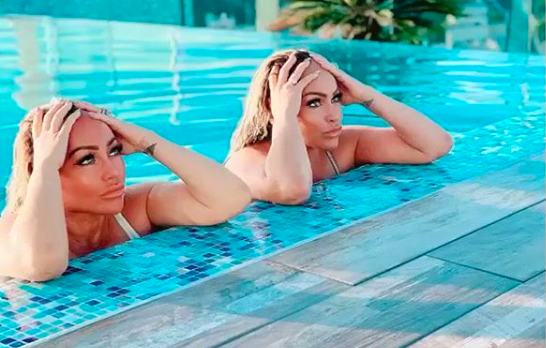 Even though Darcey has no shortage of haters, she has gained quite a reputation and viewership. Of course, her sister soon followed her footsteps and appeared on 90 Day Fiance: Before The 90 Days when they went on an outing as a double date. She even gaslighted Darcey and accused her of being jealous of her relationship.

New Series Featuring Darcey’s Dramatic Twin Along With Her

Darcey and Stacey are going to come together to star on the speculated new spinoff. And we know what that means! A really strong overdose of intense drama. Even though Darcey has not given any confirmation on the same, she revealed a while back that she is working on a big project in LA.

Even though she has been teasing on working something new for a while, most fans assumed that it was something outside the 90 Day Fiance arena.

After creating a lot of buzz with her ex-boyfriend Jesse Meester on the show, we got to see an explosive breakup full of accusations. Shortly after that, in another season, Darcey came with the British guy Tom Brooks. During her time with Tom, she appeared to be an insecure, needy, and clingy girlfriend. Not only that, there is another guy Michael who she is speculated to have cheated on Tom with.

As for Stacey, she was with Florian, her foreign boyfriend when she starred on the 90 Day Fiance franchise. However, later, he seemed to have cheated on her with some Canadian girl. So, it seems like the Silva sisters are back to square one when it comes to love life. Both have recently come out of unsuccessful relationships.

Darcey and Stacey decided to do something big as reality TV stars but miserably failed. They filmed for a show called The Twin Life. The show featured the attempts of the sisters trying to make it to the entertainment industry while fulfilling their roles as moms and wives. It also featured their ex-husbands.

But the pilot never aired and the attempt failed even before they could start their journey as reality TV stars. It seems like the sisters are ready to rock it this time if the news of their own spinoff is true.