It has been quite some time people have been making 90 Day Fiance star Nicole realize that she is foolish for even thinking that she has a future with Azan. We have seen the couple on 90 Day Fiance. From that, the audience can easily deduce that the couple doesn’t get along well. Nicole has even cheated on Azan once. However, from most of it, it is safe to assume that he doesn’t treat Nicole the way any man should treat a woman. It seems like she is the only one making any efforts in the relationship. She has even given him $6000 to open a store in Morrocco.

Now, you might say that this isn’t new as Nicole has been defending Azan for a long time. Even when the whole world is against him, she is there defending all of his actions. She points out that what viewers know of her and Azan’s relationship is only via 90 Day Fiance. She mentions that the show has portrayed a part of her romantic life. Most people are judging her and calling Nicole a bad mother. She explains that she even left her daughter in another country. However, she had people protecting her and taking care of her. 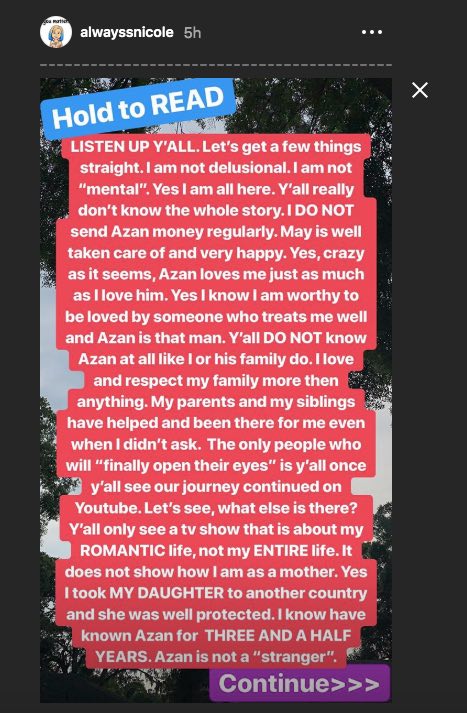 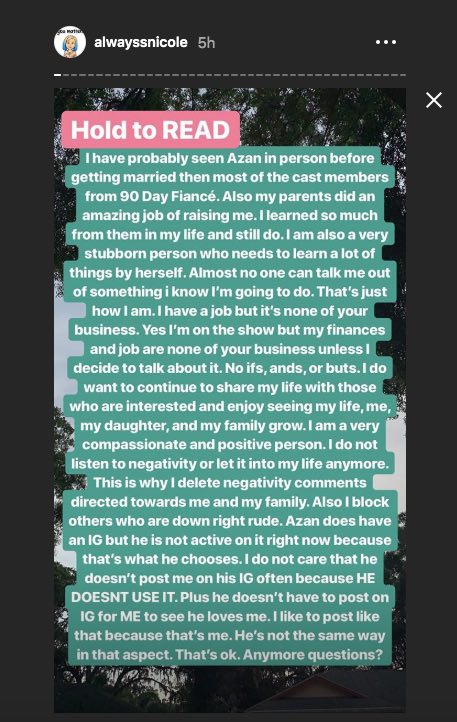 Her parents and siblings have been there for her and she is not alone. Nicole says that she has known Azan for three and a half years and that he is not a stranger anymore. She explains that she has seen Azan in person before deciding to get married to him. Her parents have taught her many things and Nicole is grateful to them. However, she is stubborn and it is almost impossible to talk her out of something she knows she is going to do.

Also, she bluntly mentions that her finances and job are none of anybody else’s business. Azan is rarely seen posting pictures of them before. However, Nicole says that he is not into social media and stuff. And it’s not necessary for him to post pictures to show that he loves her. 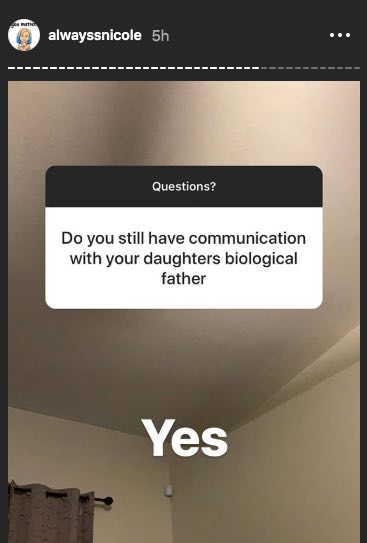 After stating that she is a positive and compassionate person, Nicole asks fans if they have any questions. Of course, viewers had queries to clarify. One follower asked Nicole whether she is still in touch with May’s biological father. She replies yes, which is a shock to those who think that she doesn’t speak to him anymore. Another fan asks whether Azan is allowed to apply for the visa again. Nicole mentions that even if he is allowed to file for the visa again, he might get rejected as this is what generally happens if you were denied once.

The couple has decided to apply for a spousal visa after they tie the knot. Someone from the audience also jokingly questioned, ’90 Day Fiance or 90 Year Fiance.’ Nicole replied that their story is one of a kind and hard to digest.