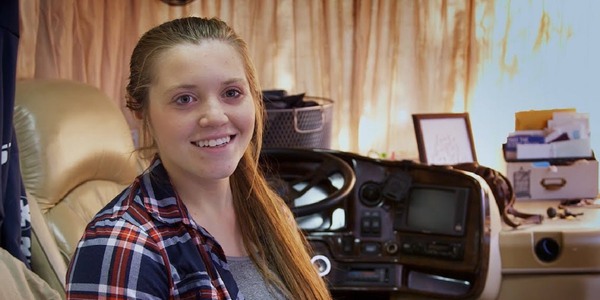 Counting On star Joy-Anna and Austin Forsyth welcomed their second child, Evelyn, recently. Now the rumors are rife that they’re expecting their third! The fans speculate that the couple might be all set to bring in their third just nine weeks after welcoming their second. However, Joy-Anna is not taking any of this and she took a moment to set the record all straight!

Joy-Anna shared a bunch of heartwarming photos of her and Forsyth from a family photo shoot. This post drew a lot of attention and a mixed bag of reactions. She captioned the post with words from Austin’s mother. She wrote that while she was dating him, his mother told her that she only needs a companion. Joy-Anna added to the caption that she would love to Austin’s companion, any day. The sweet pictures also featured their son and newborn daughter.

The fans took to the comments section to share their thoughts about this update. While some of them expressed adoration, others were quite surprised. One of them commented that the pictures were ‘beautiful.’ However, a fan exclaimed if Joy was pregnant again! The mom of two clapped back at the one reading between the lines. She bluntly responded by saying that she is holding a baby of merely nine weeks! Another fan noted that her hands were still puffy, to which she said, her hands were swollen during pregnancy. They also observed that Joy didn’t wear her wedding ring. She replied that she hasn’t put that back on.

Joy-Anna Dealing With Naysayers In Her Style!

Right after welcoming Evelyn, Both Joy-Anna and Austin have had to deal with naysayers. Just earlier this month, someone criticized the moma for her manner of cradling the newborn. In response to her October 5 post, fans were afraid that Joy might drop the baby because she was carrying it wrongly. However, Joy-Anna thanked them for showing concern and cleared the air in her own way. Her other fans came forth defending her and said that a mother never lets anything happen to her children.

Joy-Anna and Austin announced the expected arrival of their second baby in March. The two underwent the pain of a miscarriage last year. The experience left them shaken and broken. However, as they said, they kept their faith in God and let themselves sail through the odds.