Little People, Big World star Tori Roloff is pregnant again, and their family will finally be complete! Zach Roloff and her wife are expecting their second child, and they couldn’t be happier. Their son Jackson is going to be a big brother. The couple also mentioned on social media that it’s going to be a girl. The little girl is due in November, and the family’s excitement on the arrival of the precious guest is beyond joyous!

The Roloff family was quick in congratulating the couple publically. “Grandpa is hitting the lotto!!” wrote Matt Roloff. Jeremy’s wife Audrey Roloff also congratulated the couple. She also wrote that it would be amazing when the baby hags out with her own toddler! She is the mother of the one-year-old Ember. She can’t wait for the girls to hang out together. Audrey expressed her happiness for Tori with many heart and heart eyed emojis. 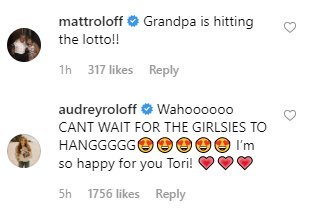 The couple also shared a few images. One of them included Jackson wearing a big brother T-shirt. The other picture featured Tori and Zach with Tori having an ultrasound. Tori also expressed her gratitude for fans’ support.

Zach, Tori and Jackson are still on the show ‘Little People, Big World.’ However, Audrey and Jeremy left as they wanted to pursue their own interests. Tori and Zach have moved into their new home. Jeremy did make a brief appearance on the show when he was helping them make the shift.

Audrey and Jeremy announced that they will leave the show in 2018. However, they have also assured that they will keep fans updated via social media. But one thing is for certain. They won’t be able to last on the show as the couple has already undertaken previous projects. One of those projects is a book named A Love Letter Life written by Audrey. She has recently concluded a tour promoting their book. She also spent a week without her daughter Ember in doing so.

Happy birthday to our sweet (not so) baby J! I can not believe I have spent 2 years of my life with this kid. It goes by way too fast. Jackson you are so confident and I have loved watching your personality develop. You are becoming so silly and always up for a good time! You are so easy going and smart. I pray that you continue to face life head on the way you do and continue to bring smiles to everyone’s faces effortlessly. I love you so much Jackson! Happy birthday! Can’t wait to see what is ahead this year! thank you to everyone who came to celebrate with us and passed along sweet notes to me! 💙 #babyjroloff #zandtpartyofthree

While the couple was busy with the promotion of Audrey’s book, they had to leave Ember behind. She mentioned in an Instagram post that after a while she began to feel guilty. But a friend of hers made her realize that parents should leave children alone for some stretches of time. This makes them learn that they can be safe with the people who love them even when their parents are around. It was then Audrey started to consider this time apart as a gift to Ember and her independence.

In the meantime, Tori and Zach are struggling with selling their own house. They are celebrating their move but have many responsibilities to cater to. As for Jackson, he loves the crew and enjoys on the set. How do you think the arrival of the baby girl will impact the Roloff family? Let us know in the comments below.