It seems like Sarah has some spiteful words to say for Michael and “Love After Lockup” producers. Michael has strung along Sarah and Megan. He got married to Sarah while in prison, and that was before Megan and Michael got together. In the present situation, Michael is finding it more and more challenging to keep juggling between the two women.

The most discussed storyline of the current season of Love After Lockup has been the love triangle between Michael, Sarah, and Megan. When Megan lost her virginity to Michael, Sarah was totally unaware of his whereabouts. He stopped answering her phone and completely blew her off. It was when Megan and Michael were at Niagra Falls did Sarah got to know.

On the latest episode of Love After Lockup, Megan commented that she and Michael are just like any other regular couple. However, she couldn’t anticipate what was about to happen. Sarah dropped him a message saying that his probation officer mentioned Michael staying out past the curfew. Although what Sarah said afterwards displays that something is not adding up quite yet.

Love After Lockup: Sarah Firing Back In The Series Of Tweets

Sarah called out the producers of the show and Michael on social media for making the plot for a new drama. She accuses Michael of using Sarah to break it off with Megan. Sarah also said that he wanted the blame placed on her for the breakup. By taking the whole situation a step further, Sarah cleared the air by saying that she was completely over the show. She allegedly stated that she never sent any of these texts. 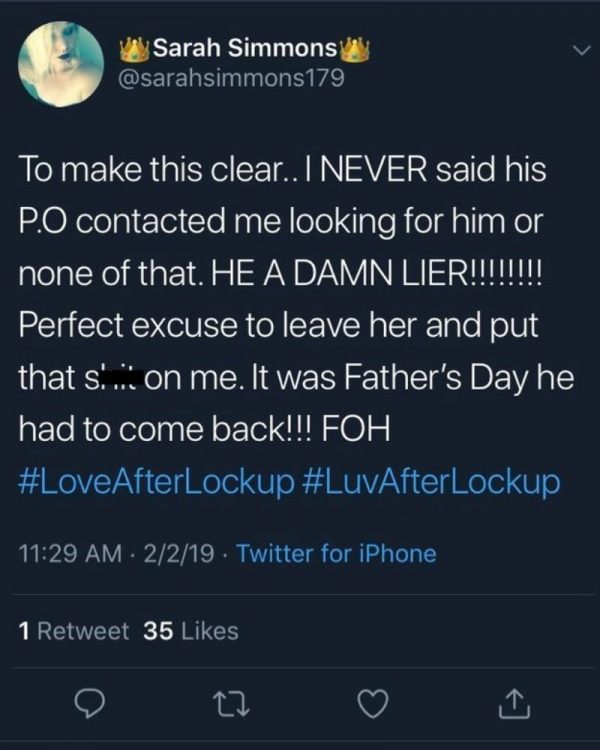 If we were to believe what Sarah was saying, the producers of the show are definitely up to something. Maybe the entire plot of Michael’s payroll is to set her up for something she isn’t involved in.

Her response ends with a firm accusation involving Michael and the show’s producers. They are making an attempt for drumming up the story. The planning going on behind the scenes is still not clear. But if Sarah isn’t lying, the plot is sure to stir up!

What’s Going To Happen Next?

Currently, both the women in the latest season of Love After Lockup have no idea that Michael is stringing them along. Sarah mentioned that the audience is going to witness how she finds out about Michael’s juggling the two women on the show. Such storylines definitely involve a lot of drama no matter what the scenario is.

The contestants already come with a not-so-clean criminal record and considerable baggage. Now, top it up with infidelity and love triangles. Imagine how much the plot will thicken. The entire season has been building up to the exact storyline we are about to see. It would be interesting to watch how the story unfolds from here.

Is Sahar telling the truth? Let us know what you think in the comments below.

There has been no shortage of shocking moments on #LoveAfterLockup! 😮 pic.twitter.com/GNIug9u3Jb