My 600 Lb Life’s new member Dominic Hernandez is facing the crisis of housing isolation and health issues. His weight crosses 600 Lbs and he lives with his 44-year-old brother outside his van. We can see James and Dominic cramped up and sleeping. He never thought that his life would end up like this. Let’s take a detailed look at this.

My 600 Lb Life: Dominic Feels Like His Life Is a Nightmare

Dominic thinks that his life is a mess right now in many different ways. But he describes his health and living situation his biggest struggles right now. He also feels like his world has fallen apart. Dominic reveals that his size makes it harder to fit into spaces and this makes his situation even harder.

Dominic wakes up and tells James that his sleep was somewhat painful. He had to adjust himself the entire time. He also stated that he wanted to take a shower as it has been a while. James then asked him whether they have enough money for a room and he says yes. But Dominic quickly changes the topic and said that he should go and eat something first. 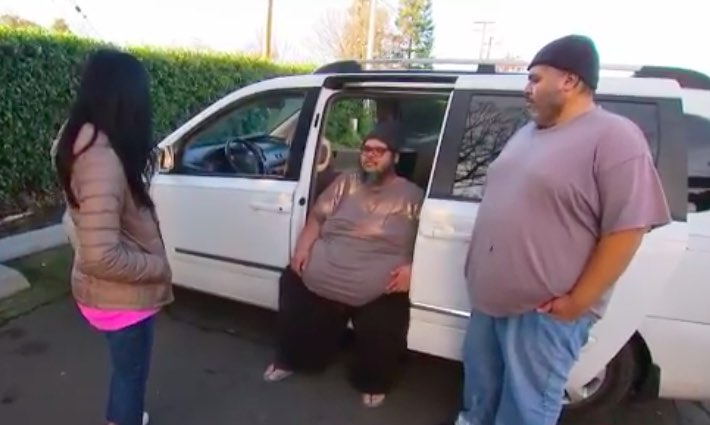 We can see that Dominic faces a lot of difficulty in getting out of the car. Moreover, living in a van on the streets is risky. He is constantly worried about whether the cops might tell them to leave. There are other addicts and homeless people around too.

My 600 Lb Life: Dominic Opens Up About How Food Helps Him

According to Dominic, food helps him forget about all his problems. Well, it won’t be an overstatement to say that his life is indeed very hard. Living in a van struggling with a major health issue can be extremely challenging.

Most of the time, his life revolves around eating. We can see Dominic ordering six bacon egg & cheese biscuits, two triple griddles, six hash browns, three “big breakfasts,” and a chocolate shake with whipped cream from McDonald’s. In the next scene, he looked at James to confirm whether he has ordered enough for the two of them.

Dominic and his brother are homeless, but they're still determined to do what it takes to meet with Dr. Now and turn their lives around. #My600lbLife starts now! pic.twitter.com/GhmAHOGsDT

Dr. Now has turned many lives around for good. Obese people who have lost all hope from their lives have come out to live better. In other words, it has given them a new life. But the production company of My 600 Lb Life is in some serious legal trouble. LB Bonner’s family along with five other My 600 Lb Life contestants have filed a lawsuit against Megalomedia.

The reason behind the lawsuits were unpaid medical bills and staging fake scenes for more drama. The company promised the reality TV stars that they will pay all their medical bills. According to the allegations, they didn’t live up to the promises. Do you think Dominic’s life will take a new turn as he stars on My 600 Lb Life? Let us know what you think in the comments below.