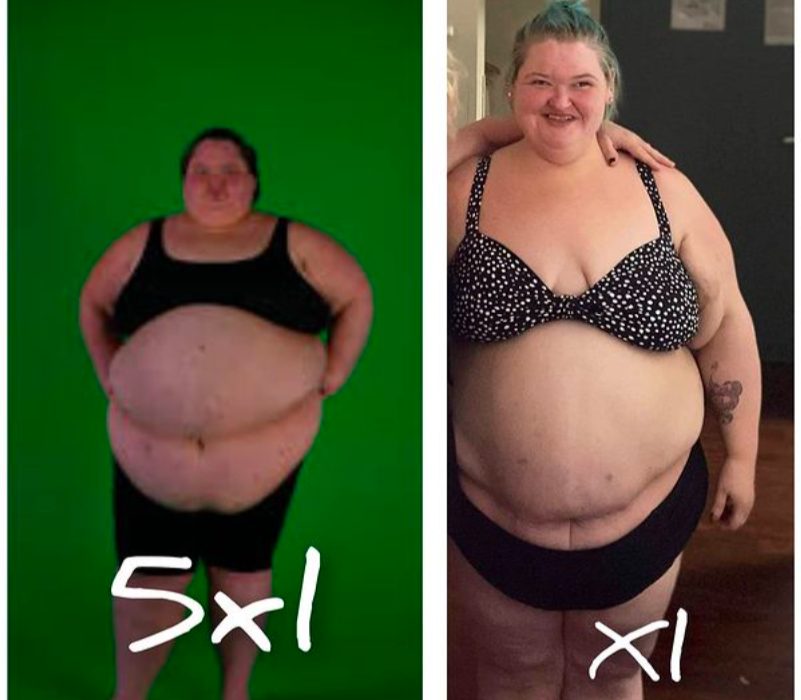 Amy Slaton’s journey on TLC’s popular show has been commendable. She started at a whopping 400 pounds and went on to lose chunks of weight off her body. Later on, she became eligible for weight loss surgery, after which she didn’t lose her spirit and continued to work on herself and put up with a strict diet. In fact, the 33-year-old celebrity also achieved her life-long goal of starting a family after she gave birth to her first baby. As of now, Amy is still trying to be more healthy and has finally reached down to an XL size compared to her 5XL initial size. Here are some adorable before and after pictures of the fan-favorite TV star.

The popular Kentucky native has inspired millions of TLC viewers. Her vast journey started back with the first season of 1000 Lb Sisters. As of today, she has lost more pounds than she or her fans ever expected. Amy has been showing off her new look for a while now. Only recently, she revealed that she was able to fit into an XL (Extra large) size top, which was new to her since her schooling days. While taking care of her newborn, the celebrity mom shed all her baby weight as well. Fans could notice significant differences in her recent pictures as compared to the old ones.

Amy and her husband took their baby boy for his first trip to the pool. She uploaded plenty of adorable pictures with her family and friends as her little one enjoyed some time in the water. When fans started noticing that she has lost more weight, the TV star decided to address their curiosity. Amy then posted a comparison photo for her current self and how she looked when she started the show. The pictures mention that she initially was a 5XL size. However, in the latest pool pictures, the mommy has dropped down to a surprising XL size. The caption of this social media post says, “Alot has changed.”

1000 Lb Sisters: Fans Are Proud Of Amy, Shower Her With Compliments

Amy Slaton has a massive fan-following today, and rightfully so. She deserves to be commended for her growth and is still motivated to make more progress. The recent before and after pictures of her were inspiring, and fans were overwhelmed to look at them. Moreover, her followers showered her with tons of compliments and were immensely happy for her. People wrote that they are proud of her. Moreover, they also pointed out that the 1000 Lb Sisters star looks genuinely happy with her new self. While there were some negative comments also, the majority of her followers showed their support. Well, we hope that Tammy gets on the right track, too, just like her sister.

What do you think of Amy’s new look? Tell us in the comment section and keep coming back for more wholesome 1000 Lb Sisters news.