‘Sister Wives’: “It is impossible to live without failing at something unless you live so cautiously that you might as well not have lived at all – in which case, you fail by default.” This is a famous quote by J.K Rowling that Meri Brown recently posted on her Instagram handle. Just like the rest of the world, the Brown family is isolating. Let’s take a look at what’s going on with Meri and what she is implying.

According to fans, Kody is most likely in quarantine with his fourth wife Robyn Brown. Apparently, she might be back to the favorite spot once again. Meri posted the quote the very next day when everyone believed that Kody is off living in isolation with Robyn, leaving Meri alone. 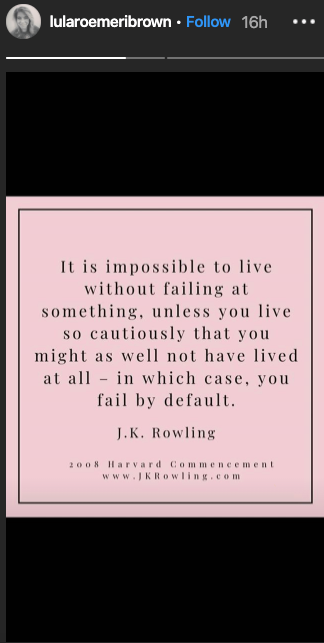 Fans have also been pointing out that the other wives have also been posting pictures without him. One fan believed that they might use the excuse that Robyn’s kids are little and they might need both parents to help them during the quarantine. However, the fan also pointed out that all he wants is to spend two weeks straight with Robyn.

Sister Wives: Meri Uploaded a Solo Shot In The Snow

Meri also uploaded a picture of herself standing in the snow. She said that her original plan was to hand out with like-minded people from Lularoe. But since the prevailing circumstances won’t allow that, she is enjoying the beauty of nature alone. Even though her plans changed, she is okay with it. She spent the last week in her house getting some projects done and watching the beautiful snowfall. Meri also stated that she connected with a lot of friends over social media.

Sister Wives: What Could Meri Mean By ‘Impossible to live without failing?’

From her J.K Rowling quote, we can say that she might be feeling like a failure. Considering that she is likely self-isolating alone, it can certainly bring some bottled up feelings. Kody hasn’t treated her well since he got married to Robyn. When the couple got legally divorced, their relationship seemed to tarnish. And they have never remained the same ever since. Plus, Meri’s affair, more so, catfish made things worse.

Another meaning can be she has been trying to live so cautiously that her life became a failure by default. She might even be implying that Meri has not lived her life at all because of the fear of breaking her family. Even though the Browns have faced a lot of problems over the past few years, none of them has walked away from the family.

According to most fans, Mariah Brown, Meri’s only daughter doesn’t treat her well. Speaking of mistreatment, Kody doesn’t leave any stones unturned in this area. So, there is a chance Meri might be feeling like a failure. What do you think? Let us know in the comments below.