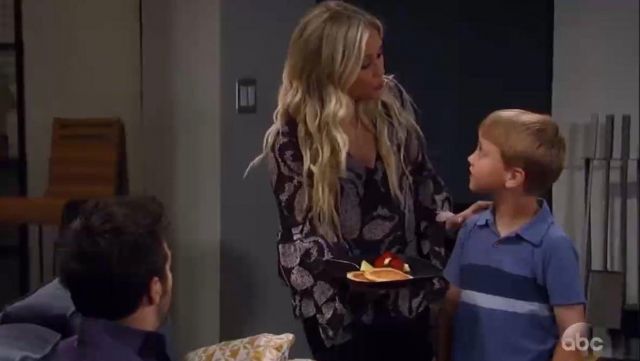 According to General Hospital, one of the famous soap opera stars has some good news for the fans. From 2005-2013, Julie Berman’s played the role of Lulu. As most of the viewers will agree, she did a fantastic job and gave the role complete justice. During her tenure on the show, she contributed quite a lot to increase the viewership.
Anyhow, the best thing about GH fans is their loyalty. Even after characters depart from the show, fanatics are always interested in what goes on in their life even after they are not on the screen anymore. Julie Berman’s life has certainly been super busy. She recently took to Instagram to flaunt a new addition to her adorable family.

Former GH Star Welcoming a New Addition To The Family

On February 18th, Julie Berman and her husband welcomed a baby boy. Asher Dean is obviously bringing loads of joy to his parents. With full hearts, the couple is more than happy to let the fans revel in their joy. She captioned a series of pictures displaying her and her hubby’s journey while she was pregnant. The caption said “Surprise!” The journey of pregnancy and childbirth can certainly be difficult. But Julie Berman certainly made the most out of her time! She is a classic example of the glass half full attitude.

When characters leave a daily soap, their career comes in danger. This is a general observation but it’s certainly not true in Julie Berman’s case. If you are thinking that Julie’s career took a hit after she left General Hospital, you are sadly mistaken. After leaving GH, she had some impressive gigs in major TV shows and movies. Jane the Virgin, Gilmore Girls: A Year in the Life revival, Chicago Med, and Casual are some of the popular TV series featuring Julie. Her latest role was in a 2017 release comedy movie named Valley of the Moon.

After successfully portraying the role of different characters in amazing TV shows, she has proved her talent as an actress. Now its time to see how she fares in real life taking care of her cute newborn son.
What do you think? Do fans have a chance to see Julie Berman again on General Hospital? Emme Rylan has renewed her contract with GH recently. So, we can say with confidence that the producers have got Lulu’s roled covered. But since it’s a soap opera, there are always chances of a fan-favorite returning to the screen. Same goes for Julie. Even if Emme Rylan is set for portraying Lulu, Julie can always return as a new character to rock the screen.
Meanwhile, Lulu’s character has a lot of drama coming in her way to deal with. Stay tuned to TV Season Spoilers for latest General Hospital

Spoilers and updates. Also, let us know what you think of Julie Berman’s return in the comments below.