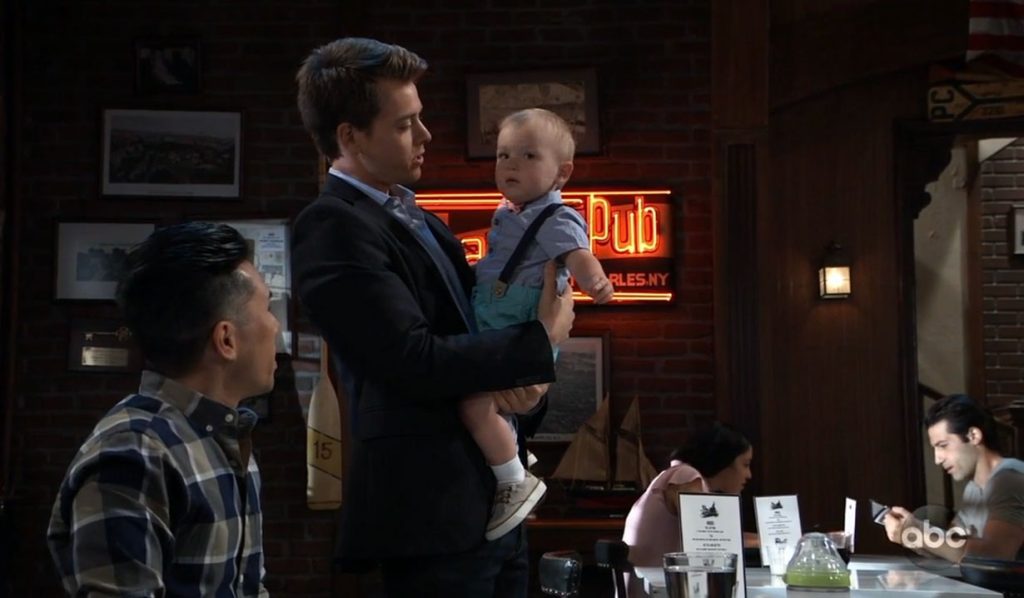 General Hospital Spoilers For The Week Of February 24: Michael To Be Over The Moon

General Hospital Spoilers for the week of February 24 reveal that this week will be full of emotions. While this unveiling of Baby Wiley’s truth brings happiness for someone, it will bring confrontation and loss to others. The coming week will just not have the baby Wiley storyline but also build other storylines. There’s love blooming, meetings on cards, and also confiding the problems. It all just looks very promising. Here are all the details on what all could happen in the show

Michael To Be Over The Moon

General Hospital spoilers reveal that the week to come will be joyful for Michael. He has very recently found out that his son is alive and what could be better news? He will spend a whole day with his kid. This will only take the man over the moon. He loved Wiley, and finding out the child is their son will only add up to more happiness.

Across Port Charles, spoilers indicate that Monica will receive some good news soon. What is the news? Will she know that another little Quartermaine is out there in the town? This is a piece of good news that she will whole-heartedly welcome. The woman has lost a lot many things recently and the news that she a great-grandmother will give her some happiness. Other teasers reveal that Josslyn will also get some news. Is it about her being an aunt? We will have to wait and watch to know more about that.

Nelle and Carly To Get Toe-To-Toe

It looks like Nelle will also face the after-effects of all the baby Wiley revelation. She might even get toe-to-toe with Carly at some point in the week to come. Other teasers hint that Carly will warn someone. The question is, who is it. There are many chances that it could either be Nelle or Brad.
Along with that, teasers hint that something will shock Carly. What could that be? Tell us what do think in the comments.

General Hospital spoilers hint that Baby Wiley’s drama is not over yet. Teasers of the show reveal that Sam will go on and confront Julian in the forthcoming week. She will even unleash some fury on the man. If she comes to know that Brad knew about all that Brad did, Sam will share a piece of her mind with him and his role in the whole situation.

Nikolas To Confide into Liz

General Hospital spoilers for the week of February 24 hint that Nikolas will go on to confide in Liz. What could be this about? Does it have something to do with the marital arrangement he is into with Ava? Or is it all about the codicil drama? It looks like he will tell his BFF everything about it. How will Franco react to all of this?

Laura and Jordan are set to meet in the days to come. The Port Charles’ chief will tell town’s mayor about everything thats going on in the city. It sounds like its all business here. Although, it could even have to do with Laura trying to clean all Port Charles streets.

Love amidst All The Drama

There’s a lot of drama happening in Port Charles this week. Amidst all this drama, some love may take place too. Cam and Trina might go on their first official date this week. It seems like Cam is ready to put all his feelings regarding Josslyn behind himself and move forward. The two, that is, Cam and Trina, will surely make an adorable couple.

General Hospital Spoilers: What Will Change Between Sasha And Michael?

Baby Wiley’s truth is finally out this week, and this will, for sure, affect how people see each other and their relationships. Now that Willow knows that Wiley is her and Michael’s son, what will she do? Will the way she sees Michael change? Also, how will all this change Michael and Sasha’s relationship? General Hospital spoilers reveal that owing to all this; Willow will do something that will shock Michael. Will she offer to take the job of Wiley’s Nanny? Or maybe something more. Moving forward, Sasha will do something that will be in the best interest of her own self.