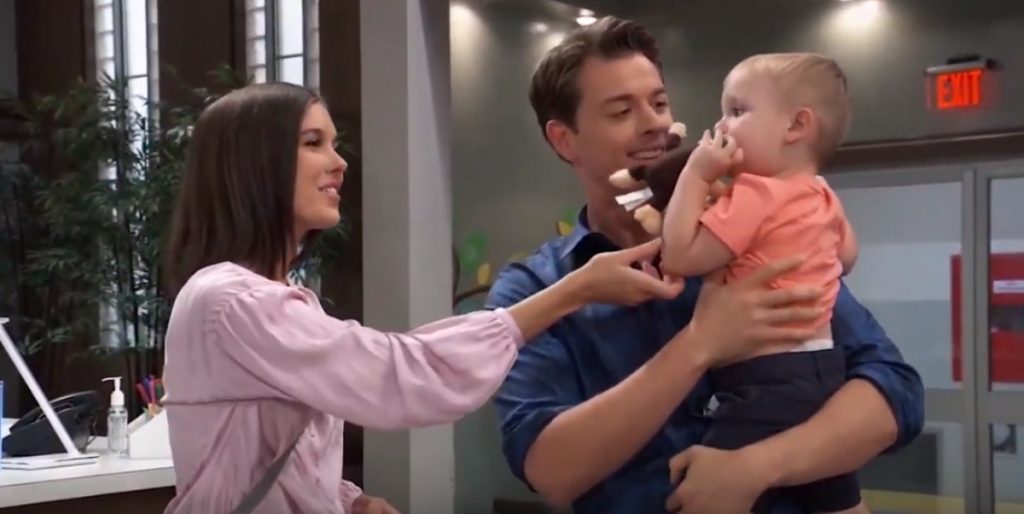 General Hospital viewers know that Willow and Michael have been trying to keep the truth about their love hidden. However, they might get busted soon, all courtesy to baby Wiley who is fast growing. General Hospital spoilers suggest that Wiley has started speaking and now has more words in his vocabulary. So, he might just tell everyone the secret his mommy and daddy are trying to hide. What will all happen? Keep reading to find out-

Michael And Willow Are In Love

General Hospital viewers know that what started as a marriage of convenience has turned into love. Willow and Michael had got married to save Wiley from Nelle. However, soon after their marriage, they started liking each other. While they are now divorced, they are in love with each other.

Willow and Michael were only dreaming of a future together when a sick Chase asked Willow to marry him. Willow and Michael thought that this was Chase’s deathbed wish. So, Willow got married to him. However, now, Chase has started recovering, all thanks to Finn. So, Michael and Willow have to eventually hide their truth, because they can’t risk Chase’s life.

With Chase on his road to recovery, Michael and Willow’s relationship has become really complicated. They hardly get any time with each other. The only time they can spend together is when they are co-parenting Wiley. Right now, Chase is living at the gatehouse along with Willow and Wiley. So, Michael has to meet Willow only when Chase is at his therapy sessions.

General Hospital spoilers tease that Michael and Willow might meet soon when Chase is away. It might be perfect that they would assume that Wiley is asleep or maybe somewhere else. So, they might take this time to discuss their personal and intimate things. But when this happens, Wiley might hear them. Or it is also possible that he might see Willow and Michael kissing.

Will history repeat itself? It looks like so. General Hospital viewers would recall that Wiley had repeated everything that Nina had said to him about Willow not being his mother. Now Wiley has grown up even more. He has more words in his vocabulary. Not just that, small kids tend to repeat a lot of things they hear and see. So, it is possible that little Wiley might witness or hear something that Willow and Michael could be talking about, and he might start repeating it. If Chase hears that, he might realize what is happening, and Michael and Willow might get busted.

If that happens, Chase will indeed be heartbroken. He is dreaming of a future with Willow as his wife, and coming to know this truth will burst his bubble. We will have to wait to see how this story pans out. Will Willow and Michael’s truth come out? It is possible. Tvseasonspoilers.com will keep you updated with all the news about General Hospital as it surfaces. So, make sure you tune in and enjoy the action.