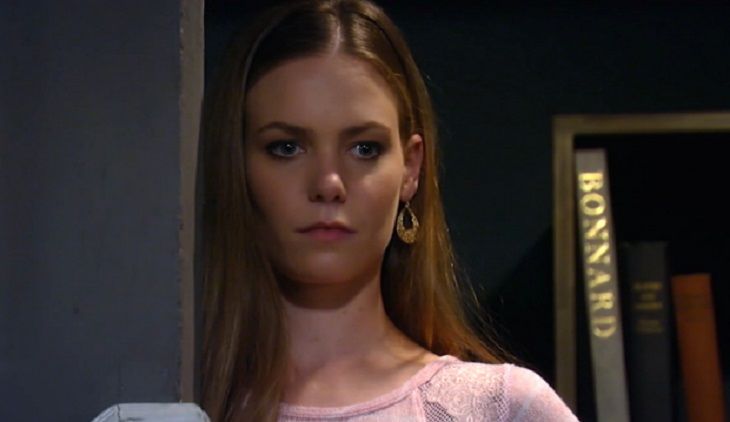 The latest General Hospital two weekly spoilers suggest that Nina will come to know about Carly and Jax’s involvement in covering up Nelle’s death. However, she will assume that the two of them had actually killed her daughter. So, she will be out for revenge. Then, Sonny is presumably dead. So, there will be a memorial service for the mob. Everything will come together for that. What more is happening? Keep reading to find out-

Spoilers For The Week of February 15-19

General Hospital spoilers for the week of February 15-19 reveal that Nina will overhear Carly and have her own conclusions. Then the memorial service will happen. Willow will decide to give Michael and Sasha the space they need Nina will put her revenge plan in motion. Should Carly start to worry? Spoilers suggest that it is possible Sonny might be coming back to Port Charles, and Valentine’s day celebration will bring in more drama. Here is everything to know about all the things happening in Port Charles-

The General Hospital spoilers for the week of February 15-19 reveal that Nina Reeves will overhear Carly Corinthos as they talk about the night Nelle Benson died. Nina will quickly understand that Carly was with Nelle when she fell off the cliff.

As Carly speaks more about the night, Nina will come to know that it was Jasper “Jax” Jacks’ idea to cover up the events of the night. Based on what she has heard, Nina will conclude that Carly had killed Nelle and Jax helped her cover that whole thing up. Nina will be furious about it but will hold off on confronting the two of them.

General Hospital viewers are aware that everyone in the town has presumed Sonny’s death. So, Sonny Corinthos’ memorial service is coming up in the week. Viewers will get to hear sweet speeches from the whole Corinthos clan, including Michael, Kristina, and even Carly. This will be a very emotional segment of the upcoming week.

Willow and Michael recently spent some close moments. However, when this Sonny Memorial service happens, Willow will step back. She will sense that Michael and Sasha could use some alone time. So, she will leave. However, she will take up on Michael’s offer to move into Quartermaine’s house so that she could keep an eye on her plan. It will be very interesting to see if the temptation strikes Michael and Willow in the way.

Nina’s Revenge Plan Is In Motion

Coming back to Nina, she will come back in the mainstream around Sonny’s burial. She will refuse to let go of what happened and make sure that Carly and Jax pay for what they did to Nelle. Spoilers suggest that Nina will push Jordan Ashford to get justice for Nelle. So, it looks like Pennsylvania authorities will re-open the investigation soon. On the other hand, Carly will go on to see Diane Mille make sure she is safe.

Is Sonny Coming Back?

Spoilers suggest that Mike (Sonny) will be accused of some robberies soon. So, The Tan-O, a state trooper, will sneak a mug out that has Sonny’s fingerprints on it. If the cops run those fingerprints through the system, he will find out that this guy is none other than Sonny. Unfortunately, there will be some problems that wouldn’t let Sonny get identified. So, he won’t be coming back home anytime soon.

This is Port Charles, so nothing comes in without some drama. Valentine’s Day 2021 will bring some drama too. Spoilers suggest that Curtis Ashford and Portia Robinson will get closer, but there will be a misunderstanding for Lucas Jones because of that. Michael and Sasha will also plan to go on a date that will go down the spiral. But, on the other side of the town, Nikolas will promise something extremely sweet to Ava.

Ryan Chamberlain Is Back With A Plan

Ava and Nikolas will be out on a dinner date when Ava receives something extremely creepy. That will be a gruesome box that reaches her when she is out on a date with Nikolas. In the ominous note and what comes with it, spoilers suggest both Nikolas and Ava will understand that it has Ryan Chamberlain written all over it.

Of course, the two of them will start wondering how Ryan could have done this when he is suffering from the locked-in syndrome. General Hospital viewers are aware that Ryan is merely faking it. However, Ava and Nikolas do not know that. They think that it is a real condition. Even so, Nikolas will vow that whatever it may be, he will protect Ava at all costs.

Who Could Be Behind This Gift?

While Ava and Nikolas believe that this is something that Ryan might have done, spoilers hint that someone else might be behind this grisly gift and the message. There are a number of characters. The first one on the list is Franco Baldwin. His tumor is back. So, it is possible that his tumor might be making him do all of this.

It is also possible that Peter might be doing all of this to frame Franco. Another possibility is Spencer Cassadine. This name is coming up on the soap opera a lot. Recently Laura Caloons was discussing the name then there is some buzz that the actor might be stepping in Port Charles soon.

General Hospital Spoilers For The Week of February 22-26

In the week of February 22-26, Carly will start getting worried as she knows that Nina is mad and furious. Nina can do anything. So, she will start thinking about what Nina would do next? Also, Jax will reassure Carly. It looks like he might think that he will be able to smooth things over, but that plan wouldn’t work out very well. In more Nina related news, Maxie Jones will throw all her support behind Nina once she comes to know the recent happening. Whatever is going on in Port Charles will push Maxie to break the pact she, Nina, and Britt had made.

Britt, on the other hand, will ask Liesl Obrecht to step down. She will be worried that in order to take Peter down, Liesl doesn’t get herself killed. However, spoilers suggest that Liesl will face a lot of complications than just take Peter down. Maxie will continue to defend her fiancé. As for Robert Scorpio, he will become gloomy thinking about Peter and Maxie’s wedding. He won’t think there is anything that anyone can do to stop that from happening. However, he will go on to complain to Jason.

Rounding off will be Jackie Templeton, who has a clue that Bobbie Spencer might be Florence Grey’s nurse. Another hint would be that Bobbie is working on a private job in Vermont. That will give her a nudge to go and find Florence. So, she would look for Martin Grey and Jackie. They will all make a team effort. These two weeks are true quite action-filled. We will keep you updated with all the news about the soap opera. So, you stay tuned. General Hospital airs on ABC all weekdays.